There have been quite a few missions to libration points. As far as the dynamical possibilities are concerned, libration point vicinity offers a spectrum of orbit profiles. What science data is not available and is relevantly needed by the space science community, that can be fulfilled by a spacecraft placed in an orbit around libration points (Both Earth-Moon and Sun-Earth L-points)? In other words what all relevant science missions can be executed at libration points ?

From the point of view of a space craft at Sun Earth L2, the sun, earth and moon all dwell in the same region of the sky. A small shade could shield heat from all three sources. This leaves almost a full 4 pi steradians of 4 K sky an infra red scope can radiate heat into.

There are many near earth asteroids that can be reached with just a small amount of delta V. Unfortunately launch windows to these accessible asteroids are rare. Windows can be years or even decades apart. Seeing that we have zero experience in asteroid mining, a trial and error process would require multiple missions to a single destination. Rarity of launch windows could stretch this learning period to decades or even the better part of a century.

Also telerobotics is more difficult for rocks in heliocentric orbit. Signal strength falls with inverse square of distance. Therefore good bandwidth is hard when the rock is one or two astronomical units from earth. Light lag latency for a rock on the other side of the sun can be 30 to 40 minutes.

In contrast, the lunar neighborhood enjoys frequent launch windows. Every two weeks from a given low earth orbit. Trip time is less than a week. Light lag latency is about 3 seconds. Signal is hundreds of thousands times stronger than a rock 1 or 2 A.U. distant.

A rock in high lunar orbit makes a much better learning test bed than an asteroid in heliocentric orbit.

If proximity to the earth moon neighborhood makes for a better test bed, why not park the rock in low earth orbit? Here's a screen capture from my blog post on EML2: 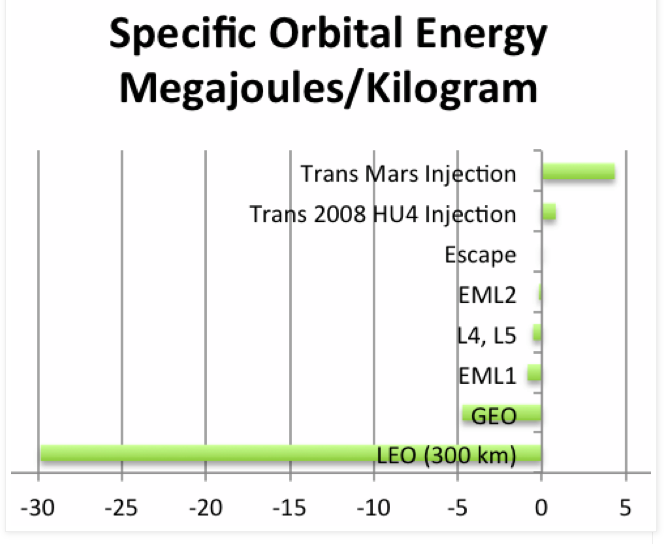 Energetically speaking you can see EML2 is not that far from asteroid 2008 HU4. It is plausible to park a rock at EML2. Parking a rock in low earth orbit, not so much.

Besides EML2, distant retrograde lunar orbits have also been proposed for parking asteroids.

One additional mission that is best performed at a Lagrange point is a solar observing mission at SEL1. This will have good focus on the Sun while remaining near Earth. It also shows the daylight portion of Earth at all times. See also this article on Lagrange Points.

Not the answer you're looking for? Browse other questions tagged orbit spacecraft mission-design lagrangian-points astrodynamics or ask your own question.

27
What were the most inaccurate or accurate things in “The Martian”?

14
If something “falls off” the L2 or L1 point, where will it go?
7
What, if any, libration points exist in systems of multiple orbiting bodies?
12
Low Energy Transfer within Earth-Moon system
3
Why are the Trojan libration points equidistant and not mass weighted?
14
Is this what station keeping maneuvers look like, or just glitches in data? (SOHO via Horizons)
1
Why has the Earth-Sun libration point L1 been chosen over L2 for NEOCam to detect new NEOs?
5
What are the future prospects for spacecraft autonomy
7
Does it even make sense to talk about Mercury's triangular libration points (L4, L5)?
41
Why are so many space telescopes placed in LEO instead of at Lagrange Points? And why do we hear about Hubble more than any Langrange-orbit telescope?
2
Who called the Lagrangian points as “Libration” points and and why was the terminology “Libration” used?