Why do some rockets jettison their boosters much after they are burned out?

For example: Japanese H-IIA rocket only jettisons its boosters 10 seconds after burnout, which I image would waste fuel as the spent boosters are like "dead-weight" dragging the rocket down. So why don't they jettison the boosters right after they burn out like many other rockets do? Thanks.

"Weighing 77,000 Kilograms, each SRB-A is 2.5 Meters in Diameter and 15.1 Meters long. The Boosters burn for the first 100 seconds of the flight and are jettisoned 10 seconds after burnout."

The jettison of spent boosters depends on a number of factors like the design, safety etc.

The Japanese H-IIA has a rather unique design, where the thrust developed by the solid fuel rocket motor (SRB-A) passes through the thrust struts and is received by the lug which forms an integral part of the cross beam fixed on the LE-7A engine. 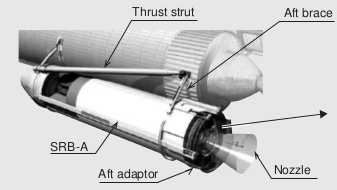 Image from Successful Return to Flight of the H-IIA Launch Vehicle by Takashi Maemura et al.

The jettison procedure is initiated when the combustion pressure reaches 2%. The forward and aft yaw braces (which transfer the radial component of thrust) are cut off by the ordnance system, and the booster assembly (that is held by thrust struts) departs from the launch vehicle, and is completely separated after about two seconds at the point where the thrust struts are cut off. 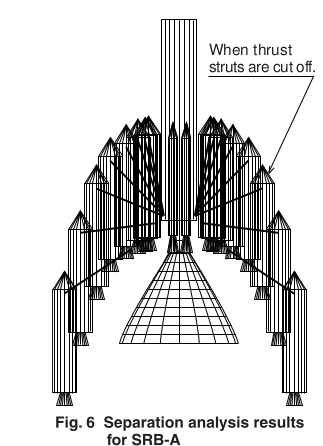 The main concern during jettison is safety, so that (either of) the boosters don't have any residual thrust while the jettison process is under way. otherwise, the transfer of thrust through the thrust strut will make the vehicle unstable.

Another end of delayed separation is the Delta II rockets, which carry their spent casings till they reached their preset drop zones (well after burnout) to clear offshore oil platforms.

17
For a typical Shuttle mission, how much solid fuel is leftover at SRB separation?

17
Why is the Russian approach to the aerodynamics of their rockets different?
14
Is it possible for the Space Shuttle Solid Rocket Boosters (SRB) to hit the Space Shuttle after jettison?
27
Why do some rockets not ignite all their engines during liftoff? (GSLV MK3 LV)
5
Why are some rockets orange?
7
Are side boosters sometimes angled even if they are symmetrically arranged?
6
Why exactly didn't they jettinson the boosters direct after burnout at the Starliner launch?
7
What happens to the parts of rockets after they burn up?