Is it feasible to launch spacecraft/payload by water steam generated by a nuclear blast? [closed] 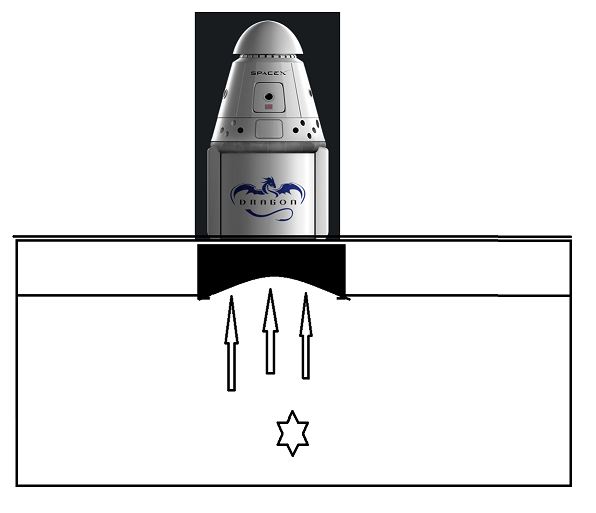 The Spaceship with a concave bottom is kept on top of a hole which contains water. A nuclear blast then converts the water to steam which gives the thrust to the spaceship.

My question is that is this method feasible, if not then why?

First, heavy water and its steam would rather dampen the blast than amplify it. It's not how thermonuclear charges work. But that's a technicality...

If you want to deliver raw materials into space, this is semi-viable (incurring a significant loss during travel through the atmosphere as the outer surface will melt into plasma). But with proper ablators, heat shielding etc, it would be somewhat doable, though not easy. And there's risk of significant irradiation of the cargo.

If you want to deliver anything slightly fragile (say, more fragile than a solid block of of steel) it will shatter due to impact of the blast, the acceleration exerting force of a concentrated thermonuclear blast.

No humans, no electronics, no rocket engines, no systems or structures.

And due to lack of these it won't be able to circularize the orbit once above the atmosphere, so unless you launch it at a speed that would allow escape from Earth's gravity, it will just fall back to Earth, even if it was to cross Moon orbit on the way. Simply, any "orbit" achieved by a single, point acceleration passes through that point (approaching from the opposite side) - and since that point is on Earth surface, it means the payload will hit Earth somewhere "on the other side".

Although, as I wrote - this is semi-viable. At higher orbits the energy to change orbit (circularize) is relatively low, so if the payload was encountered by an orbital "tug" that could give it an acceleration (or some kind of propulsion was developed that would survive the nuclear blast) - yes,the payload could be brought to orbit.

Not the answer you're looking for? Browse other questions tagged launch rockets advanced-propulsion or ask your own question.

8
What are the deal-breakers with a preheated Hydrogen gas tank orbital rocket?
5
By how much may the maximum payload mass vary without causing a launch failure?
11
What would make a rocket sled launch feasible?
5
Splitting water quickly to turn a water rocket into a H/O rocket at launch: could it work?
9
Would a nuclear propelled spaceship still need a storm shelter?
5
Most recent launch of a nuclear reactor, and current barriers to launching the next one?
3
LANTR has been proposed; why not bilateral CHEMANTR?