If one equipped the SRB like the ones used with the Shuttles with minimal attitude control systems and launched it as a standalone rocket with no payload - what speed would it reach? Would it be capable of entering the Low Earth Orbit?

More generally, what is the viability of (staged or not) SRB-only launch vehicles?

No, a quick calculation yields a $\Delta v$ of about 4.6 km/s and you need about 9 km/s to get to low-Earth orbit. You'll lose a lot of that velocity to aerodynamic drag as well as the vertical portion of the flight, so a rough estimate of the final speed at burnout would be somewhere around 3 km/s -- or about 10,000 km/h.

Using the specifications from the SRB Wikipedia article (which admittedly have some conflicts): 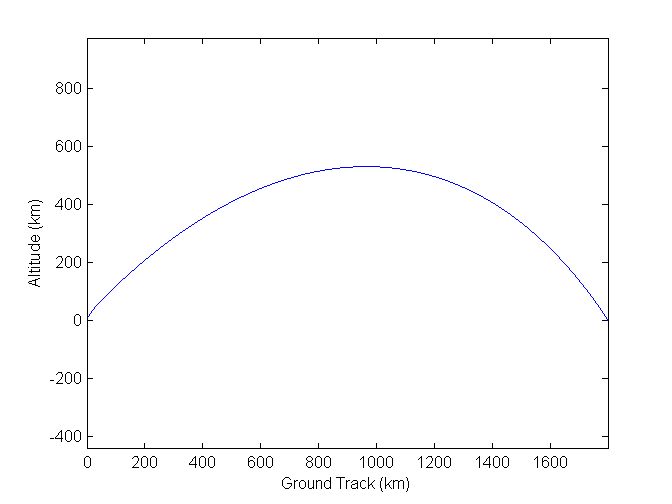 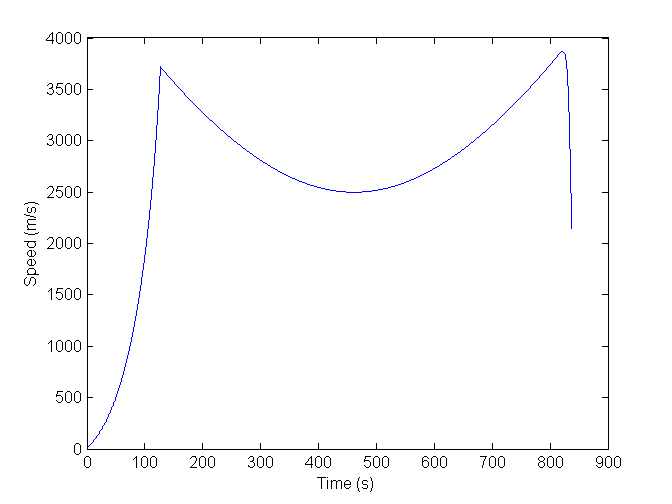 Here is a look at the pitch, flight-path angle (direction of motion), and angle-of-attack (difference between pitch and flight-path angle) as a function of altitude. Although it might seem strange that the rocket starts pitching over after only 100 m of flight, this is necessary to start gaining enough velocity to reach orbit -- the rocket is still climbing throughout most of the flight. 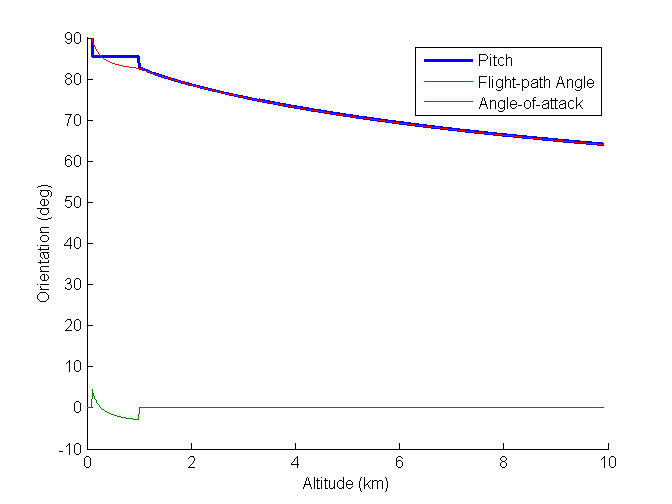 Note that I'm using a simple atmospheric model for the air density:

Then thrust is computed from the specific impulse and mass-flow:

Note that the equations of motion in 2D are:

Where $r$ and $\theta$ are the polar coordinates about the Earth's centre, $m$ is the vehicle mass, $\phi$ is the vehicle pitch and $\gamma$ is the flight-path angle (velocity direction) -- both of those angles are with respect to the local horizon.

As for all-solid fuel launch vehicles, there are a number of them that have been and are still in use (such as the Minotaur family). But, as LocalFluff pointed out, they are usually only sensible for smaller payloads. Lunar Prospector was launched to the moon on an all-solid Athena II although it looks like the upper stage used hydrazine (not solid, but not a complex liquid motor either).

The Ares I-X was a modified STS SRB with with an upper-stage simulator. So far as I know, this was the only standalone launch of SRB hardware. Even the original SRBs were not flight tested before manned launch.

The Ares I-X flight had an apogee of 46 kilometers, less than half the 100 kilometer altitude of the Karman line, which is considered the edge of space and below which orbital trajectories are impossible due to air resistance. Due to the rocket equation we can clearly see that no amount of stacked SRB components would so much as double the altitude, therefore we can conclude that a single SRB could not fly alone to orbit.

User SF. calculates that a staged SRB may be able to launch considerable payload to orbit:

Here is a video of the launch, complete with on-board camera views:

Not the answer you're looking for? Browse other questions tagged low-earth-orbit srb or ask your own question.

39
Has humanity launched a SSTO ... ever?
11
Have SRBs or SSMEs ever launched without a space shuttle?
6
Is it unusual to vector the thrust from an SRB?
4
How is the process of launching a rocket mathematically modeled up front?

11
How risky is launching a rocket during a geomagnetic and solar radiation storm?
10
How could we make a fair comparison between space rockets regarding their payload mass in low Earth orbit and Earth escaping?
14
What was the first time a "re-used booster" was used to put a payload into orbit?
13
Was a method available to save the Challenger Crew?
1
Could a sounding rocket or a space gun payload at apogee be put into orbit with a rocket impulse from there?
16
Was SpaceX's launch of Formosat-5 more vertical than normal for any particular reason?
10
How are SRBs and solid rocket motors transported safely? Do they ever end up on trucks driven down public highways?
3
Is SLS capable of launching the core stage into LEO?
3
Is New Shepard an orbit-capable first stage? Could an (albeit small) 2nd stage with propulsion be put on top that could put a smallsat into orbit?