What is the highest power output ever achieved with an ion thruster?

I was curious while designing a spacecraft for doing a flyby of the solar gravitational focus. I know that power is currently the limiting factor for ion drives (since solar power and radioisotope batteries are still the predominant energy sources for them, and both require considerable area or mass to reach power levels above 1 kW). But still despite that, this is not a problem for ground testing ion thrusters, and 1 MW power levels could be attained during ground testing. While most people assume higher power can be easily handled, I know from personal experience that at those high power levels, effects like erosion, wall impacts, and cooling will become big problems.

Also related, what is the highest Isp achieved by an ion thruster? I know for a fixed power, higher Isp means lower thrust, and that is ultimately limited by acceleration voltage, but still I am curious.

I know that the question is a bit old, but I find it very interesting. So let's go. First of all, I should say that I can't guarantee that I will present the highest numbers of all, since research is continuely going on. But let's give it a shot.

We should recall the equation of thrust efficiency, $\eta_T$,

Where $T$ is the thrust, $I_{sp}$ is the specific impulse, $P_{in}$ is the input power and $g_0$ is the standard gravity acceleration. Then, yes, you are right: with a fixed $\eta_T$ and $P_{in}$ more thrust means less specific impulse.

Another important metric here (you will see why) is the thrust-to-power ratio, which is defined by the same equation simply as

Depends on what you define as power: average or instantaneous.

Average power is usually considered when talking about steady-state thrusters, as Hall effect thrusters (HET), Gridded ion engines (GIT), Field-emission electric propulsion (FEEP), the VASIMR (I will not speak about it here since you already cited it), etc.

The thrusters types that achieved highest power in ground testing are HETs and Arcjets.

The X3 Nested Hall Thruster (NHT) developed by NASA and the University of Michigan achieved about 30 kW. The plan is to operate it up to 100 kW.

Since in the pulsed regime one can discharge a great amount of energy stored, for example, in a capacitor bank on a short amount of time, the instantaneous power a in pulse can achieve very high power levels without many complex equipment. This happens because most of the high power cabling will be only between the thruster and the capacitos. The charging of the capacitors can be done by a "lower power" and less expensive rig.

In this spectrum, MPDs usually achieve the highest power levels: at Princeton, researchers reported MPDs operating at power levels up to 15 MW in pulsed mode, at NASA up to 10 MW, and in the Osaka University up to 6 MW.

A group at Los Alamos tested an experimental thruster called "coaxial thruster", with a power input up to 40 MW.

Because of their great scalability, many authors consider the MPDs very good candidates for interplanetary transportation.

The theoretical maximum specific impulse can be achieved only by a photonic thruster, that generates thrust by emitting photons at the speed of light, thus $I_{sp} \approx 30559883.50$ seconds. But I'm sure this was not the kind of answer you were looking for.

Considering only common thrusters, the types that generated highest specific impulse on ground testing were FEEPs and some experimental GIEs. Note that both of them accelerate charged particles by the direct application of an static electric field.

ESA claimed to achieve about 14000 seconds with their experimental Dual Stage GIE.

It is claimed in literature that FEEP thrusters can achieve up to 12000 seconds, but I didn't find any example. But, for example, a group from Austria reported specific impulse values up to 8000 seconds.

In 2014, the european company OHB published some very interesting plots showing the performances of some the most important propulsion systems that have been ground-tested until that time (It's not clear in their presentation if all the thrusters shown were actually tested).

The first shows a simple plot of Power against $I_{sp}$ and you can see that the behavior is consistent with what I commented before.

The second figure is a plot of the thrust-to-power ratio against $I_{sp}$. The behavior of the constante efficiency curves are modelled by our first equation. Thus there is a top curve of $\eta_T=1$, and the performance of all thrusters should remain bellow that. 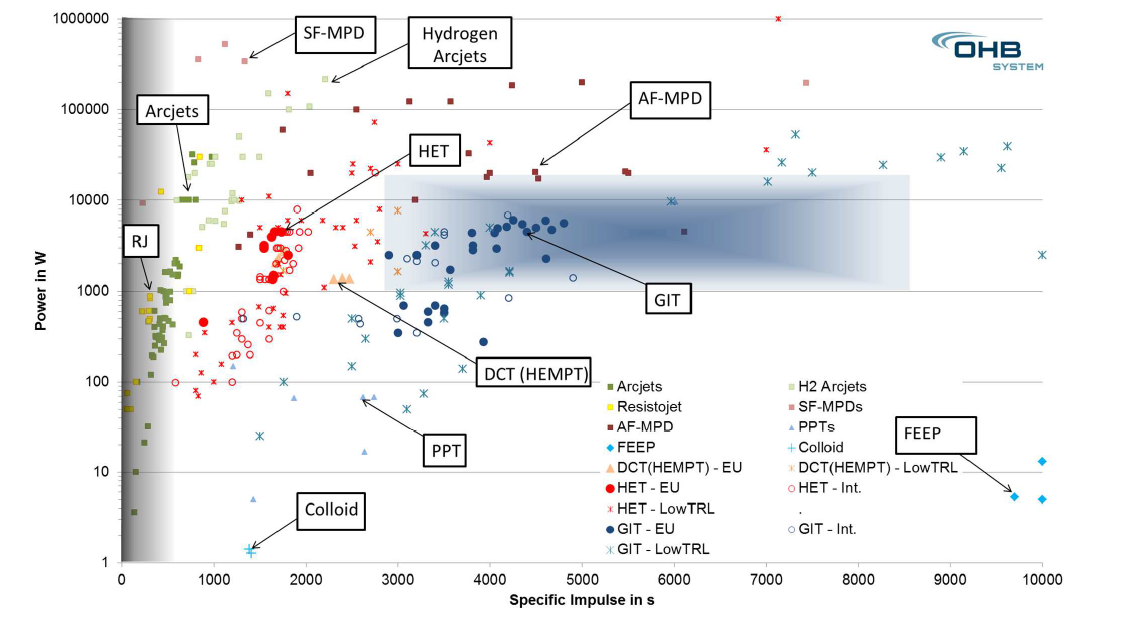 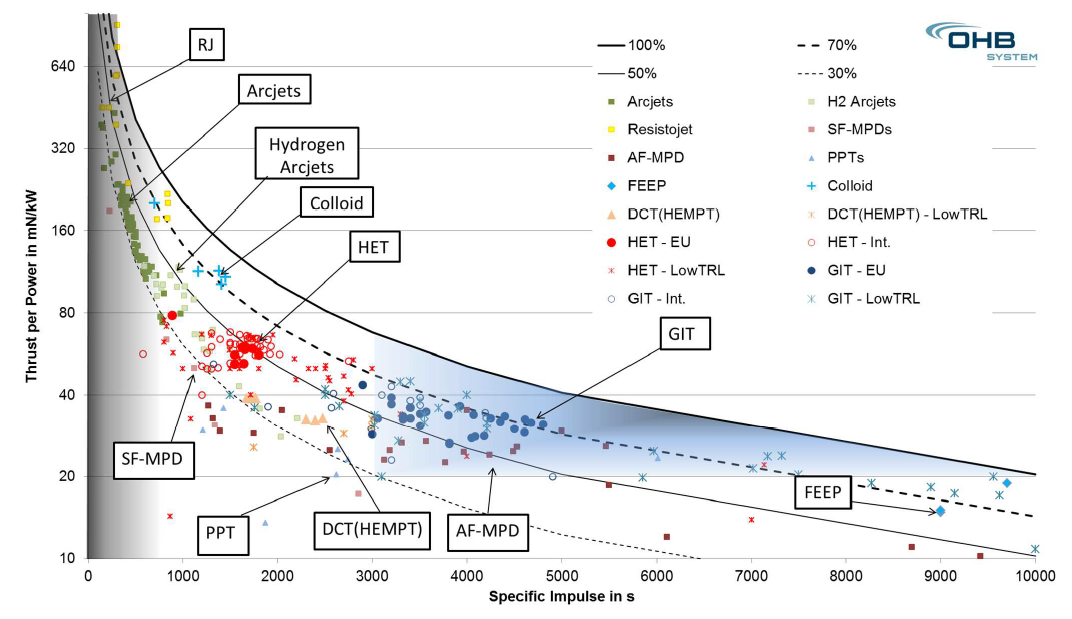 Both pictures were taken from: Peukert, M. and Wollenhaupt, B. "OHB-System‘s View on Electric Propulsion Needs", EPIC Workshop, 2014.

OBS: As soon as I find more info about other high-power thrusters I will update the answer.

Not the answer you're looking for? Browse other questions tagged propulsion ion-thruster record or ask your own question.

21
Can ion thrusters be scaled up?
2
Could chemical energy quicken ion propulsion?
9
What limits thrust-to-weight ratio of ion thusters? (beside power density of energy source)
5
Will the Neumann drive start testing aboard the ISS some time in 2018?
5
Ion thruster grid material
1
Neutralization of ions in the ion thruster
12
Highest DC voltage ever intentionally produced in space?
3
Estimating thrust and kg fuel for a generation ship's journey to Alpha Centauri
2
Can external plasma enter the chamber of an ion thruster?