Why don't rockets drive the turbopump from the combustion chamber?

As I understand it, liquid-fueled rockets typically burn some amount of their fuel in a separate low-pressure combustion chamber, and then use the combustion products produced to drive the turbopump. High-efficiency engines then pump this exhaust into the rocket's combustion chamber to ensure complete combustion and get more efficiency from the engine.

Would it be feasible to instead use some of the high-pressure gas from the rockets main combustion chamber to drive the turbopump, having passed it through a nozzle to reduce the pressure?

edit: I extracted this schematic with example pressure and temperature numbers from this link 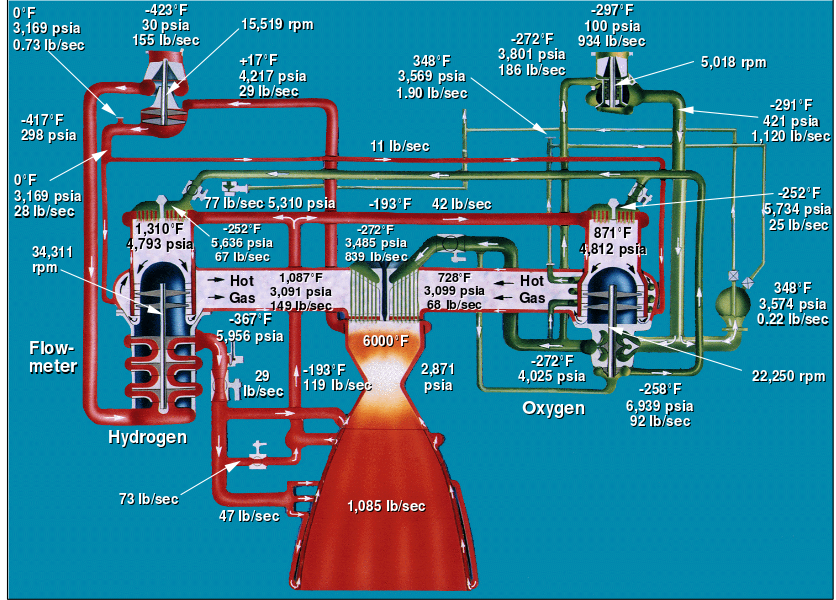 The main reason for this is the temperature. Depending on the actual fuel the temperature in the main combustion chamber can be above 3000K. However, in the gas generator the temperature is kept below 1400-1600K. These lower gas temperatures allow uncooled chamber construction and prevent melting or limit the erosion of turbine blades.

There is one flight-tested engine that uses the design you're suggesting: the Blue Origin BE-3. It is a liguid hydrogen/liguid oxygen fueled engine that produces 110,000 lbf of thrust (throttleable to 20,000 lbf). It powers the New Shepard suborbital launch vehicle, which was first flown on April 29, 2015, and then contributed in the first ever soft vertical landing of a rocket returning from space on November 23, 2015. It is also being considered for use on the ACES upper stage for ULA's Vulcan rocket.

The BE-3 is the first tapoff engine to fly. We’ve designed a simple rocket engine, where hot gasses from combustion are tapped from the main combustion chambers and fed back to spin the turbopumps in flight. Having only one combustion chamber with a single ignition event enhances reliability.

I have no information on how they achieved this, as the high temperatures of the gasses in a combustion chamber (6,000+ºF) make it a challenge, like other people have mentioned here. Blue Origin is a notoriously secretive company and hardly releases any information about their operations, let alone information about the design of their engine.

I believe you are describing the combustion tap-off cycle.

The J-2S engine from the Apollo era did this (but was never used), as well as the BE-3 mentioned earlier.

Not the answer you're looking for? Browse other questions tagged rockets engine-design engines liquid-fuel combustion or ask your own question.

11
What is the temperature inside a methane/oxygen rocket engine?
4
In turbopump designs where no propellant is dumped overboard what causes efficiency loss in engines?
3
Limiting factors of liquid rocket engine thrust
12
Rocket Engine Plumbing: Still don't understand the Full Flow Staged Combustion Cycle
6
Is there a way to make liquid fueled rockets not lose efficiency with decreasing throttle?
6
Why do larger and newer rockets not use electric pumps?
2
Why would one assume chamber pressure instead of chamber volume when designing a rocket engine?
5
Why don’t any engines use turboelectric oxidiser pumps?
5
Is there a distinct flame-front in a liquid-fuelled rocket combustion chamber?