What is the potential limit extraterrestrial life can survive and under what factors?

A lot of material about extraterrestrial life seems to suggest that life essentially cannot survive in environments with more radiation beyond what's on Earth. For example, when red dwarfs planets are discussed, the fact they seem to have more flares and radioactive output and the planets are closer, therefore it's assumed by some life is unlikely.

I've seen this as the case too with life coming near the surface of Europa, and of course being on the surface of Mars (assume any was actually there).

It seems to me that a few things are often overlooked or ignored:

Are these things considered when thinking of the potential in the same way it often seems to me that (up until recently) atmospheric thickness and planet size wasn't even considered to be a factor in placement in the goldilocks zone?

Is there a known absolute maximum level of UV or other radioactivity that all Earth-DNA can stand, and are these logical to assumed the same elsewhere?

The Goldilocks Zone is indeed a rough approximation of the region in which a planet may be habitable. It essentially evaluates the stellar energy output in the context of a planet like Earth -- how close or far could you move the Earth within that system in order to still maintain habitable temperatures. The Planetary Habitability Laboratory at the University of Puerto Rico (at Arecibo) has a great graphic to put some visuals (I know this is tangential to your question, I'm getting there...): 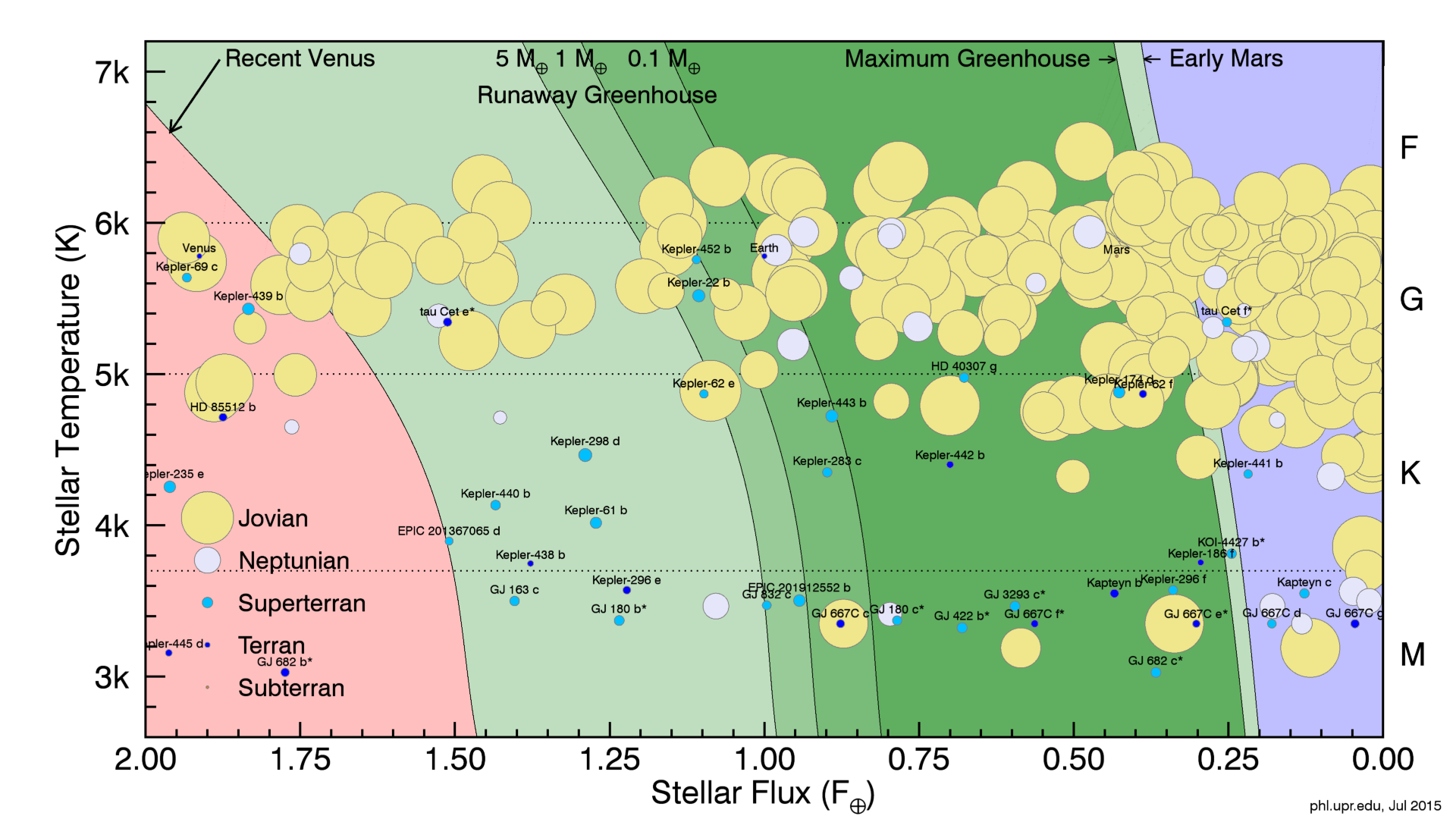 If you go to the webpage from where I sourced this image you will see a chart listing various habitable planet candidates. It is listed according to the "Earth Similarity Index", which accounts for stellar flux as well as planet mass and radius. The reason it is listed in that order is directly linked to your question: the Goldilocks Zone is really looking at where an Earth-like planet could be habitable. So they are accounting for planet size, and you can also see in the definition of the equilibrium temperature that they admit that exoplanet atmospheres are unknown and thus an Earth-like atmosphere is assumed.

The RationalWiki article on astrobiology points out another important factor: icy moons like Enceladus and Europa that are heated by tidal friction are also considered to be in the Goldilocks Zone. Therefore, the Goldilocks Zone could be considered to have extra "pockets" around places such as those moons. Arguably, ozone layers and magnetospheres are also considered when evaluating habitability -- as more information about the planet is gathered and processed, every new clue is added to the analysis.

It is also possible that planets inside the Goldilocks Zone may be inhabitable. For example, tidal locking may cause wild climate effects... although recent work suggests that may be less of a problem.

Onto your next point about radiation resistance. Welcome to the field of astrobiology! Studying life that can thrive in extreme conditions is essentially all that an astrobiologist does. You mentioned radiation resistant bacteria, there is also radiation resistance fungus which had been discovered thriving around the Chernobyl disaster site, and the tardigrade is an example of an actual animal that can withstand around 1000 times the amount of radiation as other animals.

In my opinion (caution, I'm not an astrobiologist by training), the rate at which new discoveries are being made regarding extreme survivability of life on Earth suggests that something as simple as a minimum/maximum distance from a particular star is insufficient. So I think your question itself is part of the answer, it is an ongoing debate.

Not the answer you're looking for? Browse other questions tagged astrobiology exoplanet or ask your own question.

8
DNA or even life in vacuum of space
4
Why do we search for extra-terrestrial water?
13
Melanized fungi on the ISS - are they 'enjoying' the elevated radiation levels there?
11
Could there be liquid hydrogen oceans on the surfaces of worlds (including frozen gas giants) in the distant Kuiper belt or Oort cloud?
3
What harm could perchlorate consuming bacteria do to potential native life forms on Mars?
7
How did Spirit and Opportunity identify ferric sulfate and jarosite on Mars?
5
Life on Mars: How do we know it is not from Earth?
41
Why are we trying to prevent life from spreading via landers rather than actively encouraging it?