Could you hear the sound of your own body in the vacuum of space?

I think the answer to this question probably lies more in biology than astrophysics.

If you were in space with an oxygen mask on (ignoring the fact that you will get quite cold for the moment) you wouldn't be able to hear sound transmitted through the air (or lack of it). But from the experience of standing in an anechoic chamber, when outside noise is removed you notice more the internal sounds of your body.

So would you be able to hear your blood pumping, lungs, etc whilst floating in the vacuum of space?

Your ear drums are connected to your ear canal, and vibrations are also passed to it by that means. So they would perceive your heart thumping in a terrified panic, and your lungs trying to haul in some air from the oxygen tank, though the seal on the mask better be good or most of it will escape into the vacuum.

But your eardrums won't last long. They will rupture under a pressure difference of more than 5 to 10 psi. Atmospheric pressure is 14.7 psi, so if you hold your breath, or hold the mask on tight and get all its air, they will explode. 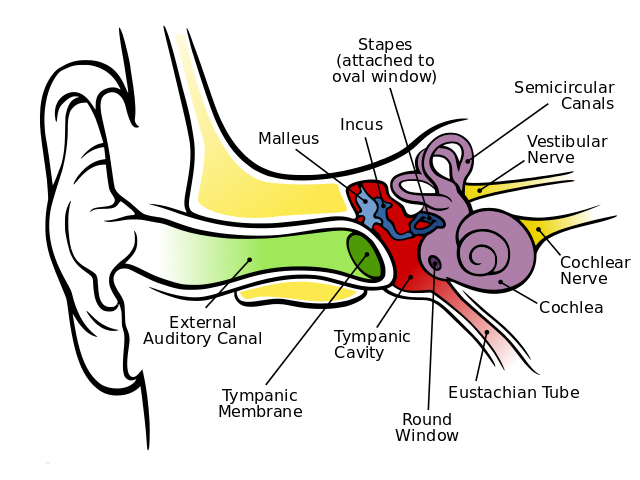 You will still hear a little, as it is the inner hear which actually does the hearing, and it will still receive vibrations from surrounding bones. (That's the purple part on the diagram.) Until the round window, which is a membrane on the cochlea, also bursts. It might last longer, and after it bursts it might take a few seconds for the fluid inside it to boil away. The cochlea needs that fluid to pass vibrations to tiny hairs that then trigger nerve endings, which is what your brain interprets as sound. During that time you might not hear your heart pounding any more, but you could probably hear yourself scream, for instance, in a dim, distorted way.

If you had planned for this though, and used an oxygen system that was only 4.4 psi of pure oxygen, that would be enough for your body's needs and wouldn't explode your eardrums. Then if you spent adequate time in a specially designed airlock, that also held pure oxygen at that pressure, your body would expel the nitrogen from its bloodstream so it doesn't bubble as soon as you are in vacuum and kill you. Then you could perform this experiment and survive, if it lasted no more than a minute or so before you retreated back into the airlock.

Note also, that you wouldn't necessarily get cold. If you were near Earth and in sunlight, your sunlit side would get very hot. But that wouldn't be much of an issue in the time span considered.

Not the answer you're looking for? Browse other questions tagged vacuum life sound or ask your own question.

-1
So if I could shout in space, no one can ever hear me including myself?

8
Is there any type of mechanical bearing that can be used in the full vacuum of space?
16
Could the void of space act as a good refrigerator for food in long journeys?
7
Could you "hose wash" a space suit on the Moon or Mars?
8
Which earth-based lifeforms can survive the vacuum of space?
6
Has any living thing been directly exposed to the vacuum of space
10
Could there be any use with importing vacuum from space to Earth?
3
Can mushroom spores survive the vacuum and radiation of space?
8
How do you test-fire vacuum engines in a vacuum chamber? Why doesn't it fill up almost instantly from the exhaust and spray (deluge) water?