Is space mining and development as shown in the television show “The Expanse” realistic?

In the television show "The Expanse", we see the Solar System having been partially colonized and developed during the 23rd century. The spacecraft in the show appear to depend on conventional chemical rocket engines (or possibly a much more efficient high-thrust ion drive). Ceres has been colonized as a primary station within the asteroid belt and various spacecraft are depicted as hauling ice from other parts of the Solar System. In particular, we see an "ice hauler" spacecraft in orbit around Saturn which then departs to return to Ceres.

Although there has not been any explicit timeline shown, it is essentially implied that this type of mission is commonplace and simply a way of life for many of the colonists (known as "belters"). However, considering the expected trajectories for transferring between Ceres and places such as Saturn, I would have thought that it would be unrealistic to expect a crew to commit to this kind of lifestyle -- most importantly the time it takes to go back and forth between those two locations (or others).

A Hohmann transfer from Ceres to Saturn would take about 7.64 years (one-way) at a minimum Delta-V of about 7.57 km/s, but you can reduce that duration immensely at the cost of more fuel by transferring with higher-energy trajectories. Here is a plot of the one-way transfer time as a function of Delta-V:

Note that a Delta-V above 19 km/s corresponds to an escape trajectory from the Solar System. 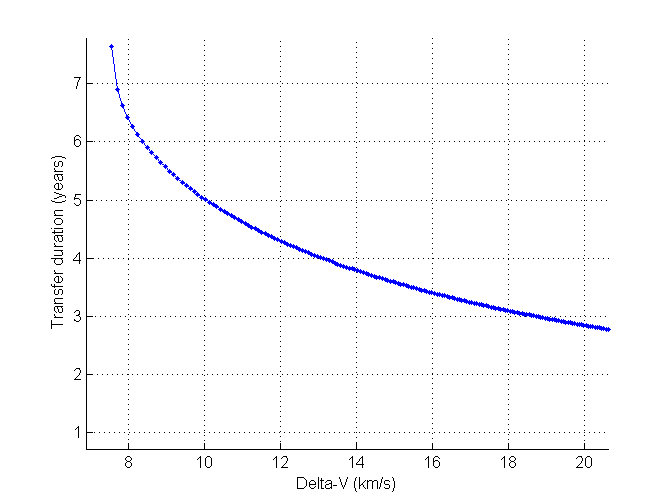 And here is a look at the family of trajectories -- each rendezvous with Saturn occurs at the same anomaly location, whereas the departure anomaly from Ceres varies. I'm assuming that Saturn and Ceres are in circular orbits (they have eccentricities of about 0.055 and 0.075, respectively), and that they are coplanar (Ceres is at about 7.5 degree inclination compared to Saturn, so that is not insignificant but neglected anyway). 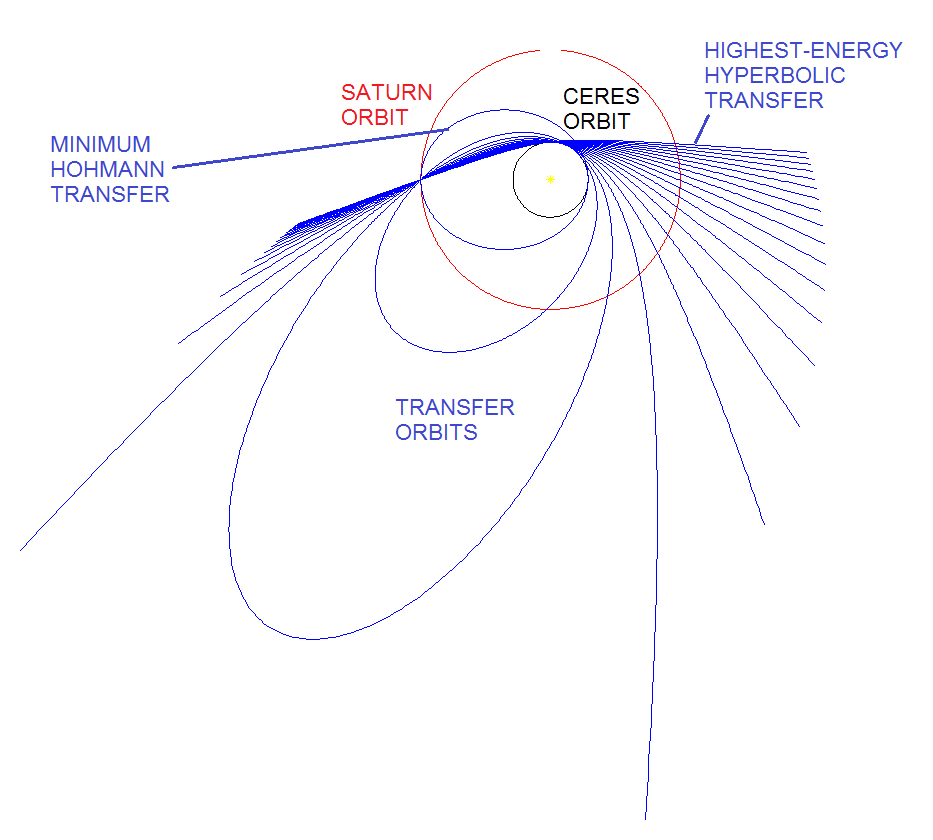 So what we see here is that a mission from Ceres to Saturn and back would take somewhere between about at least 4 years and at most about 15 years. Clearly there are careers on Earth that take people away from their homes and families for a year or two at a time, but the travel time for these missions does not seem like something that would be undertaken as a career choice. Does this suggest that the kind of rough-and-tumble crewed space mining concepts are unrealistic?

This question is rather broad, so I'll say that answers should really focus on (a) the elements of propulsion and orbital mechanics that define how long these transfers would take, and (b) what kind of outlook we might expect for manned spaceflight as a career (probably most comparable to tours in the military or jobs at sea).

Short answer: Maybe, if you allow for an engine like used in the series.

The spaceships in The Expanse do not use Hohmann transfers. Instead they just start to accelerate continuously to the point of intercept with their target, flipping midway and deccelerating again. This reduces both traveled distances (because your path is far less arced) and increases average travel speed, both reducing travel time by large amounts.

This type of travel is available because the ships do not use "conventional chemical rocket engines" but something called a epstein-drive. This is, according to the books, a high efficiency fusion engine.

How efficient would we have to get this thing to do maneuvers like in the series? Let's do some numbers:

A typical travel in the books is in the order of a two week travel, accelerating with 1/3 g, flipping over midway. (this maneuver would bring us from Earth to Jupiter, if Jupiter/Earth is roughly at their median distance.)

Obviously, our rockets can't do this at all. But remember the epstein drive! Fusion drives are in the very early development state here on real Earth...but Wikipedia gives us some numbers for a prototype here: https://en.wikipedia.org/wiki/Fusion_rocket

700 km/s exhaust velocity is stated there, let's see what this gives us:

Exhaust velocity/Earth gravity gives us the Specific Impulse of an engine, which basically tells us how much fuel we have to spend to change our speed by an set amount.

Using this site:
http://www.quantumg.net/rocketeq.html
we can find out how much delta V we get for a rocket of weight X, with fuel y available and a specific Impulse of z.

So no direct continuous thrust travel to jupiter...but we can always add a coasting phase into the middle. and if we want "only" to go from Mars to the asteroid belt...and assume that our Wikipedia-fusion-drive can be upgraded a bit...

So the answer is: Maybe not exactly like in The Expanse. But if we get any type of fusion drive working we will use maneuvers much closer to the expanse-like travel than to our current "fuel-save"-mode Hohmann-transfers.

I'll start by mentioning the times and acceleration given in the books for this series. The claim is that this ice hauler is capable of 1/3 G continuous acceleration, and in fact much higher acceleration is possible (mentioned in the attempt to escape incoming missiles, but no numbers are given). A claim is also made that the ship makes 2 round trips a year.

Given that a relatively high constant acceleration is used an elliptical orbit is not a good model for this travel.

I do not know how to model orbits with continuous acceleration, so i will fall back on straight line travel just to demonstrate what 1/3G makes possible.

Ceres and Saturn have orbital radii 445,410,000km and 1,509Gm (as per Wikipedia), which gives 1,954Gm apart at the farthest distance. Assuming the ship accelerates for the first half of the distance at 1/3G and then flips to apply the same accel in reverse we get a travel time over a straight line of 25.4 days by the following method:

We must double this time again to get the round trip of 51 days, small enough to achieve the authors claim of 2 round trips a year.

The trip times calculated allow us to compare this to existing sea freight times such as 2 weeks to 1 month for crossing the Pacific as given at the following site: https://www.reference.com/business-finance/long-cargo-ship-china-united-states-b7c6214e137c2e0a

Who pays for medical care at sea while working a cargo ship? What happens if I quit my job part way through a voyage? Is my employer required to drop me off at the same port they picked me up? Issues of mutiny and discipline? Any other considerations?

I am aware of a number of problems with my answer, like the travel path going through the sun, the failure to match the origin or destination orbital velocities and the general ignoring of orbital mechanics in an orbital problem. But these numbered were only meant to give an order of magnitude to discuss the affects of the voyage on career choices.

See this article for details on these engines.

Not the answer you're looking for? Browse other questions tagged orbital-mechanics future-missions mining time or ask your own question.

9
To what extent could a single Triton flyby slow down a direct Hohmann transfer to Neptune for NOI?
11
Low Energy Transfer within Earth-Moon system
1
Titan trajectories options
1
Transfer to Capture Orbit Delta-V
2
A laser can propel a spacecraft to 20% of light speed, time shorter on spacecraft?
2
How can I find the time of flight between spheres of influence?
6
Terraform via moving Ceres To Mars orbit, using ion drive
15
What target is the most difficult to reach in the solar system?