A possible way of heating up Mars is to use mirrors to direct more sunlight towards the planet. I am not asking about the feasibility or cost of such a gigantic project, but I have a question regarding the placement of the mirror in order to make it stay in place. If the mirror is placed trailing behind Mars, the light pressure required to compensate for the gravity of Mars is also adding a component force vector accelerating the mirror outward. 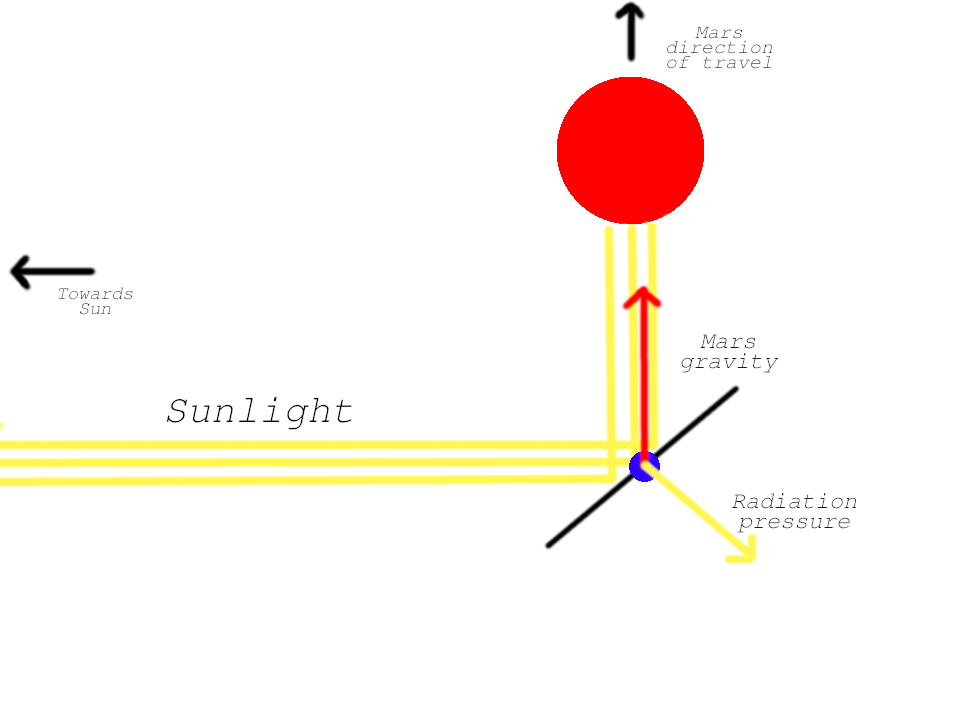 There are two different locations were this is not a problem, between Mars and the Sun, and directly behind Mars, both relatively useless for directing more light towards Mars.

I wonder, can the mirror orbit in circles outside the shadow cone, thereby adding the missing compensating force by inertia?

Is this possible? And if not, are there other ways of placing it?

edit: I am not looking for a solution were the mirrors orbit the planet.

To clarify, I want a location similar to L-points, but that also consider radiation pressure as well as inertia, gravity of Mars and gravity of the Sun, while still pointing the reflected light beam at Mars. In the terminology of Forward, this is a special kind of near Mars statite.

You have missed another option for mirror placement, orbit them around the Mars. In much the same way as Larry Niven's, Ringworld is built. Your circle of mirrors are in a polar orbit of Mars. The mirrors always face the sun and direct the light to the surface of Mars. You might need to do something with the moons of Mars to prevent issues between the moons and your mirrors, but the upside is that they might be good material sources.

There are a couple of potential solutions to this problem. One would be to place the mirrors at a distance just a little closer to Mars than the L2 point and let the radiation pressure counter the weak Mars net gravity field. One doesn't have to be right in line either, but a "halo" orbit circling the Mars/Sun line would allow you to balance forces while avoiding Mars' shadow.

Another option is to use the radiation to "hover" over the poles at the very edge of the Mars gravity field. Again, a halo orbit of this point is a bit easier to maintain than trying to nail a single spot with zero relative velocity, but I'm fairly certain these types of halos aren't stable so they would need constant maintenance.

Finally, instead of a single flat mirror, one could employ a compound mirror like a Cassegrain telescope and use a halo orbit about the L1 point to redirect light that would otherwise miss the planet. The compound mirror preserves most of the light momentum so you only have to space the halo orbit a bit higher than the L1 point. To counteract the tendency to spiral out as a result of redirecting the beam on to the Mars, one could include a little additional mirror surface to spill some light away from Mars.

And, as mentioned, the use of a Fresnel lens at L1 is also workable and has been described in several books including Kim Stanley Robinson's Red Mars.

To double the insolation on Mars would require a mirror or array of mirrors with an area, projected onto a plan perpendicular to the Sun-Mars line, equal to that of Mars itself divided by the efficiency of the system. In principle, there appear to be three places where such a reflector could be: the first or second Lagrange point or a Sun synchronous polar orbit. In all three cases, the projection of the mirror system on the plane perpendicular to the Sun-Mars line would be an annulus with an ID slightly larger than Mars, say 8,000 km, and an OD of about 11,000 km, depending on the system's efficiency. As discussed below, only one of these is potentially feasible.

One of the few Earthling friendly features of Mars is its day-night cycle which is very close to that of Earth. If the mirror system were placed at L2, illuminating the "dark" side of Mars, it would eliminate the day-night cycle. If it were in a dusk/dawn Sun synchronous polar orbit, the terminator would be brightly illuminated by a band of light about 1500 km wide. The only position that would retain the normal day-night cycle would be L1.

At L1, a cylindrical mirror system seems reasonable until you look at the angles involved. The radius at the middle of the annulus would be approximately 4750 km, so the angle from the Sun would be arctan(4750 km/[2.28E8 km-1.19E6 km]) = 0.0012 degrees. The angle from the middle of the annulus to Mars would be arctan(4750 km/1.19E6) =- 0.229 degrees. The sum of the angles is 0.230 degrees, so the tilt of the mirror surface at the midpoint position of the annulus would be 0.115 degrees. The mirror surface would be a section of a parabola that focuses flux from the Sun onto Mars. For the 0.115 degrees angle, it follows the equation y = 0.05274x^2 for x ranging from ±4000 km to ±5500 km. For this range, the total depth in y is 0.75E6 km (!), so an array of mirrors along this surface would not be practical. Alternatively, you could collapse the parabolic surface onto an array of mirrors on a common plane as a reflective analog to a Fresnel lens. As an example, an array of 1 meter square mirrors would be seen from the Sun as nearly end on. As the tangent of 0.115 degrees is 0.002, each 1 meter mirror would collect solar flux over a 1 meter by 2 millimeter area, so would need to be spaced 2 mm apart. Given that the actual mirrors would have a finite thickness likely greater that 2 millimeters, this doesn't work.

The concept for a Sun synchronous polar orbital mirror is shown in Figure 1 below. For simplicity, the sketch ignores the tilt of Mars' axis and the fact that, for the orbit to precess precisely 360 degrees per year, it doesn't go exactly through the poles (Ref 2). The surface of the mirror would be a slice of a 90 degree circular cone. Unfortunately, since the entire mirror could not be magically constructed all at once, it fails because any individual part of it would be unstable. For example, the section shown at the top of the sketch would immediately start rotating clockwise around it's center of mass. It would oscillate back and forth between tilting forward and backward, with the angle damping over time until it became tidally locked in the vertical position. See Ref 3 or any good explanation of tide locking or gravity gradient stabilization. 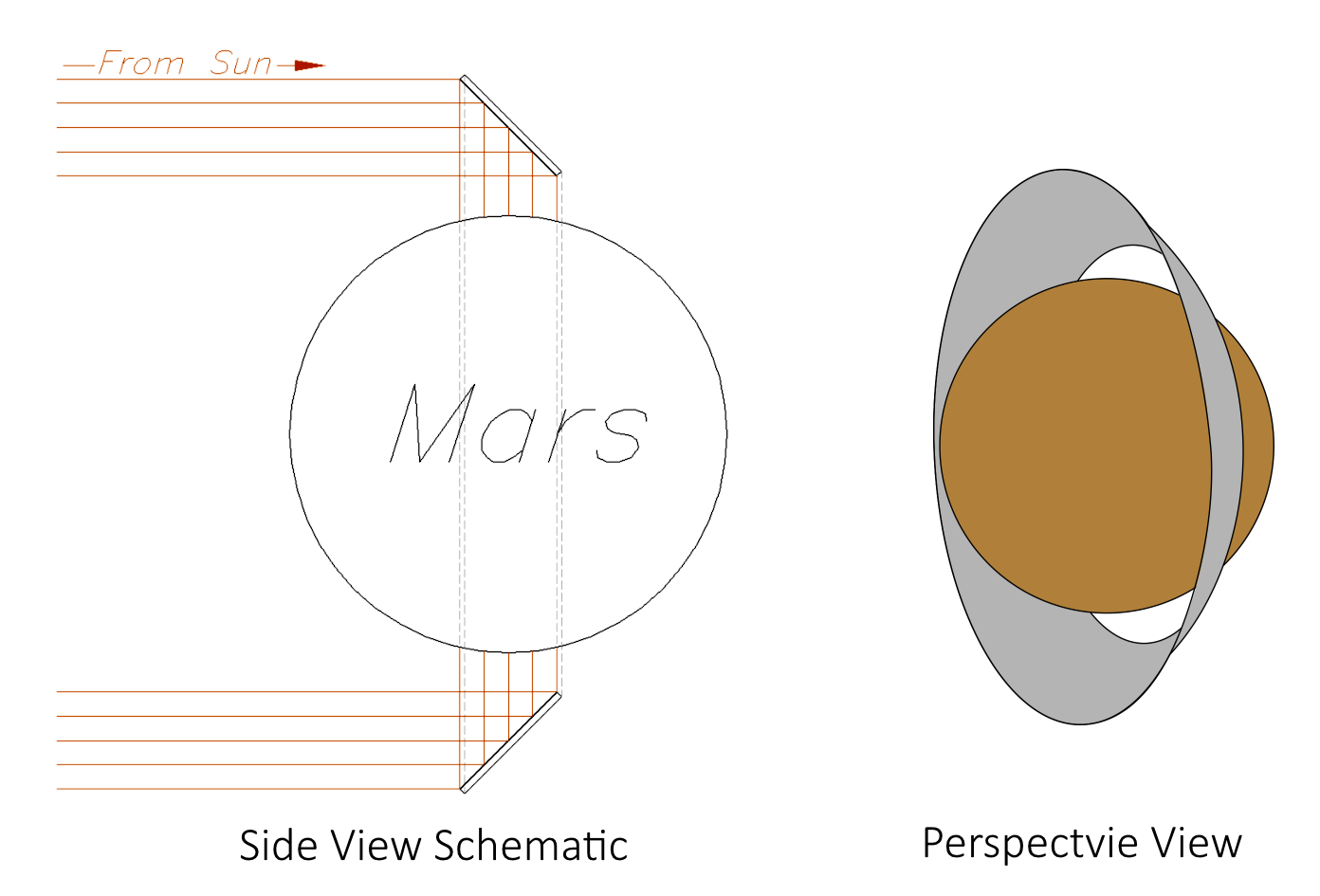 For L2, a slightly concave mirror could be used in a circular halo orbit around L2. If the mirror were collapsed onto a common plane, the concavity is so small that dividing the annulus into five sub-annuli, each with a slightly different tilt would be sufficient. This is shown in Figure 2. The minimum tilt is 0.100 degrees and the maximum is 0.129 degrees. Because of the finite angular subtense of the Sun as seen from Mars, the reflection from any point on the mirror system diverges by about ± 0.175 degrees or 0.349 degrees total. Since the angular subtense of Mars as seen from L2 is 0.326 degrees, the disk of illumination is slightly larger than Mars, causing an additional efficiency loss of approximately 11%. 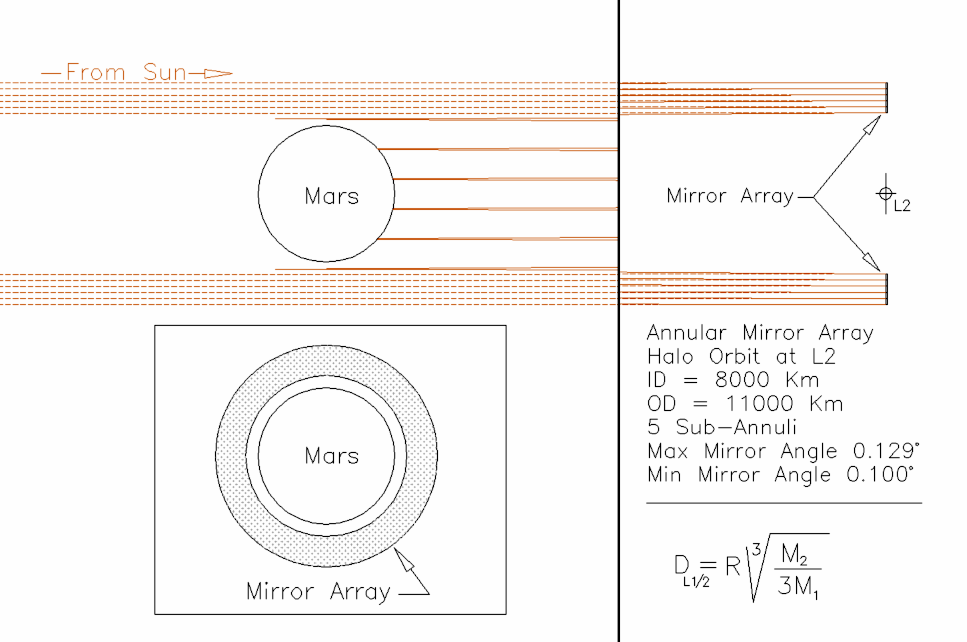 For such a large structure, it must be possible to start with a sparse array of mirrors, filling in the rest over time. Initially, there would be a few unconnected islands, all orbiting at the same radius from L2. With GPS satellites around Mars, each island could use station keeping to keep at the proper radius and keep from running into each other. As one ring becomes full, all the islands at that radius could be connected and a new sparse ring could begin, etc. The biggest risk (which I can't evaluate) is, due to the million km plus lever arm, the plane of the orbit needs to remain perpendicular to the Mars-L2 line to a few arc minutes so that all of the back side of Mars remains illuminated. Also, the station keeping required for a circular halo orbit would be significant, compared to almost none for a Lissajous orbit, but probably not prohibitively so. Maybe an orbital mechanics SME could comment on this.

Radiation pressure from the Sun will produce a small, but finite, outward push on the mirror system. Although this could be compensated by additional station keeping or a slight change in the distance of the mirror from Mars, it would be useful to calculate the magnitude of this effect. At Earth (at 1.0 AU), the pressure is 4.53E-6 newtons/square meter, or 4.61E-7 kilograms force/square meter (Ref. 4). At Mars (at 1.38 AU) the value decreases to 2.42E-7 kgf/m^2. This is for absorbed radiation. The value would be doubled for a perfect reflector. For a more realistic reflection of, say, 92%, the force would be 1.92 * 2.42E-7 kgf/m^2 = 4.65E-7 kgf/m^2. Lets assume for simplicity that the areal mass density of the mirror system is 1.0 kg/m^2.

Ref. 3: Tidal forces on an orbiting bar. https://en.wikipedia.org/wiki/Tidal_force or https://ocw.mit.edu/courses/earth-atmospheric-and-planetary-sciences/12-808-introduction-to-observational-physical-oceanography-fall-2004/lecture-notes/course_notes_15n.pdf

Strategically placed reflective material on Phobos on the tidally locked half facing mars. The mars moon appears one third compared to earths in the martian sky. If reflective, it would shine roughly ten times as bright as earths moon. Mars atmosphere is one hundredth thinner than earths. At that earths atmosphere cuts down on the affects of our moons reflective light benefits. On mars since the atmosphere is thinner the reflected light from phobos would be more substancial. There it would be next to permanent as can be and protected from space debris from the other half of Phobos.

Not the answer you're looking for? Browse other questions tagged mars orbital-mechanics terraforming three-body statite or ask your own question.

11
How to best think of the State Transition Matrix, and how to use it to find periodic Halo orbits?
4
Do Lagrange points still exist if there is significant radiation pressure on the third body from the first?

19
How deep is the force well of L4 and L5 Lagrangian Points of Earth-Sun set?
16
How feasible would it be to move a Kuiper Belt object (a good sized one) into an orbit around Mars?
5
Could a solar sail composed of smart glass stay near the L1 point of Venus?
2
Just how huge is Mars' cloud of hydrogen?
6
Balancing Perseverance Mars Rover; couldn't they just “move stuff around a little” rather than add 6+ kg of dead weight?
4
Why is L2 Langrangian point stable?
5
Terraforming Mars using a combination of aerogel and GM microbes?
14
Is there an intuitive reason for why the shape of the orbit at perigee is the mirror image of that at the apogee?