How did the Falcon 9's 1st stage return back to Cape Canaveral?

SpaceX's original plan was landing the 1st stage to a landing ship, that waits far away from the launch site, and it was like this: 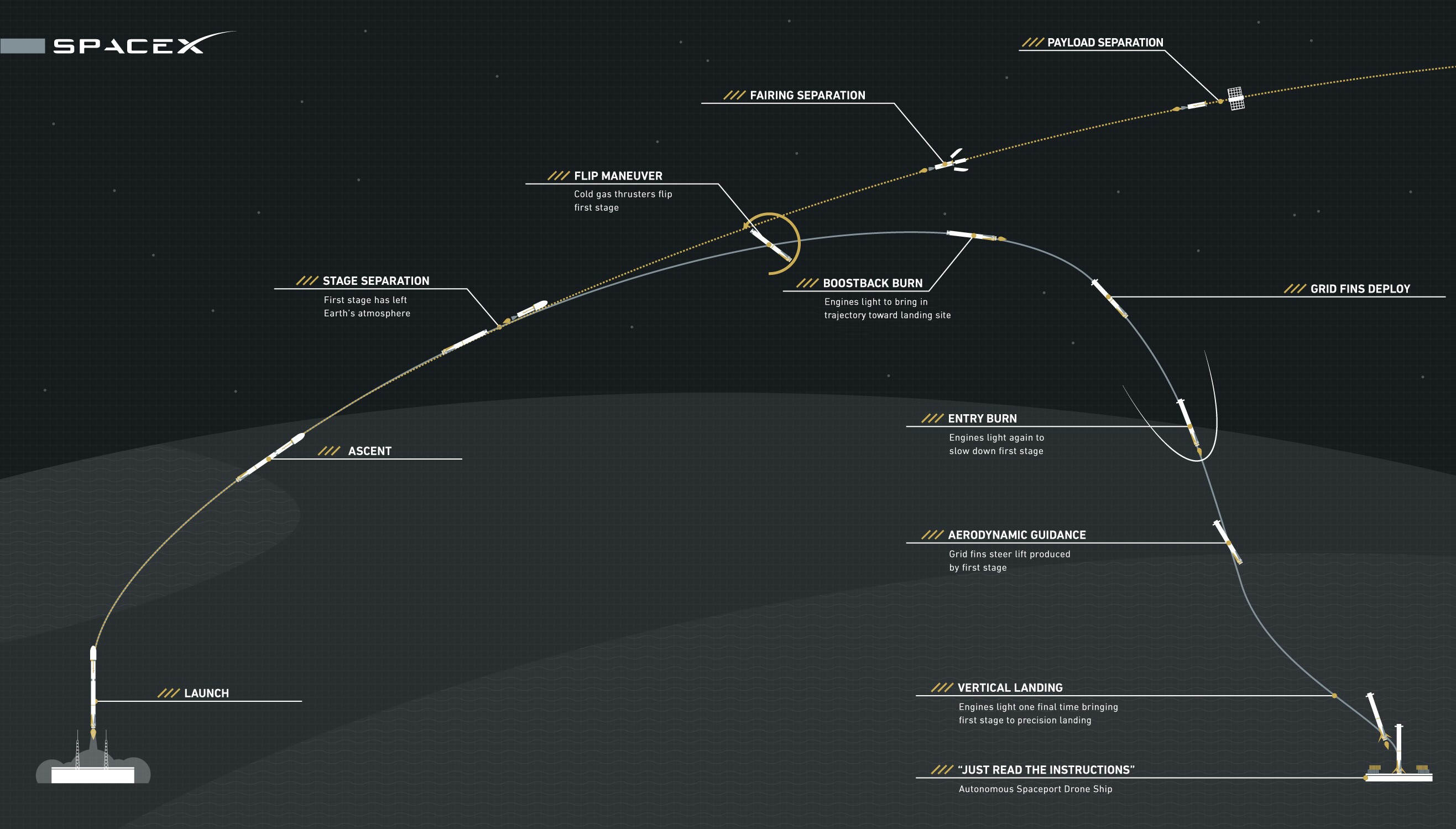 But tonight, the rocket's first stage landed at Cape Canaveral. Looking at this original plan slowing down and coming back to launch site seems not possible. So how did it made all the way back? Was it a different maneuver than landing on a ship.

The "return to launch site" flight profile flown on December 21, 2015, requires that the first stage re-light three of its engines after separation, turn around, cancel out all its speed, and accelerate back towards the launch site. To do this, it has to keep a lot of fuel in reserve after the separation -- less than you might think, though, because the first stage is quite light once the ascent fuel, second stage, and payload are gone.

In this launch, there were three significant factors that allowed them to do this:

For full-payload missions, the first stage will have to do more work to push towards orbit, so return-to-launch-site may not be possible, so I believe those missions will use the Florida-to-Atlantic-barge or Texas-to-Florida flight profiles, which require much less fuel in reserve after separation.

I think this is pretty self-explanatory: 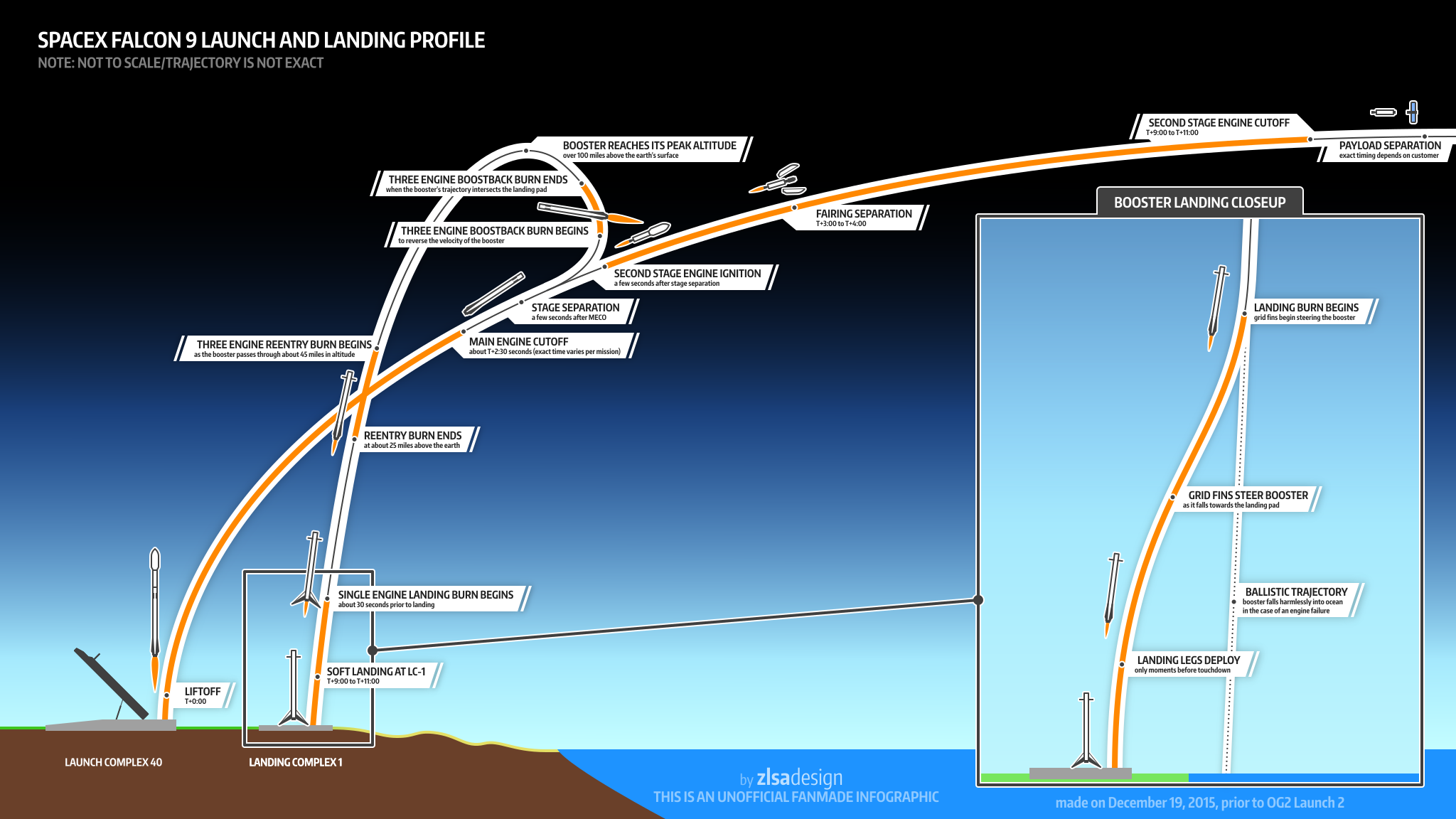 (Thanks to @TildalWave for finding an updated graphic)

It's important to note that the landing pad was a different site to the launch pad (6 miles away), so it didn't return *exactly* to its' original point of take-off, as can be seen here: 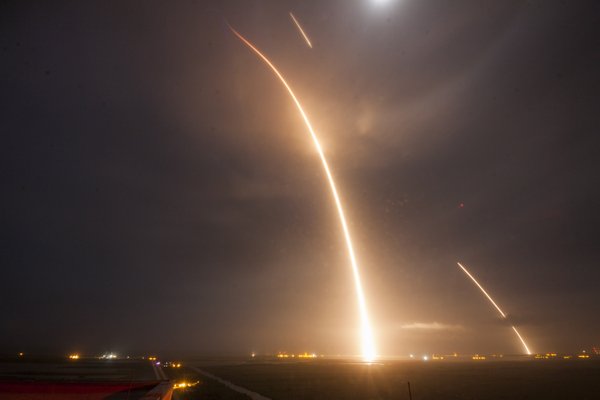 Not the answer you're looking for? Browse other questions tagged spacex falcon-9 reuse first-stage booster-flyback or ask your own question.

66
Why would SpaceX not use parachutes for the final descent of the first stage?
14
How is SpaceX going to land their Falcon first stage?
13
SpaceX rocket strange velocity

5
Are the SpaceX boosters slated to return to their launch site or somewhere downrange?
9
Is it possible the Falcon Heavy Demo flight could be done with three previously flown boosters?
10
How close did the landed first stage of the Falcon 9 get to the X on the landing pad?
8
Why did SpaceX use LC-13 as LZ-1?
7
Move landed rocket stage back to launch pad
6
Why were three engines used for the F9 1st stage landing burn (BulgariaSat-1)?
4
I don't understand the speed readings for stage 1 on CRS-12
4
Will SpaceX land the first stage for the TESS mission on land or a barge?
5
Why are these Falcon 9 1st stage bodies (apparently) wrapped in black plastic for transport?