Where is the other half (stage two) of the SpaceX Falcon 9 rocket?

The big news yesterday and today is that SpaceX had a successful launch, payload delivery, and landing of the Falcon 9 stage 1 rocket. My question is, where is the second stage of Falcon 9 now, and where will it ultimately end up? I read on Wikipedia that SpaceX would like to be able to land all stages of the spacecraft, but I'm having a hard time discovering what happened (or what will happen) to stage two of Falcon 9's flight 20? Is it supposed to land vertically as well, or parachute into the ocean at some point (or did it already)? Is it a big deal either way what happens to stage two after successful payload delivery?

Note to flaggers, this is not a dupe of this question, as I am asking what actually happened, not for all the different possibilities.

The second stage performed an engine relight test and re-entered over the Indian Ocean about an hour after launch. Below is the reentry region defined by a NOTAM (Notice to Airmen). 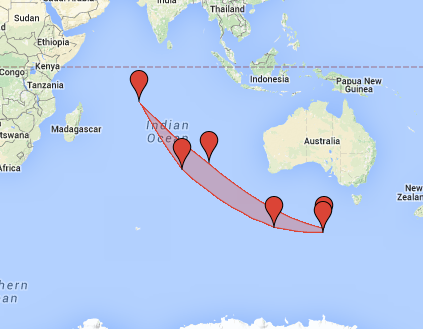 Relighting the second stage is an important step in launching satellites to geostationary orbit, so their successful test is promising.

The payload penalty to recover the second stage turned out to be more than they initially expected, and as such, SpaceX has given up on second stage recovery for the Falcon 9 booster.

The problem is, the first stage is only 160K up, Mach 5 or so which is very fast and high, but the second stage is basically orbital, which is much higher (maybe) and faster. Which means it needs to return all the way from orbit, which is much trickier. Need a heat shield, and more fuel/oxidizer to get back to the launch site (or really anywhere under control).

SpaceX has hinted that their next major booster (BFR/MCT not Falcon Heavy) will have second stage recovery, since that is meant to be their Mars booster, and they intend to recover the entire vehicle.

There is a really fun discussion of the math of second stage recovery on Reddit that is worth reading.

Not the answer you're looking for? Browse other questions tagged spacex falcon-9 upper-stage or ask your own question.

74
Difference between BlueOrigin and SpaceX rocket landings?
95
What happens to the Falcon 9 second stage after payload separation?
12
Is the location and time of a scheduled re-entry (e.g. Soyuz) announced in advance?

15
What is the value of the cross-track angle between the two designated CRS-4 first stage recovery zones?
10
Through what mechanisms would SpaceX test and examine the returned CRS-5 first stage?
8
Where will SpaceX take CRS-5 after it lands?
67
Why would SpaceX not use parachutes for the final descent of the first stage?
25
How does the Falcon 9 know where the landing barge/pad is?
4
Can Falcon 9 first stage landing final burn using one, two, and three engines? Tradeoffs?
4
Will SpaceX land the first stage for the TESS mission on land or a barge?
6
What are the challenges in recovering Falcon 9's second stage this way?
2
Puzzler; what can we learn about the distance and direction of Earth from this cool SpaceX-tweeted image of Earth and a vacuum nozzle?