What is the cause of Saturn's north pole persistent hexagon jet streams?

According to the article on the Cassini Solstice Mission website dating back to December 9, 2009:

The six-sided shape remains a mystery. Scientists think the hexagon is a meandering jet stream at 77 degrees north latitude, but they don't know what controls the path the stream takes. These images also show new phenomena for scientists to decipher, such as waves that can now be seen radiating from the corners of the hexagon where the jet takes its hardest turns. These images confirm the presence of a multi-walled structure in each of the hexagon's six sides, and the structure now can be seen extending to the top of Saturn's cloud layer.

And the article is equipped with links to the movie of the hexagon jet stream:

This movie from Cassini, made possible only as Saturn's north pole emerged from
winter darkness, shows new details of a jet stream that follows a hexagon-shaped
path and has long puzzled scientists. (Source: NASA JPL)

As the time passed, we now have more observational data and more photographs of this phenomena, than we had back in 2009. For example this photograph of Saturn's stormy north was published on August 5, 2013: 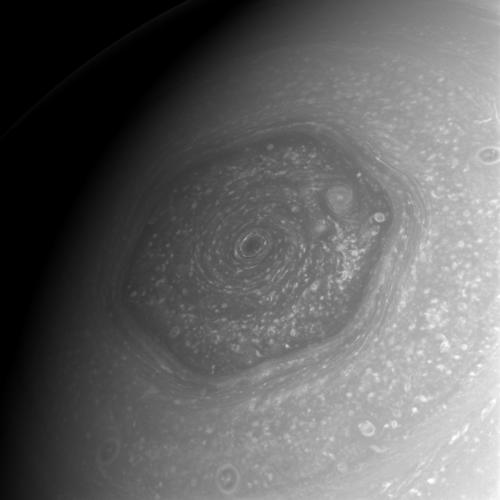 This view is centered on Saturn's north pole. North is up and rotated 33 degrees to the left. The image
was taken with the Cassini spacecraft wide-angle camera on June 14, 2013 using a spectral filter
sensitive to wavelengths of near-infrared light centered at 752 nanometers. (Source: NASA JPL)

Saturn's north polar hexagon appears to be a long-lived feature of the atmosphere, having been spotted in images of Saturn in the early 1980s, again in the 1990s, and then by the Cassini spacecraft in the past several years.

My question is, have we by now (since that article in 2009) been able to decipher the reason behind these mysterious hexagonal jet streams around Saturn's north pole, and what is it? Please back any possible theories with links to actual data and references.

After reading this blog post and skimming through this paper1, it seems like it's just the stabilization of a standing waves caused by the difference in angular velocity.

Basically, as you go outwards from the poles, there is an increase in the velocity as the system moves with a constant angular velocity.

This creates some shear on the gases present there, and there is a chance for local eddy currents. While in a stable situation one would have winds just spinning with the gases, in the real world situation there are instabilities which eventually coalesce into eddy currents. These can be of any number, however 6 seems to be one number which accepts a wide range of initial parameters.

The folks in the paper linked above tried to emulate the system by taking two concentric rings and spinning them at different frequencies2. When a dyed liquid placed on top of it is disturbed, one can get polygonal patterns of varying number of size: 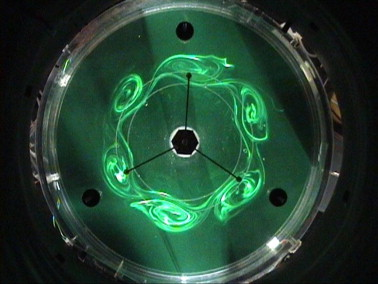 While Saturn has a much more complex atmosphere, this same principle may apply here to give a hexagonal structure around which the rest of the wind currents organize.

Not the answer you're looking for? Browse other questions tagged planetary-science weather saturn or ask your own question.