2nd stage speed - with respect to what? (SpaceX webcast of Orbcomm OG2 deployment)

As a follow-up question to this answer by @TildalWave, exactly what frame is used to calculate the "speed" in the inset display of speed and altitude in the SpaceX broadcast of the Falcon 9 launch and Orbcomm-2 deployment. Since it starts at zero before launch, is it the ground speed of the orbit projected on the Earth's surface, or something else?

I'm trying a simple physics exercise to convert speed to velocity under some assumptions (fixed inclination, radial velocity from $\Delta altitude/\Delta t$) and then integrate it to try to reconstruct the orbit for fun. I know there are other ways, but this is what I want to try.

For example, as a rough test of the numbers (in Python):

Adding the "speed" from the screen shot to the "speed" of Florida (to get a speed closer to something in an inertial frame) gives 96 minutes - close to the 97.4 minute period of the Orbcomm-2 satellites currently. You can use this link and click on any of the Norad IDs between 41179U through 41189U.

This is just very rough back of the envelope (for example, inclination is 47 degrees), but it suggests that the speed is in the rotating frame of the Earth. Imagine a giant x, y, z axes draw from the Earth and rotating with it.

Is this actually what it means? 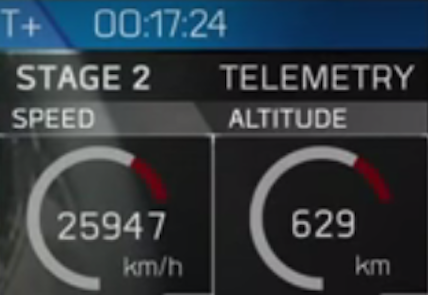 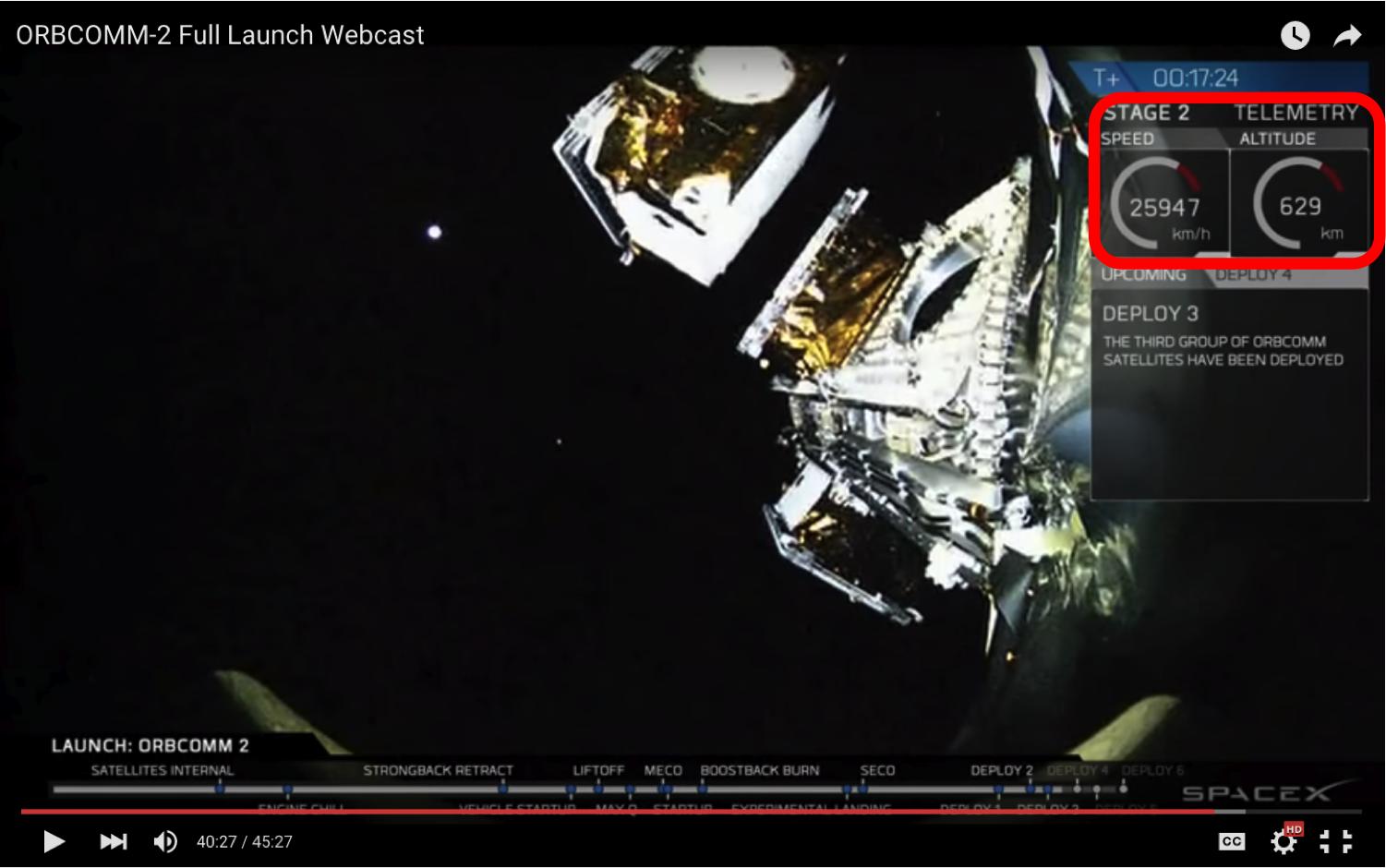 On-screen telemetry readings caused a bit of confusion in our chat as we were observing the launch, too:

So we started calculating what the speeds for target semi-major axis of 625 km (639 x 611 km / 2) and then current altitude of 622 km for circular orbits should be. Using $v_o \approx \sqrt{\mu/a}$, that came out at 27,157 and 27,163 km/h, respectively. And for the 629 km altitude that your screen is showing, that comes out at 27,149.35 km/h, but telemetry shows 25,947 km/h and slowly dropping, while the altitude was slowly climbing. Something isn't quite right, and this can't have been readings for inertial frame of reference. If the upper stage was 1,202.35 km/h or 4.4% short of its orbital speed, it would start reducing its altitude and increasing speed as it falls in a wide arc towards the Earth. Yet we saw the opposite;

So I started plugging some more values into the formula, suspecting the values given were for rotating frame of reference (i.e. downrange speed), which would make sense since the launch vehicle started at 0 speed and not the Earth's eastward rotation at 28.562106° N for SLC-40 latitude and accounting for Earth's flattening:

Which comes out at 1,465.65 km/h. Subtracting this value from previous results, as the launch site is rotating towards the upper stage, I get 25,683 km/h for a circular orbit at 629 km altitude. That's better! Now my calculations are off only by 264 km/h, which can be attributed to small difference in stage's azimuth with respect to the launch site during deployment, and explains why the upper stage is still slowly climbing without propulsion while telemetry readings show its speed to be slowly dropping. I.e. that is still has some excess orbital energy from the impulse burns and it will take a bit of time for it to climb the orbit, while the Orbcomm OG-2 satellites will have to remove that much speed to later circularize their final orbit.

So, while I don't have any official sources for this, it does appear that the telemetry readings were downrange speed, given in a rotating frame of reference. And the next best thing to official sources of information, here's the simulated upper stage graphs of the SpaceX Orbcomm OG-2 launch profile, made by FlightClub.io: 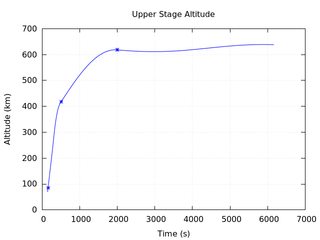 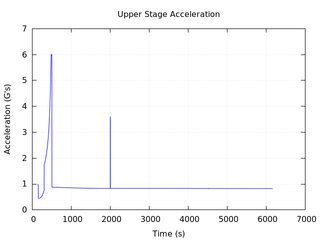 Target orbit there is described as:

Not the answer you're looking for? Browse other questions tagged orbital-mechanics launch falcon-9 low-earth-orbit orbcomm-2 or ask your own question.

13
Does SpaceX put Falcon 9 2nd stages carrying geostationary satellites into a temporary sub-orbital trajectory before the second burn?
17
What was the distant bright light in the SpaceX webcast of Orbcomm OG2 deployment?
8
How to get earth-centered, earth-fixed coordinates from Skyfield?
6
Why is the Orbital Velocity after SECO of Crew Dragon with 27K km/h lower than of ISS?
3
Are westward launches more expensive than eastward launches?

17
What was the distant bright light in the SpaceX webcast of Orbcomm OG2 deployment?
5
A nicer way to download the positions of the Orbcomm-2 satellites
2
DId the Falcon 2nd stage turn around [UPDATED] and point "backwards" before the Orbcomm-2 deployement started?
5
When SpaceX hot fired the previously used ORBCOMM OG2 first stage, why did they suddenly switch from LC-39A to LC-40?
5
Are these objects other satellites in the SpaceX webcast of Jason-3 deployment?
9
Why rotate the Falcon 9 2nd stage after deployment?
2
Why does this site show Starman's position so far from what Horizons gives?
15
Has SpaceX ever done a hot restart of a 2nd stage?