Why not build rockets out of composite materials?

Considering how important mass ratio is for the rocket equation, why are rockets built still out of aluminium, and not some lighter material, perhaps carbon/glass fiber composites?

I'm aware composites are used here and there for some parts of rockets, but the heaviest part — main structures and tanks all use aluminium as far as I can see. (Also, the payload fairings seem like a good candidate for composites, and I know Atlas V 500 series use a fairing that's composite on the outside, but the main structure is still Al)

Wouldn't it be useful to switch to composites? Are there big downsides that make it a no-no, or is it just that it's hard to develop this technology and metal is simpler?

They certainly have their place - eg. in interior of manned spacecraft, infrastructure surrounding the launch, prototyping - but currently their characteristics in environments that the craft must withstand during launch and in orbit aren't quite satisfactory.

Sometimes though, their shortcomings are simply accepted, e.g. the Shuttle liquid fuel tank, built from a composite of quite thin aluminiu and two kinds of foams, would arrive in space badly scorched in several places, and definitely in a worse condition than before the launch - but still good enough to keep the remainder of the fuel until it's depleted.

Edit: added more information on why composites aren't common yet.

Most of a rocket's structure consists of LOX and fuel tanks. Historically, carbon composites were viewed as too flammable to be used safely for tanks. Carbon composites failed standard tests used by e.g. NASA to determine flammability. In 2001, a study was done to re-examine this decision.

To be considered LO2 compatible, materials must be selected that will resist any type of detrimental, combustible reaction when exposed to usage environments. This is traditionally evaluated using a standard set of tests. However, materials that do not pass the standard tests can be shown to be safe for a particular application. This paper documents the approach and results of a joint NASA/Lockheed Martin program to select and verify LO2 compatible composite materials for liquid oxygen fuel tanks.

(the program was VentureStar, by the way)

And there are other issues: at LOX temperatures, carbon composites can do strange things, including igniting spontaneously when something impacts the tank. Preventing that was a matter of finding the right materials:

Tom DeLay, a researcher in the area of nonmetallic materials and processes at NASA's Marshall Space Center (Huntsville, Ala.), notes that the many composite cryogenic tank development programs initiated over the years have certainly resulted in technology improvements, yet most had budgetary and schedule constraints that did not permit researchers to identify or qualify the optimum materials for cryogenic environments.

Another roadblock in the use of composites is the need for giant autoclaves if you want to build large structures out of a composite (e.g. the SLS tanks).

"Manufacturing, especially for composites, is limited by available facility size, and the more complicated the design, the greater the cost and difficulty of manufacturing,” states the new NASA document, which was released May 11. “So concepts that are enabled by non-autoclave processing of composites and with integrated or low-cost tooling are of great importance.”

Developing a new rocket is a long and expensive process. The lack of price pressure meant companies could afford to keep using existing designs instead of having to develop new, cheaper rockets. The rocket market is far less cutthroat than the aviation market, and far smaller (so your expensive development has to be paid for by fewer sales).

With the arrival of several commercial ventures, that is changing. These days, composites are being considered by NASA, ESA and JAXA for interstage structures, cryogenic fuel tanks and other rocket parts.

SpaceX already uses carbon fiber composites for the payload fairing and interstage on the Falcon 9. Here's the interstage: 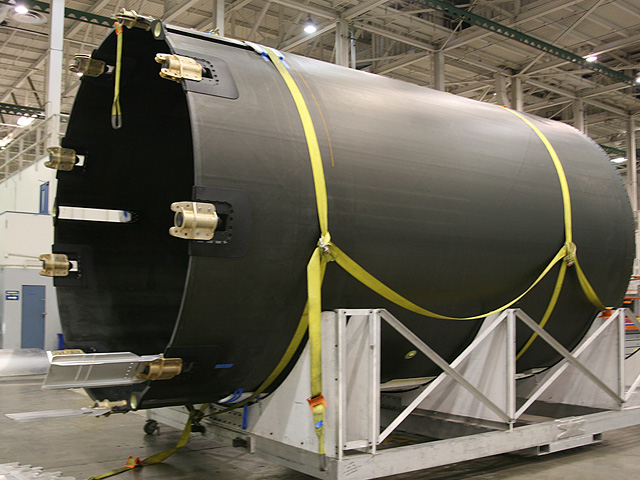 From the Falcon 9 user guide:

The Falcon vehicles’ interstage, which connects the first and second stages, is a composite structure consisting of an aluminum honeycomb core surrounded by carbon fiber face sheet plies. The interstage is fixed to the forward end of the first-stage tank.

ULA uses the same combination for their Atlas V fairing. The Atlas SRBs use a carbon-fiber casing.

This is a Falcon 9 fairing after landing: 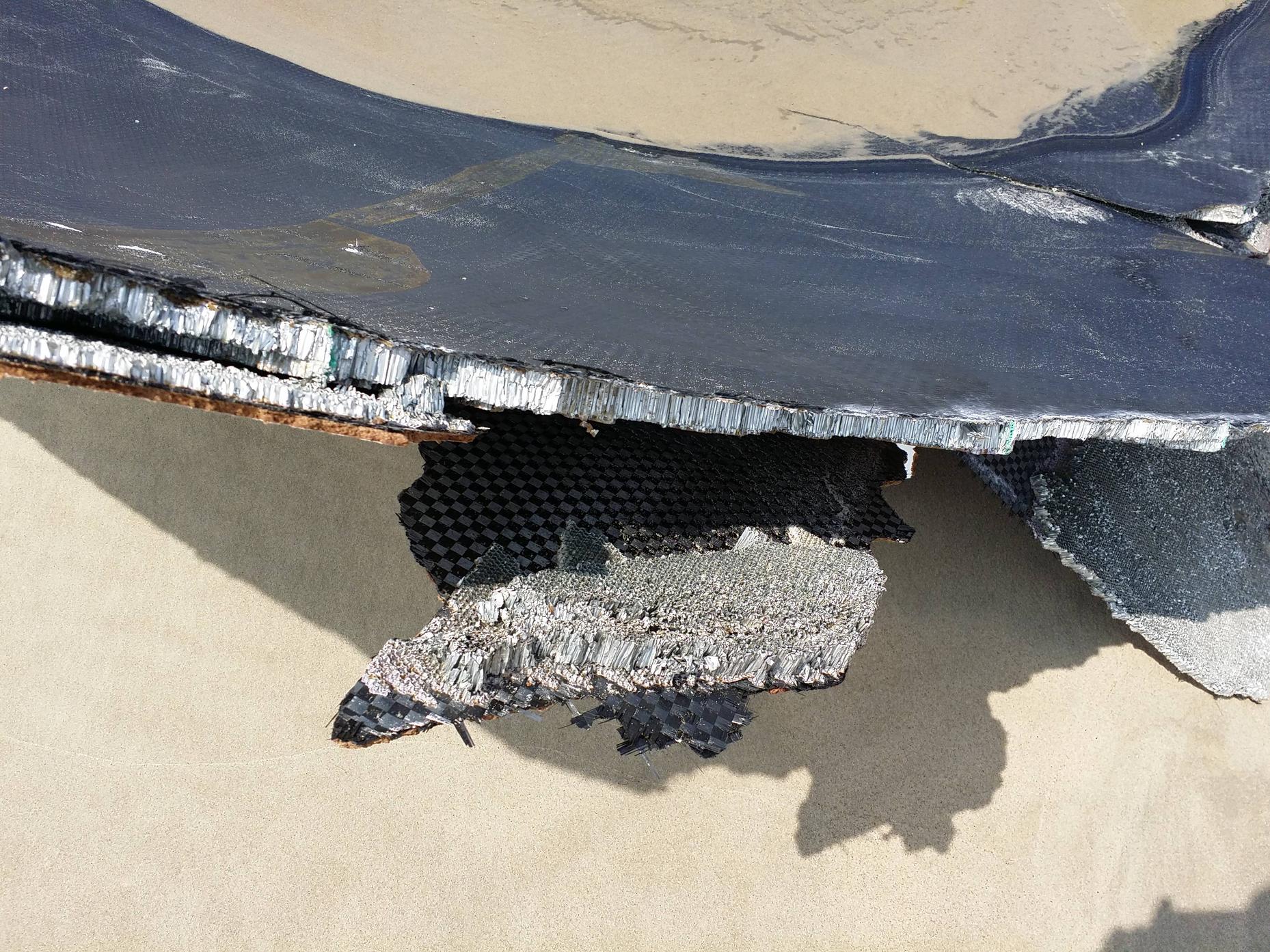 Parts of newer launchers have been made out of composites. For example the Vega first stage (P80) uses composites for the casing and some nozzle parts:

However, instead of the steel outer structure used for the Ariane boosters, the P80 has a lightweight, filament-wound composite casing. It also incorporates a new, simplified design of igniter with a carbon fibre structure.

A new, steerable nozzle fabricated from composite material has been developed, with a simplified architecture made up of fewer elements, to reduce production costs. It also includes complex-formed cast metal parts and a new thermal insulation material.

ELV are aiming to develop a larger first stage, the P120, to upgrade Vega. These are also expected to be used as the Ariane 6 boosters.

As to why these materials aren't used more already, remember that the technology is relatively new (at least for use in such demanding applications as rocketry, as described in SF's answer) and the launcher industry is fairly conservative and evolves slowly.

Composites work fine in space, and for cryogenic fuels. There was some trouble with the X-33's liquid hydrogen tanks which is why people say they "don't work at cold temperatures" but those problems have long been resolved.

Making them radiation resistant is a matter of selecting the right resin, and resins that hold up in space are available. Of course, rockets only operate in space for a few days at most, so this wouldn't be a factor in any case.

Composites are used extensively in modern satellites to store propellents, among other things.

The reason they aren't used in rockets is simple: even the newest rockets (like the Falcon 9) were designed before composites were proven to be able to hold cryogenic propellents. Switching to a new material for the fuel tanks of the rocket would require them to re-qualify the rocket, which takes years and is very expensive. You can expect rockets to begin using these materials for fuel tanks as new rockets are developed in the coming years and decades.

Rocket Lab's Electron launch vehicle is (as far as I know) constructed almost completely from carbon composite including the fuel tanks. I hear there have been issues with carbon composites being suitable for holding liquid propellants but if this company is confident enough to produce a vehicle entirely of the stuff then I'm sure they've done their homework.

Not the answer you're looking for? Browse other questions tagged rockets materials composite-materials or ask your own question.

21
Could a spacecraft be made out of lunar materials?
13
Does Mars contain materials that could be used to build a space colony?
19
What materials are the windows on the US Segment of the ISS made out of?
14
Why has SpaceX changed Starship from carbon fiber composite to stainless steel?
2
Which build materials for a long-term crewed space vehicle? (no launch)