What are these enclosed regions on the Mission Control Center map?

Whilst watching NASA TV over the years, I've often seen the map on the wall of Mission Control: 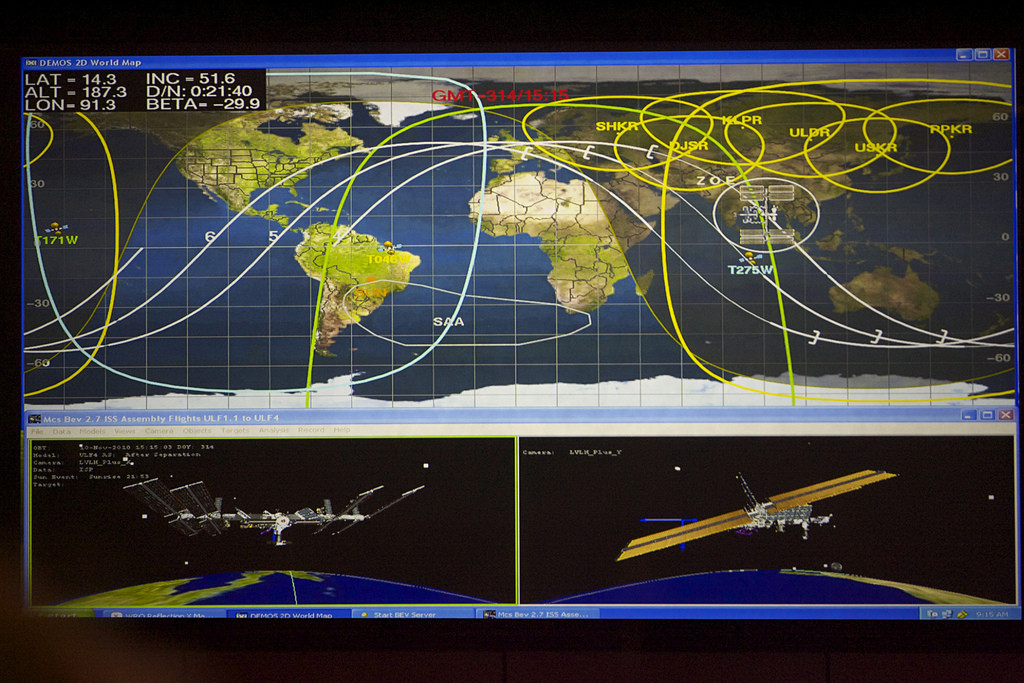 "Main Screen in the ISS Mission Control Center", by AGeekMom, CC BY 2.0

In this image, as well as the orbital track of the ISS, we see a number of other regions:

What exactly do these represent?

* Coverage areas of each of the three TDRSS satellites (also shown color-coded on the map) are bigger than half the Earth's surface on the map because of adjustment to ISS orbital altitude. So the light blue line enclosing is the no cover zone that's antipodal to T275W that is shown just South of Sri Lanka and below the ISS on the image. I realize that this might look odd on a equirectangular projection map, but in a sense both sides of these lines are circles on a globe of the Earth. The bigger area side is inclusion area where communications are possible with that satellite before the station sets behind the Earth from satellites vantage point, the smaller one (I guess it could be deemed the enclosed one on the projection) is the exclusion zone where coverage has to be provided by the other two TDRSS satellites spread roughly 120° around the globe in a small inclination geosynchronous orbit, or ground based stations where available and in direct line of sight with the station.

Not the answer you're looking for? Browse other questions tagged iss nasa tracking mission-control or ask your own question.

13
What happens differently when ISS is inside this red boundary (Russia & Europe & ...)?
16
Which type of map projection is most commonly used in control rooms?
5
Besides the (currently down) HDEV, are there other public live video feeds from the ISS?