What kind of launch escape system (LES) does Dream Chaser have?

What kind of launch escape system will be aboard Dream Chaser?

Since Dream Chaser is based on the HL-20 lifting body design, I presume it would have same or similar Launch Escape System (LES). What follows are to the question the most relevant excerpts from the Launch Pad Abort of the HL-20 Lifting Body journal article (including diagrams).

The capability of the HL-20 lifting-body spacecraft to perform an abort maneuver from the launch pad to a horizontal landing was studied. This study involved both piloted and batch simulation models of the vehicle. A point-mass model of the vehicle was used for trajectory optimization studies. The piloted simulation was performed in a fixed-base simulator. A candidate maneuver was developed and refined for the worst-case launch-pad-to- landing-site geometry using an iterative procedure of off-line maneuver analysis followed by piloted evaluations and heuristic improvements to the candidate maneuver. The resulting maneuver demonstrates the launch site abort capability of the HL-20 and dictates requirements for nominal abort motor performance. The sensitivity of the maneuver to variations in several design parameters was documented. Introduction T 20,000-lb lifting body with a maximum subsonic lift-to-drag ratio of 4.3 (see Fig. 1) capable of being launched vertically into low Earth orbit with a crew of two and up to eight passengers using an expendable launch vehicle and of being landed horizontally following re-entry. Both manual and automatic landing capabilities are planned. 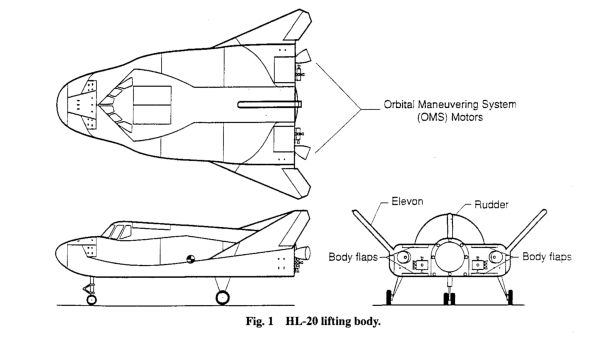 A 6700-1b adapter module will be used to connect the HL-20 to the launch vehicle. (See fig. 2.) This adapter design will include a launch escape system that is intended to thrust the HL-20 away from the booster in case of a malfunction either during the actual launch or on the pad prior to launch (on-pad abort). Acceleration levels on tile order of 8g's (lg = 32.2 ft/sec 2) would be required to propel the vehicle a safe distance away from a malfunctioning booster. After a specified time, the abort-motor thrust would drop to approximately lg for an additional specified amount of time to avoid excessive velocities and associated drag. The adapter module would be jettisoned following abort-motor burnout. 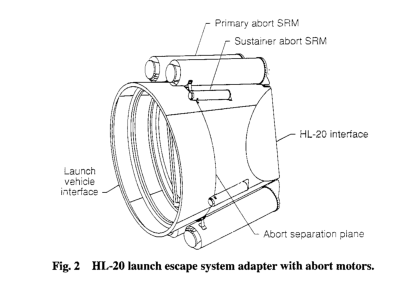 The capabilities of the HL-20 to successfully abort during the ascent phase of a launch have been treated in a separate study by Naftel and Taley; the on-pad-abort maneuver, performed in an emergency prior to ignition, is the subject of this paper. Since the initial lift-to-drag ratio precluded a glide to a nearby runway, original launch pad abort scenarios were similar to those used for earlier manned capsules, i.e., an abort to an ocean landing using a recovery parachute. Additional aerodynamic refinements of the HL-20 configuration led to increased subsonic lift-to-drag ratios and a higher performance launch escape system abort motor was specified.

Full text is available in the journal article: Launch-pad abort capabilities of the HL-20 lifting body

While Dream Chaser is, indeed, based on HL-20, one of the few significant changes was removing the launch abort adapter and replacing it with an integrated abort system. This was made possible by using a pair of liquid bipropellant engines (though originally the plan was to use hybrid motors) as the spacecraft's main propulsion system. The same engines could therefore be used for both orbital adjustments and aborts.