In Kerbal Space Program, most liquid fueled engines include a generator which provides electricity to systems on the rocket, keeping the batteries topped up while on ascent.

Do any real rockets (contemporary or historic) use such a system? I would imagine it's easier to just size the batteries or fuel cells appropriately for the duration of the launch and avoid the complexity of putting a generator on the turbopumps.

A quick search didn't turn up any alternators on rocket engines.
I did find a list that showed the power source on a few rockets. Nothing complete, but it shows that e.g. the Ariane 5 has one power source (batteries) in the VEB, which is attached to the second stage. The entire rocket is controlled and powered from here.

This brings us to two problems an alternator would have:

It should be possible to run an alternator off the turbopump. On aircraft, the auxiliary power unit is usually a small turbine with an alternator. But from the above you can see you'd be adding a lot of complexity for little weight gain.

Apparently flux switching alternators are used on some guided missiles (e.g. AIM-7 Sparrow), which may have to push a lot of power through a radar antenna during their short flight.

Another concept for a rocket engine alternator is the bi-modal NTR. It is a conventional NTR used for the high thrust manoeuvres, but when coasting the reactor is used for electricity production. The electricity produced can either be used for on-board systems, cryogenic refrigeration, or it can be used to power an ion engine. 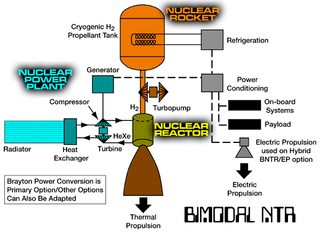 Not the answer you're looking for? Browse other questions tagged rockets power liquid-fuel kerbal-space-program or ask your own question.