Can Venus be made habitable?

Atmosphere of Venus consists predominately of Carbon dioxide and Nitrogen. Is it possible to convert the atmospheric Carbon dioxide into Oxygen with the help of bacteria by photosynthesis, and make the planet habitable also for humans, on top of other organisms that would be required to terraform it?

To some extent, we can answer the question for the tools currently available to life, using basic physical principles, and the answer to that is "no". This needs consideration of the atmosphere of Venus and the nature of photosynthesis. The goal of terraforming would primarily be to sequester (or "lock away") the extra atmosphere. So we mainly need to take the CO$_2$ and put it in compound. Photosynthesis does this in principle but the reaction could not trivially be complete on Venus.

Photosynthesizing organisms on Earth basically operate in an open system. Lots of reactions are involved, but you can "bound" the process to only look at what goes in and what goes out. In the following notation, D is an electron donor, which is basically oxygen as far as we're concerned. 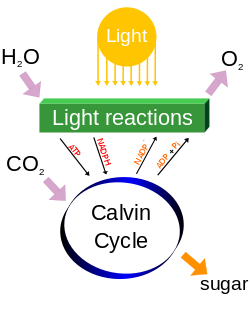 Ideally, we would like an environment where all the reactants are abundant, and where there's also a diverse environment of other elements that contains the intermediary species. For instance, on Earth we like to use so-called "NPK" fertilizer, which stands for nitrogen, phosphorus, and potassium.

Now let's look at how well the Venus environment fits that. We will have to limit this to the upper atmosphere, because the surface is too hot for any life as we know it. There are other concerns, like how much light it gets and other toxic species that would be less present in the upper atmosphere. But Earth has some floating organisms itself (although not photosynthesizing).

Here is the actual composition of the Venus atmosphere.

The nitrogen might not actually need to be removed. Here is my calculation of the N$_2$ mass:

In comparison, the mass of Earth's atmosphere is $ 5 \times 10^{18} kg$ with about 2/3rd nitrogen. It's thinkable that something could live on a planet with 10x as much nitrogen. Anyway, the primary concern is CO$_2$, which is the reason the surface is at huge pressure and temperature.

The next question is: can't we just do photosynthesis and recycle the water? The real reason you can't do this is the nature of the sugars, which generally have a formula like C$_x$H$_2$$_x$O$_x$. This is the form that photosynthesis gives us to lock away the extra carbon. But there's a problem here - it's not just carbon. It also has oxygen, and more problematically hydrogen. You will run out of hydrogen if you store the product as sugar. Plants stop being helpful here. You can't engineer a plant to produce pure carbon structures!

The real process you would want is something that uses photons to turn CO$_2$ into a solid structure, with only a small amount of oxygen gas produced as a byproduct and no water. How? You could use plants as a part of the process in a closed ecosystem floating in the Venus open atmosphere. But then you would have to refine the plant products to an extraordinary purity so that you won't run out of hydrogen. But whatever system you use would have to also be floating and self-replicating due to the sheer scale. That's where the discussion gets crazy.

The problem is much more space-age than simply engineering some algae and dropping it into the atmosphere (there's no water). Your options are limited to:

None of these are ideas that we can even intelligently speculate about at the present moment in time.

You could use various techniques to convert/fix all the harmful substances in Venus' atmosphere, but photosynthesis is not likely to be one of them.

This is because Venus has an incredibly opaque atmosphere, so all you would be able to photosynthesise (assuming you had bacteria resistant to the acidic sulphur compounds found n the atmosphere) would be the top layer.

In any case, the technology we have now or for the foreseeable future just won't let us do this at a rate which will terraform Venus in time for humans to still be human.

Kim Stanly Robinson had a few throwaway lines about the people trying to do so in his Mars trilogy; however it was with technology well advanced beyond our own. At this point in the series Mars was well on the way to being terraformed with swarms of von Neumann (autonomous self replicating) robots available to do the mass industrial steps.

The initial stages of the plan were to deploy a sunshade large enough to fully block out all the sunlight from reaching the planet (originally this was the mirror array used to increase lightfall on Mars; the Venus project grew out of the question of what to do with the mirrors after the Martians voted to remove them). Decades later, after the atmosphere cooled enough that all the CO2 was liquified/frozen the plan was to seal off the tops of the CO2 seas with sheets of artificial diamond.

A normal day/night cycle would then be provided by wrapping the planet in superconducting cables to spin it up like the solar systems largest electric motor and then adjusting the sunshade to allow an Earth normal amount of light to reach the planet.

If there was insufficient water in the residual atmosphere the Kuiper belt would've been mined for comets similar to how the Martian hydrosphere was expanded.

Photosynthesis won't work, as AlanSE has explained. A better option would be figuring out how to extract the carbon from the CO2 to make the carbon nanontubes that we're going to need to build the space elevators.

I have a several better alternatives. Deep injection of CO2 which would reform it into solid rock compounds could be done planet wide. Mineralization of CO2 seems quite possible, depending most on the presence of hydrogen in the crust of the planet which is an unknown factor, but could very well be similar to earth. 4.8x10^20kg is a LOT of co2 though. So even if we stored 1 million metric tons of it per year per injection (which is doable with today's technology on earth) per well, and stored it using a million injection wells, it would still take 500 million years to terraform the planet. That is a LOT of CO2.

Another alternative would be combining CO2 nucleotides into Mg, Si, S (using fusion) and relying on oxidation of those compounds (SIO2, Silicon disulfide), through combining CO and O2. The issue is one of efficiently performing the transmutation. Also one could try coherent photonuclear isotope transmutation thus performing mass conversion of O => N and C => B. Though you still have to deal with the Nitrogen (by changing it into boron nitride, a stable solid compound). Unfortunately that also faces the same problem of scale, requiring hundreds of millions of particle accelerators, though you might be able to cause the planet to rotate if you faced them all in the same direction and ran them for untold years. Now if you could miniaturize those and make them efficient and mass produce them and find a way to power them you might be getting somewhere.

Not the answer you're looking for? Browse other questions tagged terraforming venus or ask your own question.

2
Venus Exploration
2
Terraforming of Venus
2
How would we move Venus or Mars into Earth's orbital zone?
20
Would terraforming Venus destroy its ionosphere?
3
Fixing Carbon in Venus's Atmosphere

20
Would terraforming Venus destroy its ionosphere?
3
Fixing Carbon in Venus's Atmosphere
24
How does Venus' thick atmosphere survive against the solar wind?
4
How to produce oxygen out of Venusian atmosphere's carbon dioxide?
6
Could the Moon be terraformed by outgassing its oxygen?
15
Could we see the surface of Venus after the explosion of a H-bomb in its atmosphere?
14
Why not bring life to Venus along with the next exploring mission?
18
What if a Space Shuttle entered the atmosphere of Venus?