Do any realistic rocket systems use different substances for propellant and fuel?

In his Edge.org Annual Question response, Progress in Rocketry, George Dyson exults in the success of Blue Origin and SpaceX in landing their rockets after pushing them past the Kármán line, and then goes on to predict that this will help pave the way to rockets with separate substances as propellant and as fuel:

There is no reason the source of reaction mass (propellant) has to be the same as the source of energy (fuel). Burning a near-explosive mix of chemicals makes the process inherently dangerous and places a hard limit on specific impulse (ISP), a measure of how much acceleration can be derived from a given amount of propellant/fuel.

All the advances in autonomous control, combustion engineering, and computational fluid dynamics that allowed these two rockets to make a controlled descent, after only a handful of attempts, are exactly what will be needed to develop a new generation of launch vehicles that leave chemical combustion behind to ascend on a pulsed energy beam.

Leaving aside whether, and to what extent, the Blue Origin and SpaceX results get us in that direction, are rockets like that even contemplated as a realistic possibility in the accessible future? Kerbal beamed power aside, is there any way for a rocket to climb from the surface to Earth orbit without physically carrying the source of energy that will get it there? Or what is Dyson talking about?

To beam the power to the rocket, especially when needing high acceleration, is not what I will expect to show up in the near future. However, separating the energy source from the propellant is the idea behind the nuclear thermal rocket. Here, energy comes from a reactor, and you can choose more freely in higher performing propellants. Because a NTR is limited by the temperature at which the reactor starts to melt, you want an exhaust-gas with low molecular mass, most commonly hydrogen. Working prototypes are built. A separate energy source is also the idea behind an ion thruster, where high efficiency is achieved by accelerating the propellant (often xenon) using electrical energy. That is the technology used by the ongoing Dawn mission. 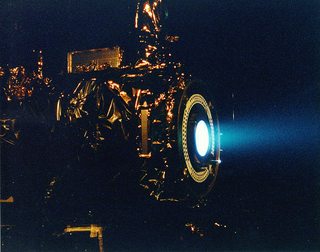 But this is also actually a possibility with chemical rockets. In his book !Ignition, John D. Clarke tells the story about how mercury was seriously considered as a part of the fuel in order increase the density impulse of a missile, trading ISP for delta-v. That is achieved because you can then fit more propellant into the same tanks. Delta-v is then calculated by:

where $m_0$ is the dry mass of the rocket, $V$ is tank volume, $\rho$ is propellant density and $v_e$ is exhaust velocity.

As for a solar sail, it carries neither the energy source nor any propellant. Note that you can also point a laser on the sail to increase the thrust.

Heating propellant with an external laser may also be a feasible concept, because you can then have the same efficiency as a NTR, but not having to carry a heavy reactor around. Several concept for this can be found here. The temperature of the exhaust gas is also then no longer limited the melting point of the fuel elements in a nuclear reactor.

A chemical rocket is actually just a special case, where the fuel and the propellant happens to be the the same thing. In a jet engine, for example, the fuel brought along is half the energy source, and the oxidizer is collected from the air. The air passing through the engine is also the propellant used.

Kevin Parkin has been the lead researcher into Microwave Thermal Thrusters, which was his PhD thesis at CalTech. He continues to work on the technology. From an interview with NextBigFuture:

We are scheduled to take delivery of the gyrotron in April 2012. We hope to have a subscale demonstration by 2018, and to prove suborbital capability within a decade. Within two decades, we should have true orbital, single-stage-to-orbit capacity. Of course, if we had higher funding, we could reduce those timeframes substantially.

The gyrotrons produce the microwaves that hit a heat exchanger on the rocket, which heats liquid hydrogen, which propels the rocket. It's been a while since I looked at his paper, but if I recall correctly, the heat exchanger is the biggest problem. It has to withstand very high temperatures and efficiently pass heat to the propellant. 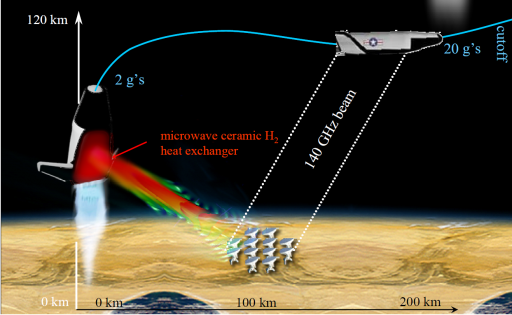 Parkin was for a time Deputy Director of Ames Research Center, so he is highly regarded in the field. In 2012, the Millimeter-Wave Thermal Launch System program at Ames was created jointly by NASA and DARPA, based on Parkin's work.

Short Answer: Yes, there is an existing rocket that has separate fuel and reaction mass. As already mentioned, the NASA DAWN spacecraft uses solar photons as fuel and xenon gas as reaction mass.

Long Answer: Almost all rocket engines have separate fuel and reaction mass. Chemical rockets like those used by NASA, SpaceX, and Roscosmos are the rare exception.

It takes energy to throw the reaction mass out the nozzle at high velocity. This is obtained from the rocket's fuel.

4
Is it correct to say that a LH2/LOX rocket uses water as propellant?
5
chemical propulsion with separate fuel and propellant?
8
Why has beam-powered propulsion not seen more use?

7
Why not plug it into the wall?
17
Why design new rocket engines instead of using the existing types?
2
Usages of electric propulsion versus chemical engines
5
chemical propulsion with separate fuel and propellant?
4
Could a "nuclear turbo-jet" be built?
5
What was the influence of the military in the decision to use kerosene as fuel for LOX?
3
Can the cryogenic expansion of liquid oxygen and liquid hydrogen be used to pump a rocket engine?