DId the Falcon 2nd stage turn around [UPDATED] and point "backwards" before the Orbcomm-2 deployement started?

It looks to me like the camera used for the deployment part of the Webcast shown on YouTube is located near the "bottom" of the payload area (closer to the engine & tanks) - in which case, did the spacecraft rotate so that it was pointing roughly "backwards" by the time deployment started?

The graphics and explanations in this question and answer pair are excellent, so I'll just link to them.

EDIT: It maybe be helpful to look at this GIF here which is too large to upload to SE, and I'm adding another captured image below.

There is something sticking up at either side of the bottom of the image - possibly a boom for the camera and floodlights? It sticking out farther from the axis than the satellites. It seems it would be easier if these were deployed from the bottom of the payload area, not the top (but anything is possible). Also looking at the top of the image there is no hint of the engine or spacecraft structure. It "looks like" the top of the structure which holds the satellites. (moon still there at the top).

SpaceX second stage after all Orbcomm-2 satellites deployed Location ~ roughly Europe, where moon is setting in the West. Direction of motion is (roughly speaking) East. 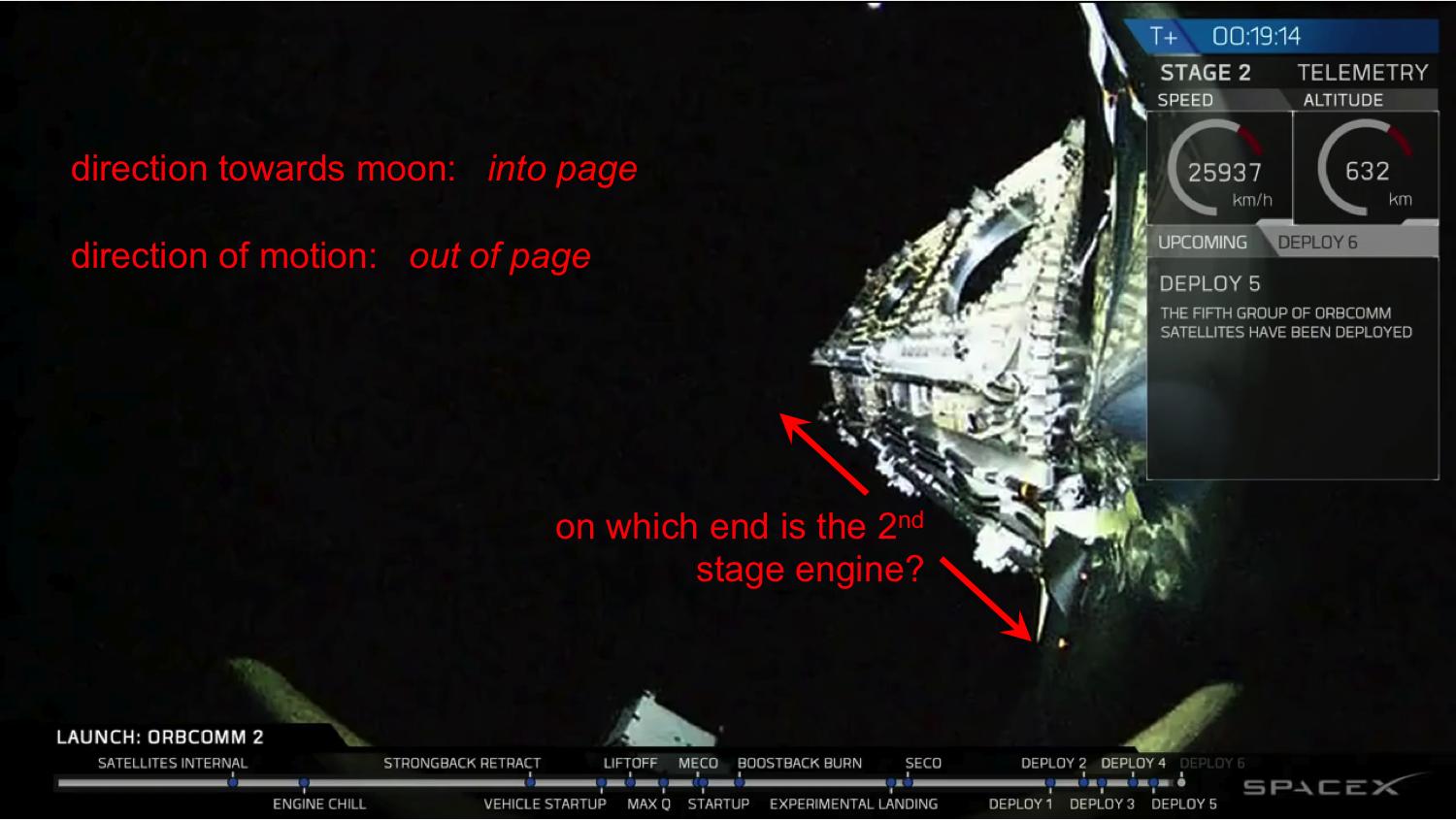 Considering the nominal sizes of the Orbcomm-2 satellites (roughly 1 x 1.3 x 0.5 meters) and the nominal size of a human, this can't be much more than 3 meters wide, and if there is still some external tube around the 2nd stage fuel tanks that should be about 3.6 meters in diameter, and clearly visible if it were at the far end in the deployment video. The image below is linked to spaceflight101

EDIT 2: I found this sentence in the Spaceflight101 article (my bold) in reference to the previous SpaceX launch of 6 Orbcomm satellites:

"Second stage shutdown came just after passing the T+9-minute 30-second mark to allow the stage to begin a short coast that included the re-orientation to the proper attitude for the spacecraft separation sequence that kicked off at T+14 minutes and 35 seconds." 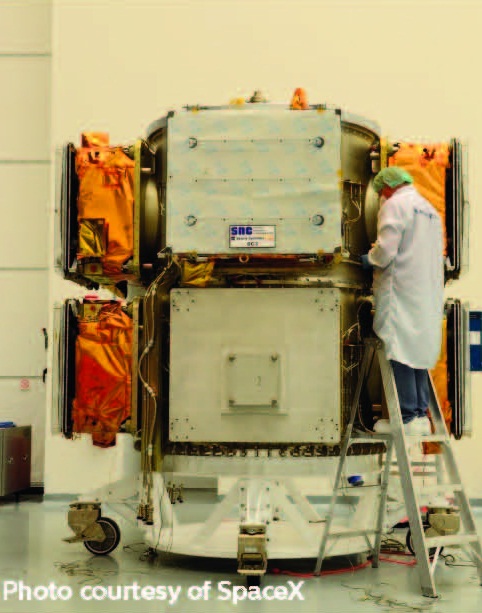 EDIT: that image (above) is actually Orbcomm-1, a previous mission. Here is an image of the Orbcomm-2 configuration prior to launch, from ORBCOMM: 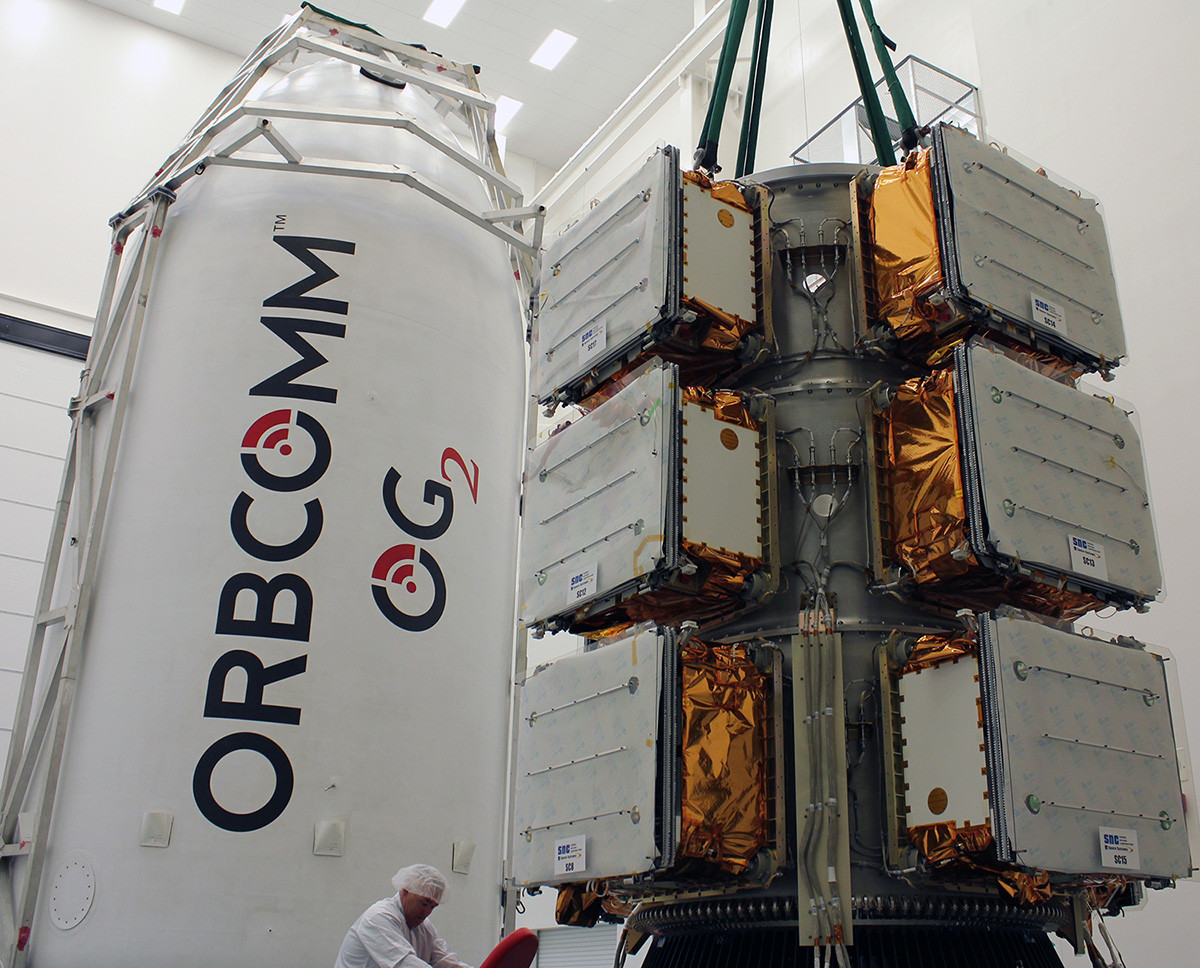 It is very likely there are two separate cameras.

They have consistently had a camera focused on the bell of the second stage, that appears also able to do IR imagery.

It would not be mounted in the airflow, since we see images of the second stage engine before MECO and with the interstage still attached.

Thus it would not likely be able to have a view forward of the payload, which is at the other end of the second stage (now longer due to the new Falcon design stretch).

18
What was the distant bright light in the SpaceX webcast of Orbcomm OG2 deployment?
8
What goes into the planning and execution of the deployment of groups of LEO satellites?

19
SpaceX first stage landing: Why not use an elevated net above the landing platform to catch the rocket?
5
What pattern of satellite release will the pentagonal Iridium arrangement use?
8
What goes into the planning and execution of the deployment of groups of LEO satellites?
5
Efficiency and timing of the Iridium-6/GRACE-FO low-power burn and coast phase?
4
What are these cartridges with holes on the Dragon trunk?
2
What orbits are Starlink satellites now deployed into? How low to do they go on their first perigee?
2
Puzzler; what can we learn about the distance and direction of Earth from this cool SpaceX-tweeted image of Earth and a vacuum nozzle?