What is the optimum shape for a spacecraft?

I understand that these days a spacecraft design is very much centred on what can be lifted into space by current rockets, hence the modular, cylindrical shape of the ISS. So, with current manufacturing and design technologies and under the huge (unrealistic) assumption that there were no restrictions on lifting materials/components into space, what would be the most optimal shape for a spacecraft in terms of some of the following example factors (others are welcome)?

I should make clear that I'm not interested in a spacecraft that has to go near any atmosphere so there doesn't need to be any consideration for aerodynamics.

Spheres are best, but cylinders are easiest to manufacture

For the most internal volume compared to the surface area, and hence the smallest possible mass, a sphere is the ideal shape for a spacecraft. The orbital module of the Soyuz spacecraft is approximately a sphere:

Most construction techniques in use are based on metal plates. Therefore, spacecraft shaped like cubes or cylinders (a bent plate) are easy to manufacture. The sharp edges are however less optimal than the sphere to withstand internal pressure.

For long stays in space, it is beneficial to have some sort of artificial gravity induced by rotation. Cylinders and toruses are then good options. They are also rather easy to inflate. (that is a launch constraint, but an important one) 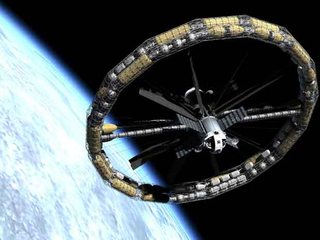 A spacecraft with artificial gravity must not necessary have to be of a curved shape, two spacecraft, or one spacecraft and a counterweight with a tether in between can basically do the same thing.

For some types of propulsion, most importantly nuclear-electric, solar sails, or solar-electric, huge areas of radiators, sails, or solar cells are necessary. That pretty much determines their shape. (huge but flat, with a long truss-segment in the middle)

Different parts of a spacecraft has different requirements, hence, you may use different shapes for them instead of an all-in-one trade off. Again, the Soyuz is an excellent example of geometry, using a sphere for the orbital module, an aerodynamically blunt body shape for the return capsule, and a cylinder for the equipment module.

One of the top priorities for a lander is to have a large base to prevent it from tipping when landing on the surface. Despite initial surveys from unmanned probes in orbit of for example the Moon, you can never be totally sure about the usefulness of a particular landing site. The Apollo 11 did for example change the target landing site in flight. Therefore, landers are typically very wide, so they do not fall over. The descent stage is often-shaped like a polygonal prism, with a symmetry depending on the number of landing legs. (three for a minimum configuration, four for a little more stability , or five or more for redundancy and extra stability).

The Apollo lunar module descent stage had an octagonal shape, corresponding to its four-fold symmetry: 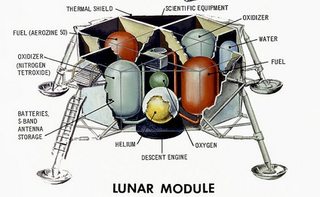 A large-enough donut or cylinder would allow for artificial gravity through rotation. Diameter would have to be several hundred m at least.

no restrictions on lifting materials/components into space

I should make clear that I'm not interested in a spacecraft that has to go near any atmosphere so there doesn't need to be any consideration for aerodynamics."

Assuming these parameters, lifting something to low earth orbit requires this something to structurally withstand roughly 2-3g during launch. So there is no logic behind building one sturdy spacecraft on the ground, able to survive launch, and then carrying dead structural weight for the rest of its lifetime.

Instead, launch raw material and one huge building or printing factory in LEO first, then produce the spacecraft there, and build it the lightest (or best fuel/structural mass ratio) it can be along the constraints or accelerations it will face.

Since there's no launch weight restrictions from Earth, one of the best missions to achieve could be sending humans towards one neigbouring stellar system, using project Orion propulsion system, in a very very huge spacecraft, tuned to constant 1g acceleration along thrust vector. Hence this spaceship will be built in LEO so that it can withstand no more than 1g (+safety margin).

There isn't just one -- or, the optimum is extremely context-dependent.

Meanwhile, since most rockets have fairings with a reasonable internal volume, spacecraft shape already isn't terribly constrained by them (though they very often fold up solar panels and the like to fit inside).

Basically, it appears that the optimal shape for many spacecraft is the components of the spacecraft, arranged in some arrangement based on the individual needs of each component, held together with struts or contained in boxes.

It may depend on the propulsion system.

Spin-gravity ships have been discussed previously, so I want to focus on a ship design I've almost never seen in scifi. That of a cone, blunt end first.

This design works best for crewed interplanetary missions where the engine is designed to burn most of the time to provide some gravity, perhaps with a short coast phase in the middle. Most scifi shows create long, thin ships with the engine on the back, but when under acceleration, this is like living in a tall, thin skyscraper with the engine at the bottom. The crew will be constantly going up and down.

A much better, lazier design, is to spread out the ship as wide as possible, so everything is placed on a similar floor level. The crew skip having to constantly climb stairs and ladders, and don't need to equip and maintain elevators.

Having the engine immediately behind a wide disk shape is unstable, so it's desirable to put the engine as far back as possible. I imagine an upside-down cone shape with the pressurized section at the widest, top part, and the fuel and supplies under it, tapering to the point of the cone, where the engine is. This lets a gimballed engine more effectively change and stabilize the ships attitude.

I think that spaceships in the far future will be analogous to biology. They will constantly reassemble and reorganize themselves to repair damages from radiation and decay and to adapt to changing environments or desires. Or simply because one structure obtained reveals that another structure is more attractive to attain in an evolutionary fashion of discovery.

Life on "spacecraft Earth" has done this spontaneously. Fundamental logics of physics, geometry and economics set some constraints, but lifeforms still vary from tiny archean bacteria to huge reptiles and mammals to distributed ant and bee colonies as genetic unit. The wisdom of this billion year long evolution seems hard to beat. Lack of gravity and lack of interaction with atmosphere/hydrosphere removes important constraints to shape.

Tethers can be very useful. Microbiology seems to be full of microscopic "hairs" which guide transports and communication. In microgravity tethers are useful to simulate gravity by rotation, and maybe for launching or capturing smaller spacecrafts.

Not the answer you're looking for? Browse other questions tagged spacecraft design spacecraft-development or ask your own question.

22
Why did the Apollo Lunar Module have four landing legs?
6
Is a spherical rocket design a plausible replacement for current designs today?
1
Optimal shape for a spinning ship/station - downsides of spheres? (Radiation shielding)

8
What instruments are necessary aboard spacecraft?
11
Are there any studies on the ideal form for a spacecraft at large velocity in vacuum?
9
What influenced the shape of the Soyuz descent module?
21
What is the ideal shape for a rocket?
23
Can you really use Arduino for a small spacecraft?
8
What is the procedure for naming spacecraft?
5
What are the future prospects for spacecraft autonomy
5
Does stress-testing a spacecraft affect its durability?
2
Would a rotating wheel spacecraft "flip"?
4
Once a spacecraft is in space what factors determines its top speed?