What is this additional plume on the Falcon 9, and is it being ignited/corrected for?

I hadn't noticed it before, but after seeing yesterday's recap video of the recent Launch and Landing of the Falcon 9, I'm wondering what the plume visible during ascent is.

You can see it clearly immediately after launch, when the video changes camera angles at around 1:04, but I've highlighted it below: 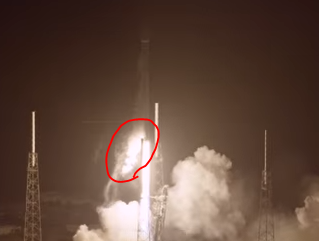 I assume it's the fuel gases continuing to be vented, and the plume appears to extend/originate from up the stack.

However, is the lower, circled part, just being illuminated by the light from the engines, or is it actually being ignited? Does the plume have any measurable affect on the attitude that the rocket has to correct for, either through the venting or ignition (if indeed it is alight)?

I checked the CRS-6 launch (which launched at daytime, so you can see more on the video).

The vapor occurs during the entire sequence from T+0 to T+1m, I'd say that rules out ascent heating as the main driver for the vapor. It surprises me that LOX boiloff is rapid enough to require venting even while the tank is being drained at a gigantic rate.

There's also some ice coming off the LOX tanks, you can see chunks coming off from launch to T+1 minute. But that doesn't seem to be the source of the vapor. The gas generator exhausts are right next to the engine bells, so that's definitely not it.

Not the answer you're looking for? Browse other questions tagged spacex falcon-9 plume or ask your own question.