What is all the stuff that goes flying during a launch?

In today's SpaceX launch, at 41:25-41:28 there are a lot of dark objects which appear to be flying debris, almost like they might be parts of the light poles etc. which are visible on/near the launch pad before liftoff:

What are those flying pieces, and how much of a launch pad site typically has to be reconstructed after a launch because of damage from the launch?

How much of the immediate "post-launch [pad] operations" they are talking about in that clip is about collecting the debris and/or repairing that damage?

Most likely it is light debris, stuff like leaves, dirt, anything that literally is not bolted hard to the ground. They clear the pad of obvious loose stuff, almost like on an aircraft carrier where they sweep for FOD (Foreign object debris) but there is a lot of ground around a launch pad.

Also, recall the engines of a rocket, unlike a plane on a carrier or even a normal runway, do not inject air rather it exhausts huge amounts, so almost anything that does blow, will blow away (far away) instead of being sucked into an engine. (Eagles may soar, but weasles don't get sucked into jet engines).

If you look a bit earlier you will see a splash of dark stuff come up the left side of the rockets as well. That is water from the Niagara deluge system, which is designed to protect the pad from acoustic damage. The system dumps amazingly large amounts of water, which the heat boils, instead of the concrete, and the water absorbs the sound (also causing it to heat up) instead of vibrating the concrete.

Other launches have had the dirty looking water splash pretty high up and get the pretty booster dirty. But as we saw in Orbcomm OG2 launch and landing, coming back, through your own RP1/LOX exhaust is pretty dirty work from all the soot on the first stage.

Thus the water minimizes the physical damage to a lot of the pad surface. However, a 1.3 million lb thrust rocket just lit on top of the pad and flew away, stuff is going to be damaged. The trick is to make the expensive stuff resilient and the stuff that is going to get destroyed anyway, cheap and easily replaceable.

SpaceX is clearly far along in the learning phase as they just completed their 21st launch campaign, and they seem to be getting better at resetting for the next launch. 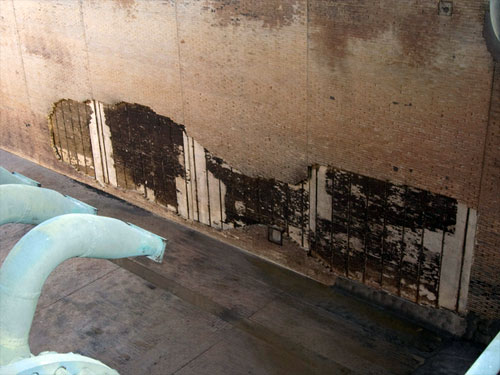 Not the answer you're looking for? Browse other questions tagged launch rockets falcon-9 launch-site launchpad or ask your own question.

6
Are sirens (etc.) sounded before launches to warn wildlife?

12
Are all rocket launch sites surrounded by water bodies?
15
Do all rockets get fueled during the countdown?
10
What are the advantages and disadvantages of assembling a launch vehicle horizontally?
11
How risky is launching a rocket during a geomagnetic and solar radiation storm?
12
What dangers are on a launch pad after a successful launch?
15
How often are space launches substantially delayed by protests physically at the launch site?
4
What type of work goes into refurbishing a launch pad?
4
Why does the SpaceX strongback outgas 60 seconds before launch?