What were the differences between Space Shuttle's and Buran's reentry guidance?

Assuming unpowered flight, what were the significant differences between the STS orbiter and the Buran in:

The Buran's computer is cadenced à 4MHz (3 MHz for STS), consisting of 4 independent units and 5 independent units on the shuttles. the dead memory is stored on magnetic tapes, the memory of the Buran's computer is 819 200 words of 32 bits and for shuttle 106 496 words of 16 bits which give buran a better calculation power. Shuttles used FORTAN algorithms whereas for Buran new computer science languages were developed (high and down level). It's more powerful because it uses all the power of the hardware but needs more time to make the language and needs more time for the engineers and technicians to be fully ready to work on it. 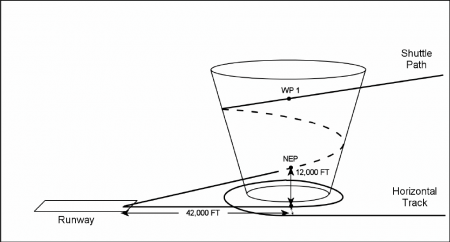 During re-entry , the orbiter encounters the main air of the atmosphere and is able to fly like an airplane. It is designed as a lifting body design with swept back "delta" wings which can generate lift with a small wing area. flight computers fly the orbiter. The orbiter makes a series of S-shaped, banking turns to slow its descent speed as it begins its final approach to the runway. The commander picks up a radio beacon from the runway (Tactical Air Navigation System) when the orbiter is about 140 miles (225 km) away from the landing site and 150,000 feet (45,700 m) high. At 25 miles (40 km) out, the shuttle's landing computers give up control to the commander. The commander flies the shuttle around an imaginary cylinder (18,000 feet or 5,500 m in diameter) to line the orbiter up with the runway and drop the altitude. During the final approach, the commander steepens the angle of descent to minus 20 degrees

The difficulty in creating algorithms for automatic traffic control was the fact that the conditions orbiter should be able to point out any areas of admissible initial conditions of entry into the atmosphere at an altitude of 100 km in a time just over 30 minutes to land at a given airport located at a distance of more than 8000 km, while paying off the flight speed to 28,000 km / h to zero.

Not the answer you're looking for? Browse other questions tagged space-shuttle reentry buran guidance or ask your own question.

13
Was the possibility of damage to the SS Columbia made public before it reentered on Feb 1, 2003?
12
What are the requirements differences between Escape Suit and EVA Suit?
12
What were the Space Shuttle's rules about flying through clouds?
5
Were there problems with the Russian Buran space shuttle's reusability?
4
What systems were used onboard Buran to determine its position during reentry and landing?
27
What were the differences between the STS Orbiters?
7
Did the Apollo LM's cockpit altitude displays account for the pointing angle of the radar altimeter?
6
What were the space shuttle’s emergency procedures for an SRB or ET separation failure?
11
What caused STS-129's low energy condition on the HAC?