For circular orbits the most efficient transfer is achieved with a hohmann transfer or a bi-elliptic transfer.

But what is the most efficient way to transfer between elliptical orbits?

I assume in the general case this isn't easily solvable (correct me if I'm wrong) but for the reduced case where only one orbit is elliptical: 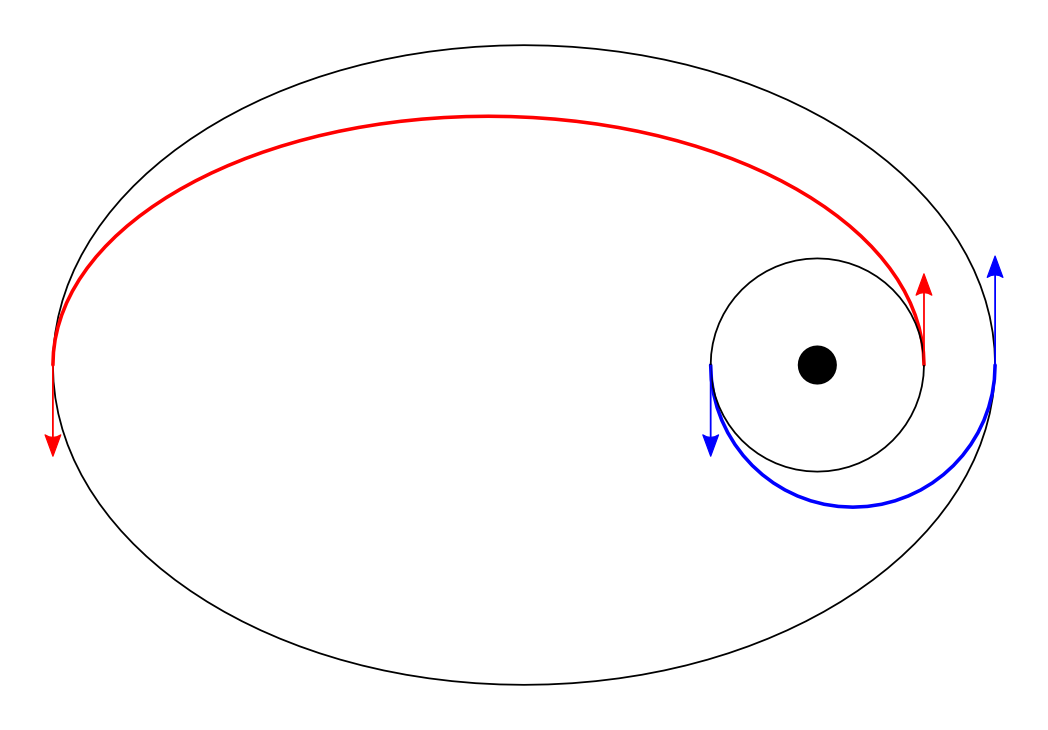 I would (intuitively) assume that the optimal transfer is either the red or the blue one but I don't know how to calculate this myself.

Googling my question title I found these two links which probably answer my question but aren't publicly accessible and this paper though this only seems to talk about circular orbits.

It is my belief that a bitangential transfer between two coplanar orbits is best. For such a transfer, no direction change is needed at departure or arrival since velocity vectors are parallel at these two points. 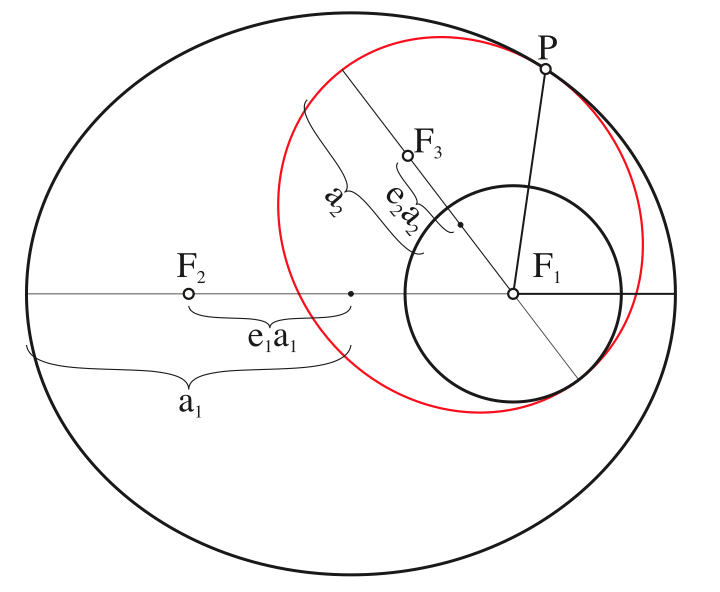 The red orbit pictured above is tangent to the circular departure orbit as well as the elliptical destination orbit.

Here's a picture of many possible bitangential transfer orbits: 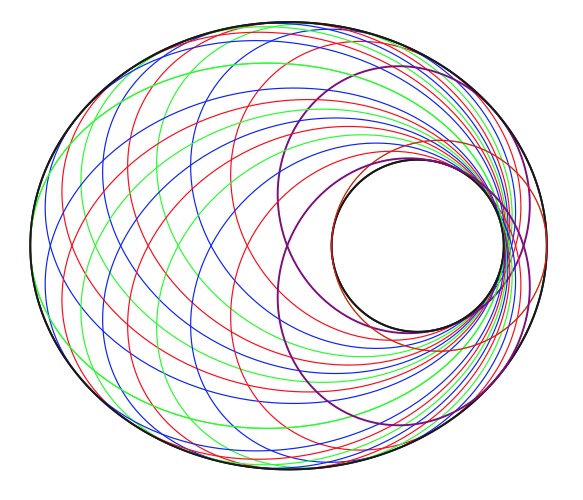 As with the earlier illustration, possible transfer orbits are colored, departure and destination orbits black.

For all these, the departure and arrival Vinfinity sum to very close to the same quantity (if my arithmetic's correct).

However, if the circular departure orbit is earth's and the elliptical destination orbit is an asteroid's, the longest transfer is the best. This makes rendezvous at the asteroid's aphelion. At this point the departure Vinf is at a maximum and arrival Vinf is at a minimum. But the big departure Vinf is largely mitigated by the Oberth benefit since earth has a deep gravity well. So of the two orbits you illustrate, the red one is less.

I write about these sorts of transfers at Tangent Ellipses. I made a spreadsheet looking at these orbits. A caveat: The spreadsheet is very complicated and no one has reviewed it. I am not confident it's error free. With that disclaimer out of the way, here's a link to it.

You may be interested in this often cited paper by Shoemaker and Helin: Earth-Approaching Asteroids as Targets for Exploration. The delta Vs they list assume a bitangential transfer with rendezvous at the asteroid's aphelion.

I can give you an upper bound for the necessary $\Delta v$, between all elliptical orbits, regardless of inclination. You can always do a bi-elliptical transfer, performed by almost reaching escape velocity, then do a close to 0 $\Delta v$ manoeuvre at infinity, and then fall back to insert into the target orbit. Both the large burns are done at periapse. You can then always do the transfer in:

where $r_a$ and $r_p$ are radius of apoapse and periapse for the two orbits, and $\mu$ is the gravitational parameter.

By the way, the red one is the most efficient one on your illustration. If the orbits are coplanar and one is circular, your manoeuvre can be performed in:

I don't know the answer for certain, but am willing to hazard a guess that the most efficient way of transferring between a circular orbit and an elliptical orbit, assuming for a moment that they are coplanar, remains a single Hohmann transfer.

Changing the eccentricity of an orbit requires a burn delivering the proper velocity change (including the burn attitude) at the appropriate point in the orbit. This is done at the end of a traditional Hohmann transfer orbit to re-circularize the orbit at the desired distance from the barycenter, which becomes our new orbital radius. Once our orbit is circular, we could, in principle, apply another burn to change to a different elliptical orbit with the semi-major axis being the circular orbit's radius. By allowing the time between the burns to go to 0 and recalculating the second de-circularization burn based on the new point in the orbit at which it happens, we can turn these two burns into a single burn.

It follows from the same line of reasoning that this should work equally well whether none, either or both of the endpoint orbits involved are circular or elliptic. (If the origin orbit is elliptical, you simply, at some point during the first burn, are instantaneously in a circular orbit.)

I am not sure that the bitangential transfer between two coplanar orbits is exist, we have to check that the focus of the transfer orbit is the same as center of attraction.

there is some direct and indirect method to solve the problem, for direct solution, we need to achieve the first derivative of delta V versus of the independent parameters. For the indirect method, we need a numerical solution such as GA and PSO. There is some paper which have already solved some numerical example. However, I am publishing a paper in which I solved lots of different cases to find an appropriate fitting function.

Not the answer you're looking for? Browse other questions tagged orbital-mechanics orbital-maneuver delta-v low-energy-transfer or ask your own question.

1
Descending into any orbit: Which requires less delta-v, a wide one, or a narrow-elliptic one?
3
Optimum delta-v burn to change periapsis or apoapsis at an arbitrary point on an elliptical orbit?
20
Is the ideal transfer between two arbitrary planar orbits always a bi-tangential ellipse?
4
How to intuitively explain that tri-elliptic transfers are not better than bi-elliptic transfers?
5
Elliptical orbits transformed to "equivalent" circular orbit
4
Ratio of low-thrust slow spiral to Hohmann transfer $\Delta V$?
8
Fastest orbit transfer constrained by maximum g-force magnitude
1
How to find the transfer orbit from a initial circular orbit to a final elliptical orbit
5
What is the highest number of impulses required for an optimal orbital transfer?
2
Is it (theoretically) correct to apply an equation that is derived from a hyperbolic trajectory, to an elliptic transfer orbit?