I heard the other day that to take cargo from Earth to a Lagrange point or the Moon using solar electric propulsion would be a problem because the Van Allen radiation belts would degrade the solar panels excessively. How long would the ship be in the radiation belts, how quickly would this occur and what specifically would be the kind of damage done?

(Geoff Landis mentioned this during his interview Monday on The Space Show.)

This response addresses the generic degradation of solar arrays passing through Van Allen belts, rather than those specifically bound for the moon.

Its a topic that has stirred up a lot of interest in the last few years as Boeing, a manufacturer of commercial communications satellites, announced a launch of two satellites designed to be deployed in GTO and transferred to GEO with electric propulsion. They (Eutelsat 115 West B and ABS 3A) were launched in 2015 and are now on station.

Prior to this I am only aware of two other satellites having made such a transfer with thrusters that were not intended for that part of the mission. One was Artemis and the other was AEHF-1, and this was in both cases because of earlier failures that would otherwise have prevented deployment in GEO. I believe that all other satellites to date employing ion thrusters or hall effect thrusters have done so with their primary use being for station-keeping once delivered to GEO and they have not spent a long time in transit.

I think this recent paper is relevant: Space Weather Concerns for All-Electric Propulsion Satellites from Ref 1.

I have extracted the following figure from it: 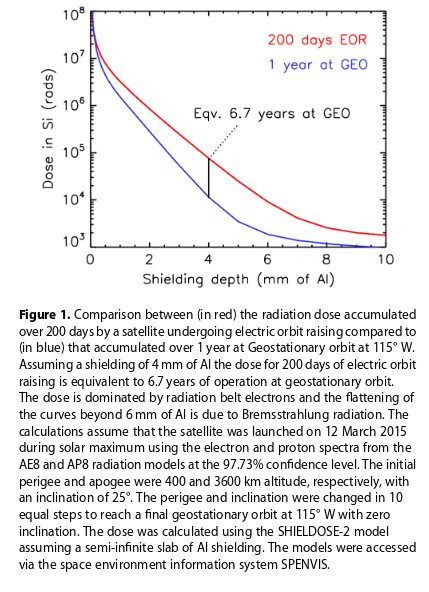 Satellites are designed with shielding against specifications which in turn depend upon a good picture of the environment. Solar arrays can, to degree, be protected by thicker cover-glasses, hence the 6.7 year part of the caption does not apply to solar arrays other than to show the concept. I believe the Van Allen probes, mentioned in PearsonArtPhoto's response will have featured allowances for uncertainties in the very phenomenon they are there to measure. In the case of geostationary communications satellites which are usually relatively power-hungry compared to science satellites, the effect of mis-judging the uncertainties would be felt later in the mission as the available power dropped.

Lastly, referring to a part of the Dr. Geoffrey Landis article referred to in the question:

He noted the slow speed used by this form of propulsion to transit the Van Allen radiation belts saying that for HSF, one must go through the belts much faster. He said nuclear propulsion was needed, mentioned the fear factor that several have but that we should develop and implement it.

His solution may be consistent with some lunar mission scenarios though there isn't enough context given to conclude that it is "needed".

It turns out that IEEE Xplore Nuclear Science published a paper on the subject of solar cell degradation in the Van Allen belts. While I can't read the paper, it mentions that N-P solar cells (The most common) are what is susceptible to any damage by being in this region in the abstract. This paper was published in 1963. In any case, the most damaging part of the belt is the inner belt, which ranges from 600 to 3700 miles, which, correctly, a satellite going from LEO to Lunar orbit would spend significant time in.

In fact, there are spacecraft that fly in this region. The most high profile is the Van Allen Probes, which were intended to study the region. I can't actually find anything about the solar panels being a concern.

My thoughts is that this would degrade the overall lifetime of the panels, but wouldn't significantly affect the capacity. At least 2 years of operating in the worst part of the Van Allen belts is possible, and I believe this would work for some period of time, as only a relatively small portion of the mission would be in the belts. A single cargo mission? Well, there's been plenty of missions that have gone through the belts using ion drives, I don't think that's even a major concern.

Not the answer you're looking for? Browse other questions tagged the-moon radiation solar-power ion-thruster van-allen-belt or ask your own question.