Is this a correct understanding of Tsiolkovsky's rocket equation?

When I graph the rocket equation, substituting arbitrary values for v(exhaust) and m1, so m0 because m1 - m0, the graph implies that increasing propellant mass past a certain point does not increase the delta V by very much.

Likewise, if I plot the inverse of the function, the graph implies that for increasing delta V values, extremely high propellant masses are required, and there is a vertical asymptote. Does this not imply that a rocket has a maximum delta V?

Also, what is the significance of the graph of the derivative? of the integral?

The implication of the rocket equation is that linear increases in ∆v require exponential increases in mass ratio for a single stage.

There's not strictly a maximum delta-v -- if you redo your plot on a log scale, you'll see that it doesn't go vertical.

Getting very high mass ratios (much above 10:1) is difficult to do on a single stage, so there is a practical ∆v limit there.

The derivative of that plot is a rate of change of mass with respect to rate of change in velocity. For a rocket at a particular point in flight, it tells how much propellant mass needs to be expended in order to increase its speed by a given amount; for a rocket on the drawing board, it tells how much more propellant needs to be carried in order to increase its capability as defined by ∆v.

I don't know if there are any useful interpretations of the integral.

Your question is about the behavior of the Tsiolkovsky rocket equation itself, in the limit of very small final mass (dry mass). Roughly: "is there any limit to delta-v in theory?"

$$ \Delta v=v_e \ln\frac{m_0}{m_f}. $$ If you just look at the velocity ratio and the mass ratio: $$ \frac{\Delta v}{v_e}=\ln\frac{m_0}{m_f}=-\ln\frac{m_f}{m_0}, $$ you can see that one is just the log of the other. Log keeps increasing forever, but more and more slowly. It never reaches an asymptote. It shoots up fast on the linear plot, but if you change the x-axis from linear to log, the velocity ratio just continues to increase. 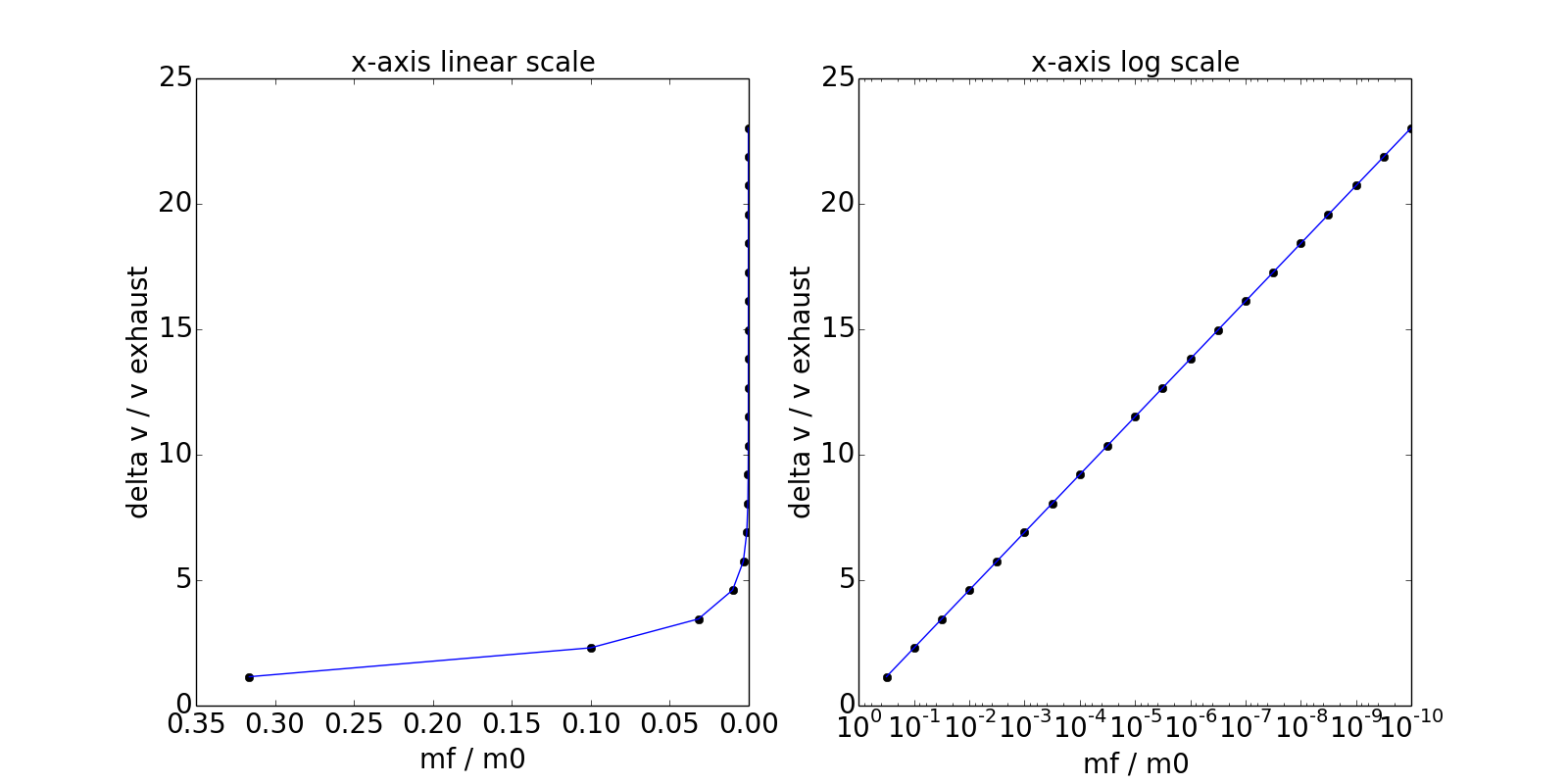 If the final mass is one billionth of the start mass, you can get a delta-v that is over 20 times the exhaust velocity. Theoretically.

So I think that the answer to your question, just from the mathematical point of view, based on the rocket equation is no. There's no limit here. If your rocket is made of pure fuel, with a magic massless nozzle, it can go very very fast!

But for sure, as the other answers suggest, a physical rocket we can build and launch does have a very real (and so far very expensive) physical limit.

Here is some Python code for the plot:

No, that is not quite right. Let's first state and describe the Tsiolkovsky Rocket Equation:

$\Delta v$ is delta v, the change in velocity in km/s

$\ln()$ is just the natural logarithm, or log base e (e is an interesting mathematical constant approximately equal to 2.7). Almost all scientific and graphing calcs has an ln() function.

$m_i$ and $m_f$ are initial and final masses in kg

Go to fooplot.com and type in "ln(x)" without quotes. You will see a black curve. In this graph, our ratio r is now called x, and y represents the delta v.

Yes there is a vertical asymptote on the left, coinciding with the y-axis itself. This would imply some really weird stuff about an unbounded negative limit of delta v (so you could go infinitely fast with a negative speed!)...except that our ratio cannot be less than 1...because initial mass is always greater than final mass. That's just how chemical rockets work. They burn mass and thus lose mass. You always start with more fuel than you end with. In mathematical terms, this means that the valid domain starts at x > 1. x <= 1 is just not physically possible.

Another way of saying that, is that logarithms behave with exponential decay. However, "exponential" is used very loosely these days. I don't recommend that terminology! Just to confuse you more, a horizontal asymptote is also called exponential decay! (of another kind).

BTW you can multiply "ln(x)" by whatever Ve you want and it will not change the graph's behavior. Fair warning though, if you type in a typical number that real-world rockets use, such as 3,000 (m/s), you will have to zoom way, way out in order to see the curve. That's why I like working in km/s so you only multiply by 3.

Bottom line about the equation: there is no max delta v. If you're willing to exponentially increase the mass ratio, you can linearly increase the delta v to any high value you want. This does not mean, however, that it's physically possible. There are of course technological limits on how much thrust, heat, and other stuff we can controllably achieve in our rocket.

You asked about the derivative and integral too. You also mentioned the inverse of the Tsiolkovsky Rocket Equation in your second paragraph. I will try to explain what those mean in a future edit.

Not the answer you're looking for? Browse other questions tagged rockets delta-v specific-impulse mass-fraction rocket-equation or ask your own question.

87
How much bigger could Earth be, before rockets wouldn't work?
4
What is the formula to calculate how much fuel is needed for a rocket?
9
Pre-flight concepts of space travel
6
Fuel needed for rocket lift-off as a function of the altitude
5
Intercepting another satellite