Use of steerable parachutes for re-entry

Apart from testing Rogallo wing for Gemini capsules are there any cases of use of steerable parachutes/wings for final phase of re-entry of space vehicle?

When landing in big steppe or ocean it doesn't really matter, but it would be useful to have ability to steer if landing takes place in some area with obstacles (for one reason or another).

What would be disadvantages of such system (I guess weight and complexity)?

In addition to Erik's answer I might be able to give you some insights on some disadvantages. I've been growing up around parachutes and until about 10 - 15 years ago you would often see people having a parafoil as a main canopy and a round one as a reserve (today it's very different, but that's not really relevant).

Round canopies are much simpler than parafoils and their openings have a higher chance of being successful. When a parafoil opens, the object which is attached to it should be stable and still. This means that the object can not have any forward movement, side movement or up and down movement. The object should also have the parachute having on top. If a parafoil is opened with any of the above factors present, chances are high you will end up with a (small) malfunction. A person under a canopy can easily "debug" these malfunctions, machines however can't. While round canopies can be susceptible to these malfunctions, they tend to be a lot more forgiving than parafoils.

Because of the shape and nature of a parafoil, twists and line-overs can happen during deployment of the canopy (I'm not taking into account malfunctions generally associated with bad packing of the canopy). With a round canopy (line overs don't really exist) this would not cause any trouble as the canopy would still be symmetrical. With a parafoil you will make one of the corners or sides unstable (this is how parafoils are steered), this will result in the canopy starting to pitch down to one corner and start turning. If the malfunction is not resolved the canopy will start spinning down and picking up vertical speed, ultimately resulting in a high speed crash.

In normal skydiving you would just cut away the canopy and deploy your reserve chute. I guess this could be implemented in spacecraft as well, but due to the weight of the spacecraft the vertical distance covered between start of the parachute deployment and deployed canopy might take a few thousand feet. Take into account that people want to reduce the weight of these things as much as possible, so another canopy this size might be around 100-200 kg in extra equipment for a reserve chute.

The X-38 (based on the outer mold line of the X-24 lifting body) was planning to use the largest parafoil parachute in history for its final deceleration. Alas, she only flew as a test.

This parafoil was actually designed to autonomously deliver light armor to forward operating locations for the military. 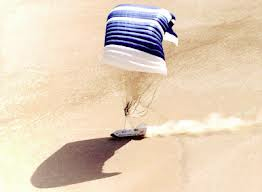 11
Did any Apollo missions have backup parachutes?
4
Can I use an ice cube as a re-entry heat shield?
2
What's the minimium velocity for re-entry flames to start?
7
What is crossrange and downrange for an entry vehicle?
6
In multiple parachutes, is each offset by a weight/hole?
19
Could one skydive from a space capsule that just had a parachute failure during re-entry?
5
How do Crew Dragon's main parachutes deploy?