Why would Hollywood's Planet X (at earth's L3) be unstable?

"NASA is unlikely to find any use for the L3 point since it remains hidden behind the Sun at all times. The idea of a hidden "Planet-X" at the L3 point has been a popular topic in science fiction writing. The instability of Planet X's orbit (on a time scale of 150 years) didn't stop Hollywood from turning out classics like The Man from Planet X."

For the sake of discussion of the question of stability: if there hypothetically were a planet, with say a mass roughly equivalent to earth, then would it really be unstable in the same way that a low-mass object would be unstable at Earth's L3? And wouldn't that mean that both it and earth would be similarly unstable? Or does this only refer to the idea that it could't remain hidden behind the sun for hundreds of years, as a very old calculation summarized on this webpage which I found here seems to suggest. Has this calculation been repeated and reported more recently?

note: this all stared from a conversation below this question

note 2: while this question is about the statement about stability of a planet opposite earth, from this answer it seems that the quote above should point to Journey to the Far Side of the Sun (1969) and not point to The Man from Planet X (1951)

Because Earth and the Sun are not alone in this dance. Jupiter and Venus tug on us too. They have unsynochrized periods and slightly different inclinations. If a copy of Earth were suddenly put at L3, it would soon gradually spiral into another orbit. And unavoidably collide with us. Such a copycat planet 180 degrees away would have to have a Moon like ours with identical mass and orbital parameters too, because it influences Earth's orbit around the Sun. It irregularly sometimes pulls us ahead or away when we are slightly closer to the Sun, because of the eccentricities of both Earth and the Moon. For the same reason that there is not an even number of months per year. I have not done the math, this is a simple (and rare) case where sound space intuition knows why it is impossible.

With the 5 Lagrange points, there is a local 0 gravitational field. Of them, L4/L5 are "hills", such that a small deviation from perfect will tend to put them back on course. L1/L2/L3 are "Saddles", which means if they can stay perfectly on point, they will remain, otherwise they will slowly start to drift. This can be seen in this illustration of the Lagrange points: 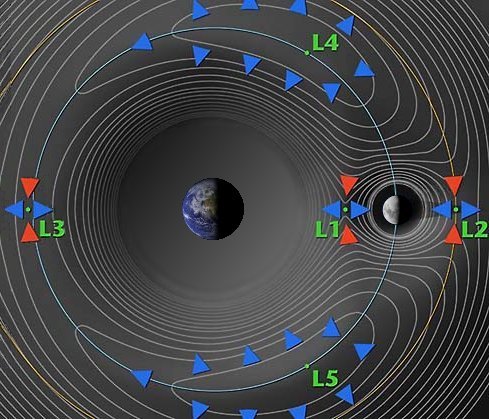 L3 will tend to remain at the right distance, but not the right relative spot in the orbit. This will eventually cause it to fall out of that alignment.

Incidentally, a current theory regarding the formation of the moon is that a Mars sized planet formed at the Earth-Sun L4 point. This object has been nicknamed "Theia". It eventually was nudged out, after millions of years. Even such a relatively stable location long term isn't stable, due to the other planets in our Solar System, which tend to gently nudge objects periodically.

Not the answer you're looking for? Browse other questions tagged orbital-mechanics lagrangian-points planet myth-busting or ask your own question.

6
Any satellites in Earth-Sun L3 point?
9
Why has the Earth's motion carried it out of view of Pioneer 11's antenna?
6
Are the Earth's 10 Lagrange points stable and large enough to park multiple satelites/space vessels
5
Why are there so many apisidal names
5
Can L3 have halo orbits?
1
Could another Earth sized planet safely orbit our Sun?

36
Why should the James Webb Space telescope stay in the unstable L2?
13
If something "falls off" the L2 or L1 point, where will it go?
6
How much accuracy is required to achieve interplanetary orbit without adjustment or deceleration?
12
Low Energy Transfer within Earth-Moon system
11
Are any spacecraft heading remotely where Planet 9 is expected to be?
17
Are some Halo Orbits actually Stable? (stable orbits about unstable Lagrange points)
1
Did ISEE-3 spend a few years in a halo orbit around sun-earth $L_1$ without using any fuel?
2
Do horseshoe orbits have anything to do with Lagrange points? Do words fail us here?
6
Could a solar sail composed of smart glass stay near the L1 point of Venus?