Suppose I start on Earth and make a Hohmann transfer to Neptune. After traveling along my initial trajectory, I arrive at the Neptunian system. However, the objects in the Neptune system are going faster than I am (they approach from behind me). So if I want to fall into orbit around Neptune itself, I need to do another burn.

But I want to orbit one of the moons of Neptune, not Neptune itself, directly. I don't care which direction.

Say I pick Triton, which happens to be the largest retrograde moon in the solar system. My question: would Triton's orbiting retrograde made it easier (less delta-V) to capture into an orbit around it?

There are two ways of entering the system, depending on what side of the planet you fly by. The two are entirely equivalent, so you can chose what is going to be "prograde", and what is going to be "retrograde". Nothing special about the Triton case then. That is NOT to say that what direction you chose to enter is not important, it just mean that the general motion of the moon system is not important. You can just enter through the mirrored fly-by trajectory to inverse the rotation. The same rules as for regular approaches to gas giant moons apply then: Do not encounter the moon head on, but instead go parallel with it in the same rotational direction. 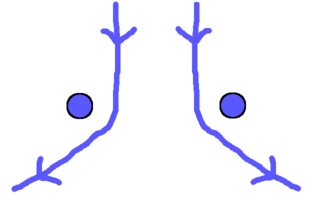 It certainly makes a difference - entering on the prograde direction relative to the moon's orbit is much more beneficial in outward Hohmann transfer.

The upper image shows the needed trajectory in the planet's frame of reference. The bottom one is from the Sun's reference frame. 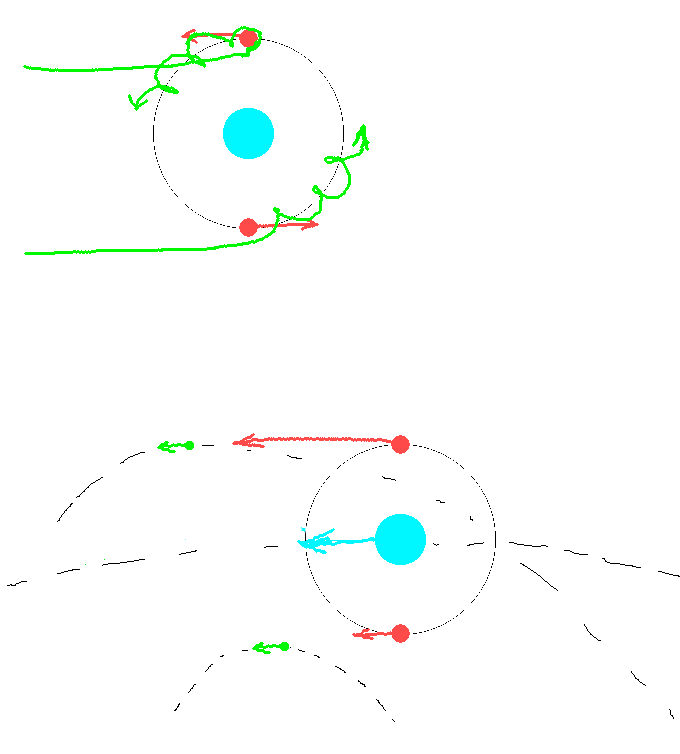 Relative to the Sun, given moon moves in an epicycle trajectory. Epicycles have a part that is much faster than "standard" orbital speed around the Sun, when the moon and the planet move in accord, and drops of speed - going into negatives sometimes - when the planet and the Moon go in opposite directions.

Since your spacecraft is at apogeum of its elliptical orbit, its speed is much slower than that of bodies in circular orbit at the same altitude. That means matching speed with a body that moves below speed of circular orbit is easier than with one that is even faster than the planet.

The whole situation, obviously, is reversed if you arrive from outer planets towards inner ones. That is, you still want to meet the moon in its prograde orbit direction, but you meet it on the side where it moves fast relative to the Sun.

Now, there's still the matter of whether to enter prograde relative to the moon's spin. This really doesn't matter unless you plan to land (or deploy a lander) in which case prograde is beneficial, meaning the moon's rotary speed may be substracted from delta-V needed to land, instead of added.

Not the answer you're looking for? Browse other questions tagged moons hohmann-transfer retrograde-orbit or ask your own question.

11
Would a satellite in retrograde orbit have a different speed than it would in prograde?
7
Hohmann Transfer Equation of Motion
9
To what extent could a single Triton flyby slow down a direct Hohmann transfer to Neptune for NOI?
3
From which direction should a spacecraft intercept a target planet's sphere of influence for an inner-to-outer planet trajectory?
6
Is Hohmann transfer the most frequent transfer orbit?
1
Orion Exploration Mission-1; clarification and additional trajectory information?
6
Orbital Rendezvous vs Hohmann Transfer
20
Escaping moons conflict with what I understand of gravity