Could a spy satellite image another satellite?

Is it possible for one satellite to image another at high resolution? Would this information be useful from an intelligence perspective?

You don't have to expect of the intelligence community to divulge classified information to see if this is possible, it has been done before by civilian satellites: 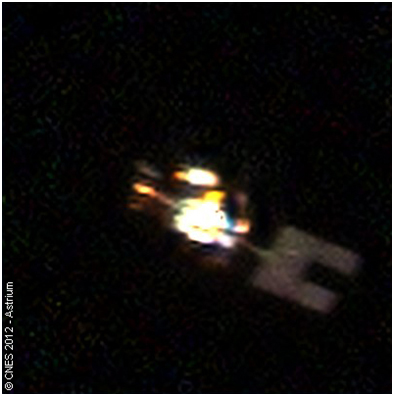 Taking images of satellites in different orbits isn't easy though, and depending on wavelength, it might not be of much use to infer information that otherwise isn't yet known and is considered valuable. So it somewhat depends on what you mean with "imaging";

First, observations in visual range aren't useful beyond providing another reference point where and when the observed object was and updating your knowledge of its orbit with it. It might be useful if the satellite is fragmented, or otherwise in a bad shape (e.g. you could infer that it failed to deploy one or more solar panels, that its multi-layer insulation might be torn, or that it's in unrecoverable tumble), but you'll also be dealing with a lot of glare and other optical aberrations when the satellite is illuminated either by the Sun or the Moon, and insufficient illumination when it's in both these objects' shadows or in transit across them and all you're able to get is the object's contours.

In infrared wavelengths, things get a bit more useful and you can potentially even infer if the satellite is even still functional, and even get an estimate of how much of propellants it has left based on its thermal signature (by measuring its thermal inertia you can estimate how much mass is subject to thermal cycling, assuming of course good enough imaging resolution and several observations of the same object).

With active radar imaging, it should be possible to get a lot more detailed geometry of the object that isn't affected by light and thermal cycling, assuming it has good radar signature and isn't deliberately made stealth and less visible to radars. You can probably remember some of the recent animations of active radar imaging of certain Near Earth Asteroids (like the Halloween / Pumpkin / Skull asteroid 2015 TB145 or the asteroid 2004 BL86 that was imaged with the DSN radar and was discovered to have a small moonlet).

But all this imaging means that you'll have to first get a good sense of its orbit, so you can conduct imaging at various wavelengths for sufficiently long exposure times and maintain fixed attitude relative to it for the duration of imaging, to infer whatever information you need about it that you didn't yet obtain by other means. And those other means are often much easier.

For example, an active satellite would likely produce compromising emanations that you could detect by simply listening to it in radio wavelengths. Some old Soviet satellites tried very hard to avoid that and were taking reconnaissance photographs on film and then releasing those films in tiny capsules so they fell back on Earth over the Soviet territory. But that takes a lot of time to get information you need, and since data is only valuable information while it's still relevant, such obscure methods of concealing the object's purpose should be a thing of the past by now. And in your face reconnaissance comes with an added value of your adversary having to resort to more expensive and technologically advanced means of concealment, anyway.

So, in short, direct imaging of satellites doesn't have too much value to the intelligence community, or the information it could provide could be inferred with easier and cheaper means than large orbital facilities. And since you either have to match observed object's orbit (something that's rather prohibitive in terms of required reaction mass), or it will still rise and set from your vantage point just like it would to ground observatories, it makes little sense to make such investments. It is unclear what exact NRO projects were cancelled that resulted in NASA getting a couple of Hubble-size telescopes for free, but it's entirely possible that, among other possible tasks, they were also meant to image orbital assets of other nations. If that bears some truth, then they must have come to the same conclusion than I did at the start of this paragraph.

It is quite possible. HiRISE has attempted to image other satellites in orbit around Mars (Specifically MGS, although the attempt was not successful). Mars Global Surveyor could, and in fact was successful at taking a few pictures, for instance, Mars Express seen below. MGO wasn't really intended to take such photographs, but the photo is still quite high resolution. 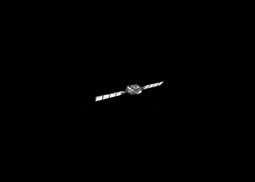 As for the high resolution, it is theoretically possible, but one is probably better off using ground based assets, as you can get a larger mirror.

Bottom line, you could probably do it, it would take some skill, perfect timing, a bit of luck, etc. There must be some valuable information about satellites gathered from such, such as their optics size, antenna size, design, etc. I have almost no doubt that there is information being gathered about orbiting satellites, some small part may be gathered by orbiting satellites, and that the practice will continue for some time.

To offer some supplementary information and perspective on viewing satellites, some years ago two Amateur astronomers got a "knock on the door", after using a 12" guided telescope they 'stacked' over 100 images of a US spy satellite. One can read further at Scientific American and Phil Plait's Bad Astronomy and links therein.

The article they published (which I'm still looking for) was something like "Why are US Spy Satellites painted Orange", with modern day digital cameras and optics there are a lot of people doing this as a hobby it seems.

So in some respects there is no need to go to space, although getting above the atmosphere and "seeing" effects does offer the best resolution with all else being equal.

On occasion, an imaging satellite will fly close enough to another satellite to obtain a resolved picture of it. This technique, called "satellite-to-satellite" imaging or "sat-squared," has been rumored to be in use for several years using reconnaissance satellites. An unclassified example is this optical image of the ERS-1 radar satellite imaged by the SPOT-4 remote sensing satellite in May of 1998. For further details, see http://spot4.cnes.fr/spot4_gb/im-ers-0.htm

At that link, you can see the following:

The viewing conditions were calculated at CNES and required complete knowledge of the satellites' respective positions. SPOT 4's orbit was determined using the facilities at the operations control centre for SPOT satellites at CNES/Toulouse, while the orbit for ERS-1 was determined by the ESA/ESOC/Darmstadt centre which controls it. The SPOT 4 telescopes, with their oblique viewing mirror, took this image above the Ténéré desert in Niger, on 6 May 1998 at 9:56 UT.

From its orbit at an altitude of 820 km, SPOT 4 is able to pick out details of 10 metres on the Earth's surface, which is moving at a speed of 24,000 km per hour. The ERS-1 orbit is 41 km below that of SPOT, which means that the latter can distinguish details of 50 cm in size on ERS-1. However, since ERS-1 flies much lower it flies faster than SPOT 4 and overtakes it with a relative velocity of about 250 km/h. These exceptional viewing conditions explain why the raw image (18 columns by 125 rows) is so distorted. Corrective processing was applied at CNES to restore the normal appearance of ERS-1.

ERS-1 is a radar observation satellite. On the right-hand side of the image may be seen the platform and the solar array, which are the same as SPOT's. On the left-hand side is the long, rectangular, synthetic aperture radar antenna of 10m x 1m, as well as two of the three scatterometer antennae used to measure wind fields. These two small antennae, inclined at 45°, are shorter and narrower (with dimensions of 3.6 m x 0.25m) than that of the radar, but stand out quite clearly in the image. The very bright areas in the image are due to the sun's rays bounced off the highly reflective outer layer which protects the satellite.

"Extract from the image of the Ténéré desert (Niger) with full resolution M+XI (10m by 10m pixels)": 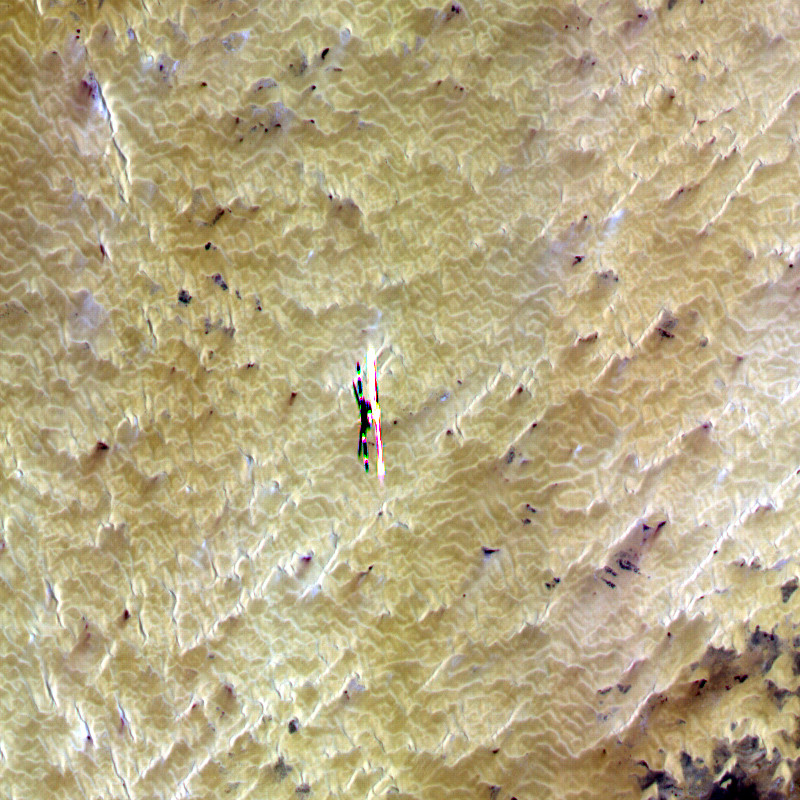 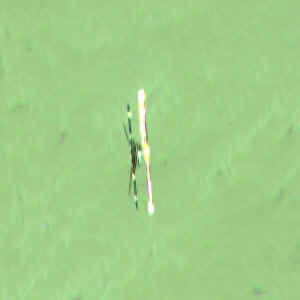 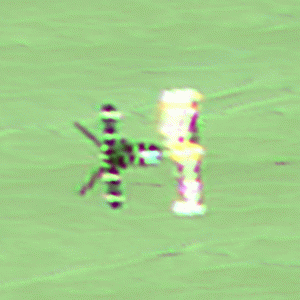 The question Harpooning satellites? Is this really the best way to get them under control? discusses an upcoming mission to try to test "satellite harpooning" as a way to attach to and then pull a dead spacecraft into a lower orbit so that it will reenter the atmosphere.

When searching further about its structure, I found the ESA news article Investigation on Envisat Continues. It discusses "France’s new Pleiades satellite" and its ability to image the spacecraft.

Read further in the BBC's Envisat imaged by sharp-eyed Pleiades.

Here is an example image of Envisat taken by Pleiades, given in the article: 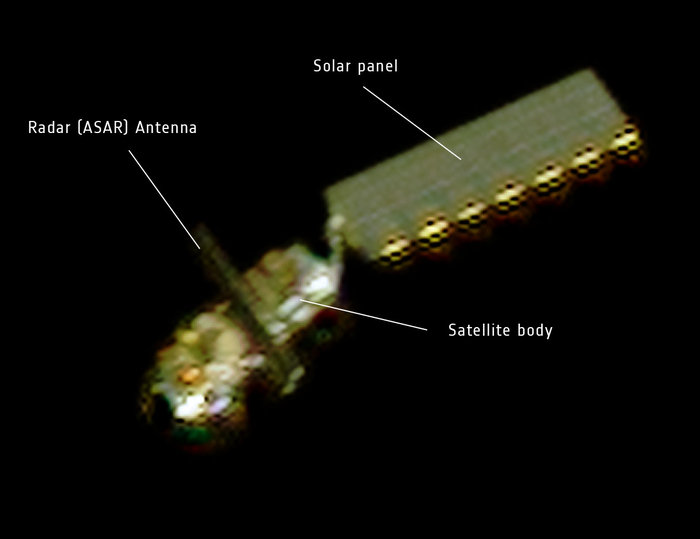 The Pleiades spacecraft is described in detail at eoportal. Here are two images from there: 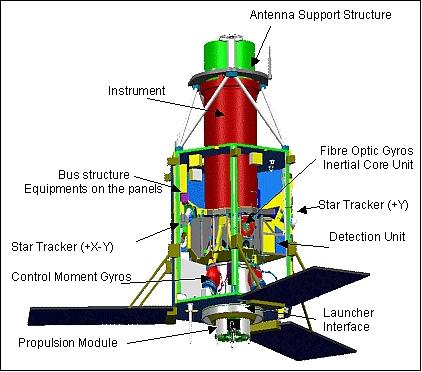 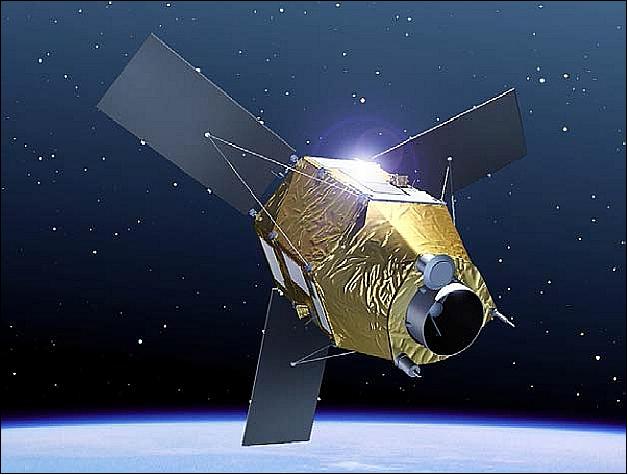 45
Have spacecraft photographed each other beyond Earth orbit?
6
Why is taking a picture of the moon surface from earth possible but taking one of an artificial satellite is difficult?
8
Harpooning satellites? Is this really the best way to get them under control?
4
How a spy satellite eavesdrop on another satellite?
1
"Frankenstein's payload"; Why only four Doves along with the six SkySats?

4
Why is part of this New Horizon's Charon high resolution image missing?
7
Why are spy satellites in elliptical orbits?
7
Blue region in satellite image
5
Can image-stacking allow this 0.25 m satellite telescope achieve 0.65m resolution?
1
How does DigitalGlobe plan to re-image a specific area "as frequently as every 20 to 30 minutes"?
6
Hovering Carbonite! Why do these satellite videos of Earth appear to be made from a geostationary location?
6
Comparison of Lunar Orbiters image resolution after 4 decades?
13
Why is one Starlink satellite not following the adjacent one in this image?
4
How a spy satellite eavesdrop on another satellite?