How many seconds of near-zero gravity are practical with a Reduced Gravity Aircraft?

When I saw "50 seconds of weightlessness" (see quote below) I made a very rough estimate based on 45 degrees nose-up to 45 degrees nose-down Reduced Gravity Flight centered at about 35,000 feet where the speed of sound is about 295 m/s, and an airspeed of mach 0.85 at that altitude:

which gives about 36 seconds.

After watching this incredible video which is also here a sufficient number of times, I read this article which was used as a citation here for technical discussion of the video timing.

The article left me somewhat upside-down and confused, asking myself "How many seconds of near-zero gravity are practical on a Reduced Gravity flight?" as well as "Do they do things like this on the ISS when the cameras are off?"

Kulash: We also came up with a system for doing a single take over eight parabolas. In each flight you have 15 parabolas and in each parabola you have 20 seconds of double gravity, then 50 seconds of weightlessness and few minutes of setting it all up again. So to make it one take, we took eight of these in a row over 40-45 minutes.

Sie: We also we slowed our playback of the song down a bit (28.5 percent, to be exact) and performed each portion of the dance a little slower. This way, the 21 seconds of song fit neatly into the 27 seconds of weightlessness. The pilots — there are 10 OF THEM flying the plane at the same time, by the way — pull out of the parabola when the plane has enough downward speed and momentum in order to "scoop" itself up out of the downward acceleration.

The bold highlight is mine. In the first quote - perhaps the numbers are reversed and it's 50 seconds of >1G and 20 seconds of weightlessness, which would then be more consistent with this article, which also supports the 27 seconds in the second quote.

But maybe I am wrong and somehow the Russian company S7 Airlines (mentioned here ) found a way to go mach 1.2 to get 50 seconds?

So my question: "How many seconds of near-zero gravity are practical on a Reduced Gravity flight?"

I count seven "parabolas" instead of eight, but between 02:00 and 02:31 it looks like partial gravity - not a typical parablola.

Before starting a parabola, G-FORCE ONE flies level to the horizon at an altitude of 24,000 feet. The pilots then begins to pull up, gradually increasing the angle of the aircraft to about 45° to the horizon reaching an altitude of 32,000 feet. During this pull-up, passengers will feel the pull of 1.8 Gs. Next the plane is “pushed over” to create the zero gravity segment of the parabola. For the next 20-30 seconds everything in the plane is weightless. Next a gentle pull-out is started which allows the flyers to stabilize on the aircraft floor. This maneuver is repeated 15 times, each taking about ten miles of airspace to perform.

50 seconds is probably a mistake, you'd need a Concorde or be willing to go to much lower altitudes to get that much.

The '10 pilots' quote is highly suspect too. There's not enough room in the cockpit to fit 10 pilots. There's maybe one observer seat you could use. There's no way the operator would allow anyone to stand in the cockpit during 0 G maneuvers, someone flailing around would be too big a risk for the cockpit instruments.

50 seconds is actually possible but AFIAK there's no commercial jet with the performance to do it.

Every second of zero g produces a downward velocity of 9.8 meters per second. Thus 50 seconds is 490 meters per second. If you were heading up at 245 m/s when you start the zero g maneuver you would be heading down at 245 m/s when you do your pullout. Since this is only about 70% of the speed of sound you can do this while staying subsonic. However, you will have to be going pretty close to vertical at the start of the parabola to keep your plane subsonic--and that means you need a plane that can do a near vertical climb.

Looking at the specs for the Zero G airplane I find it's a 727-200. While I don't know what engines it has the best performance for the class is a thrust to weight ratio of .26 at max takeoff weight, up to .46 completely empty (if you could somehow get it into the sky with no fuel.) That's nowhere near what it would take to make the climb.

The only aircraft I find that can do it are fighters--and they're not limited by having to stay subsonic anyway. You will also use 10,000 feet of altitude on the loop--and if you do the pullout at 2g you'll use another 10,000 doing it.

Supplemental answer time. OK Go! has just released Gravity is just a habit, the "making of" documentary about the original video OK Go - Upside Down & Inside Out. Not surprisingly, it's essentially the same number that is given in the accepted answer.

The new video includes other details about preparing for the series of zero gee periods produced when the Ilyushin Il-76MDK 4-engine turbofan strategic airlifter at the Yuri Gagarin Cosmonaut Training Center in Star City executes a series of parabolic trajectories between 6,000 and 9,000 meters. Both are viewable below the screenshot of the trajectory. 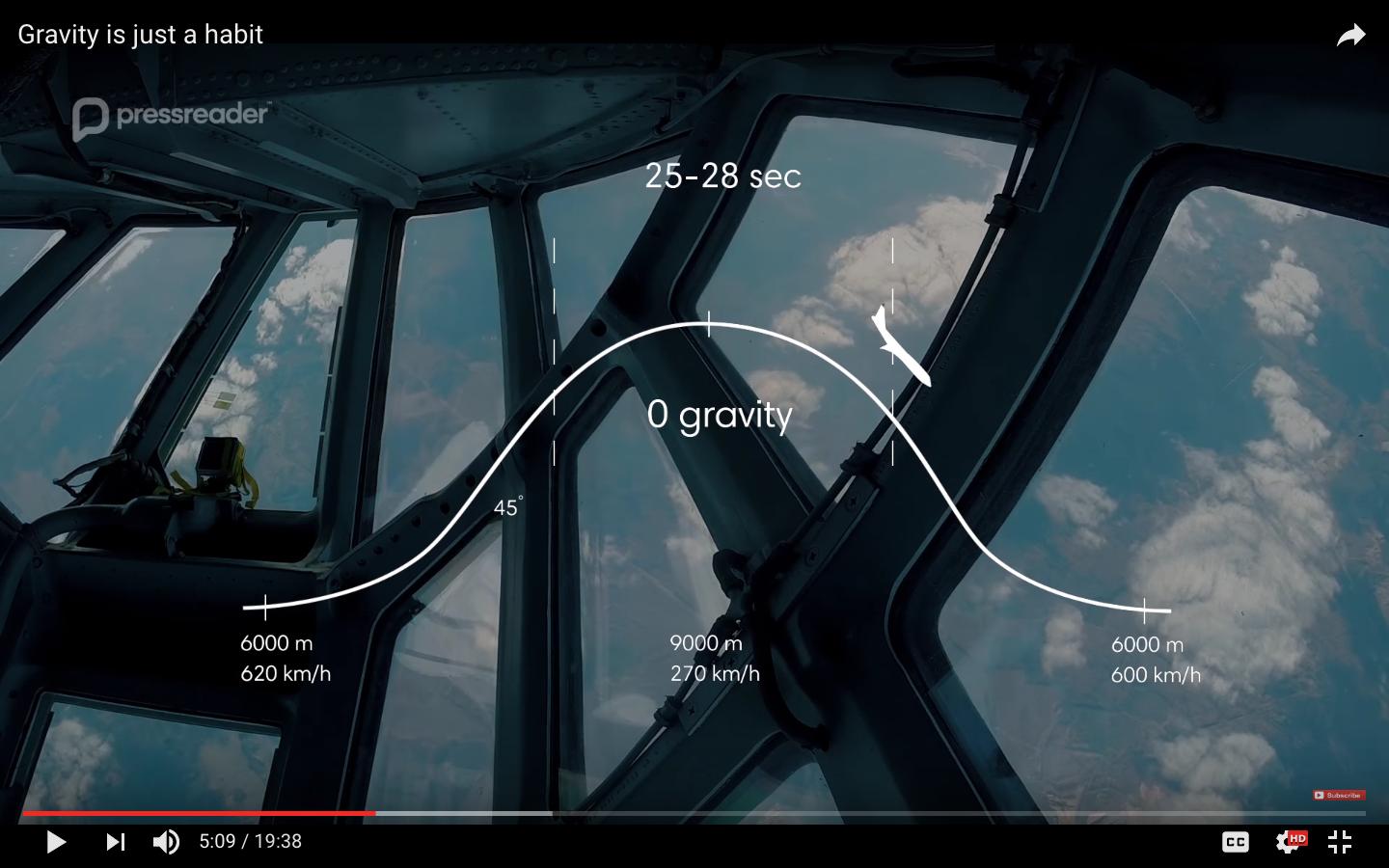 below: The documentary - watch the actual video first (last one) if you haven't seen it already.

below: OK Go - Upside Down & Inside Out (Behind the Scenes) - watch the actual video first (last one) if you haven't seen it already.

below: The actual video - watch this one first if you haven't seen it already. 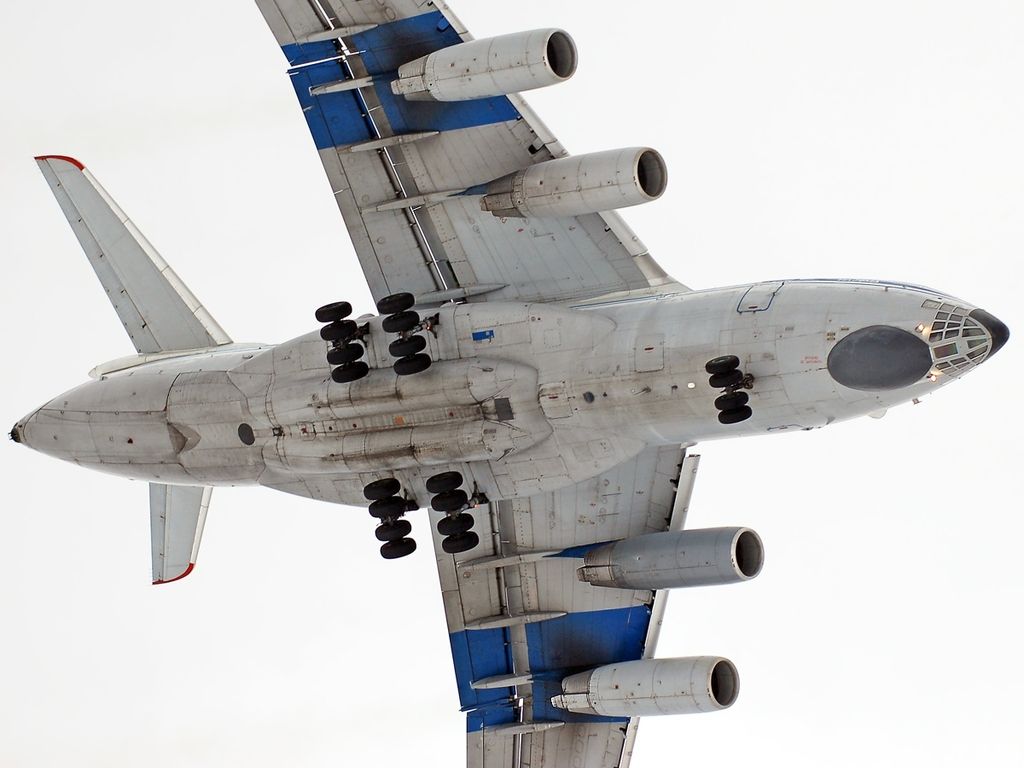 Not the answer you're looking for? Browse other questions tagged microgravity astronauts training or ask your own question.

14
What is the context of this seemingly "zero-gravity" photo on Earth?
3
What does it take for a craft to perform a flight simulating weightlessness without having to fly a steep parabola/ellipse?
6
Could an aircraft ever simulate Martian gravity perpendicular to the aircraft's floor?
7
When was there a dog in ISS's Kibo module?

17
How well would a broken bone heal in zero gravity?
18
How do astronauts battle loss in blood volume in microgravity?
12
How would a zero gravity cat litter box work?
6
How do we create a zero gravity environment on earth?
15
How do they conduct electrolysis in zero gravity?
3
How do reduced gravity aircraft work?
15
How is lower/no gravity simulated on a planet with gravity, without leaving the surface?
5
Do astronauts use their toes to grip with in zero gravity?
3
What does it take for a craft to perform a flight simulating weightlessness without having to fly a steep parabola/ellipse?
0
What are the main impacts on the body of an astronaut exposed to long term zero gravity?