North Korea recently launched Kwangmyongsong-4 but it wasn't entirely successful and is tumbling out of control. I read on a Wired article that “This thing is probably a failed attempt to get higher up, and is going to re-enter soon.” 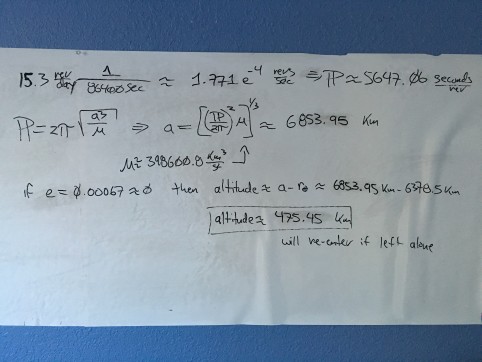 How soon is soon? Does anyone know when this satellite is likely to re-enter?

No one can say for sure, but the appropriate ISO standard can be used to make an estimate:

Figure B5 says that an object in polar orbit with about 500 km perigee (taken from your picture) will reenter in about 25 years. Depending on how much drag it produces, it could be longer.

If you want to put in some effort to get a more precise answer, try UTIAS Review 43. It tells you that at 500 km altitude, the free path length of a molecule is 77km, so it's not so much a gas, but rather some few stray molecules. From this alone, we can see that it won't reenter "soon". To make a calculation, you would need to estimate the area of the surfaces exposed to the orbital direction and the mass. The review specifically talks about spinning satellites. If you can't make a good estimate, you could try to get the orbital parameters as precisely as possible now, and then again in a year and modify the drag coefficient to fit the change. With this you can make a better guess at the orbital lifetime.

If you do this, please tell us what you found! If you post it as a comment, I will include it in the answer.

Here is a simulation to predict the reentry date.

The simulation includes the Newtonian and the relativistic accelerations of all the planets, Sun and Moon.
The Earth's gravity field is modeled with the SGG-UGM-1 gravity model (computed using EGM2008 derived gravity anomaly and GOCE observation data) truncated to the degree and order 15 (to save the running time, while retaining good accuracy when compared to the full model).
For the calculation of the air density, I use the NRLMSISE-00 model along with an updated data file for the solar and geomagnetic indices. The actual indices can be found here: www.celestrak.com/spacedata/SW-All.txt, while the model used for the long term prediction of the indices can be found here: https://www.nasa.gov/msfcsolar.

The first step involves determining the best ballistic coefficient to minimize a particular simulation parameter. After 46 minutes, the program finds a ballistic coefficient of about 118 kg/m^2 (it’s not fixed, because the drag coefficient varies with the air composition).
The following graph shows the result for the two last months: 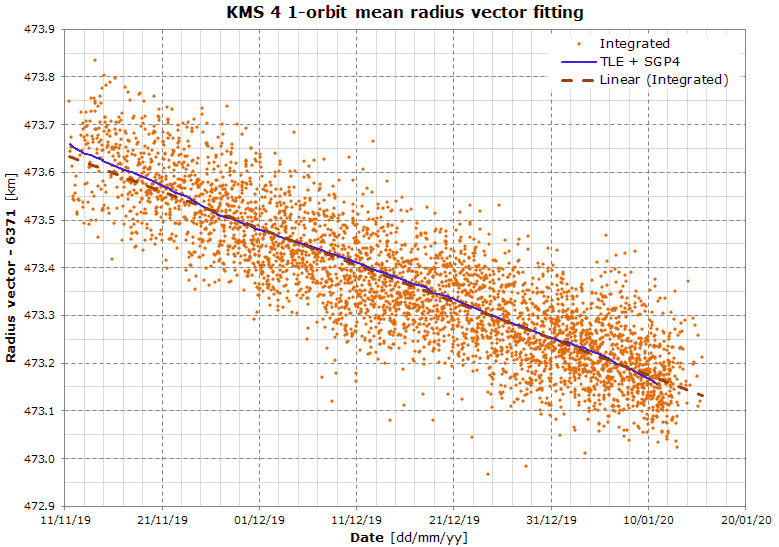 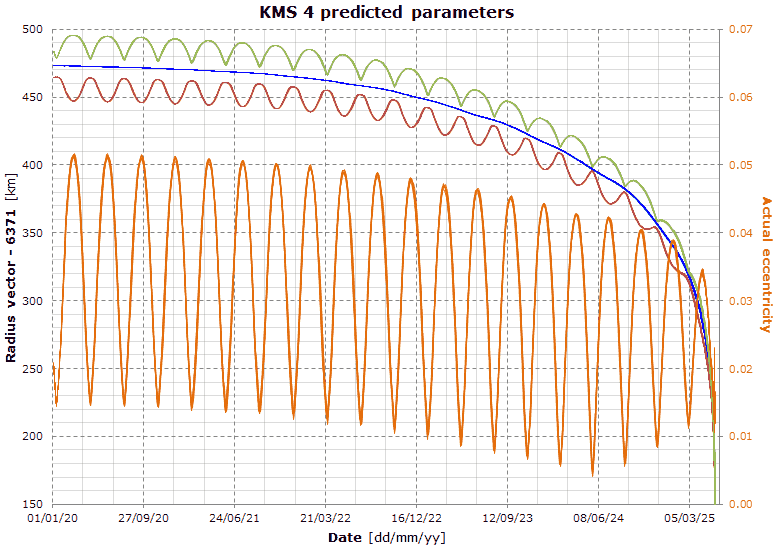 1-orbit minimum radius vector (red plot): the smallest radius vector in one orbit. Not to be confused with the osculating perigee.

1-orbit maximum radius vector (green plot): the biggest radius vector in one orbit. Not to be confused with the osculating apogee.

The average reentry date is 2025-05-20 and the difference between the later and the earlier date is just 3.5 days (which means that the TLEs are very accurate for this satellite). The only unknown is the air density.

The answer Rikki-Tikki-Tavi provided is right, with one small exception. The periapsis, not the apoasis, is the key to using such charts for reentry purposes. The 466 km periapsis should be used. Using the same source, I would estimate the lifetime to be no more than 5 years, 2-3 being more likely. I suspect the satellite was a bit low, it certain was compared to the previous satellite North Korea launched, and would also be consistent with it's tumbling.

Not the answer you're looking for? Browse other questions tagged orbital-mechanics artificial-satellite reentry north-korea or ask your own question.

19
Passive attitude stabilization with magnets - are there studies based on actual flight data?
15
Do we sufficiently understand mechanics of Lagrange point stationkeeping for EML2 rendezvous and assembly?
2
The Tootronaut is ready to enter the Earthtoo atmosphere, will it be twice as hot?
7
How to optimize time of ignition for an on-orbit burn and/or coast phase on ascent?
16
Have spacecraft ever dipped below the Karman line and then safely continued spaceflight?
5
Will SpaceX vehicles orbit Mars before they enter the atmosphere?
4
Mechanics of Sun-Synchronous Orbit & North Korea's KMS-4
2
Could any “Well-Tracked Analyst Object” turn out to be a natural object or even something else?