Would flying westwards on the Moon be more efficient than east?

I understand that flying in either direction on a planet that has an atmosphere doesn't effect flight times, but on a body such as the moon, would it improve flight times?

Yes, your suborbital hop stays fixed in an inertial frame of reference, and the Moon rotate slowly underneath you.

It is not that important though, as the rotation rate of the surface of the Moon is only $4.6m/s$, relatively small compared to the orbital velocity of $1720m/s$

Actually, a similar but even weaker effect exists on Earth too, only eastwards instead. With the same velocity relative to the air, you are then moving at a higher fraction of orbital velocity, and it is then easier to counteract gravity.

The most efficient way of performing a flight on the Moon is a suborbital ellipse, with foci in the centre of the Moon, and directly between the two endpoints: 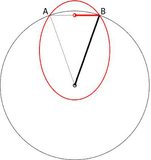 34
Could the Moon keep an atmosphere?
3
Would it be more viable to process moon rocks into Helium-3 on the Moon than doing so on Earth?
4
Could "Asteroid Redirect" make the moon more dangerous for astronauts for a long time?
1
Atmosphere on the Moon
3
Bombing Moon and Mars: What would it look like?
12
Differences in the design of a commercial Moon rover and a commercial Mars rover?
5
Static forces on a rocket engine
9
Why are lunar orbits unstable?
26
Why would such a powerful computer (or a computer at all) be needed to go to the Moon?
6
Would GRAIL be possible on more distant airless bodies such as Mercury and Callisto?