What did they expect to happen with Laika?

Before sending first dog to space, the only animals sent to space were fruit flies. Flies made it back alive, but in case of dog we are talking about a much more complex organism.

What were expectations of scientists working on the project of sending a dog to space? Did they expect Laika to survive until reentry? What effects of space flight did they consider most threatening to dog's life in the situation? Did they perform any (not necessarily humane) experiments to determine the chances of success?

I should probably add extra clarification to my question. I knew Laika had no chance of making it back to Earth and would eventually die, during reentry if not earlier. But since the scientists were willing to risk her for this experiment, I assume they had some doubts whether a dog can survive a spaceflight even until the point of reentry (or they wouldn't do it in the first place, I believe...). So what is it that they expected to threaten Laika's life? Exposure to radiation? Effects of large forces excerted? What did her flight (dis)prove that was in question before? Did they perform any experiments in order to anticipate the outcome before the actual flight? I hope this helps to clear things up a bit and get answers to original question above.

Laika was never expected to make it back alive because the Sputnik 2 capsule it was launched in didn't have any means of deorbiting. From Anatoly Zak's Russian Space Web page on Sputnik-2:

As remembered by Yevgeniy Shabarov, "after placing Laika in the container and before closing the hatch, we kissed her nose and wished her bon voyage, knowing that she would not survive the flight."

Its orbit eventually, in a bit under half a year (November 3, 1957 - April 14, 1958), decayed and the capsule reentered the Earth's atmosphere and most of it if not all would have burnt on reentry. It didn't have a reentry heat shield, no parachutes, and even if it did, the 500 kg something capsule wouldn't be able to keep sufficient life support (breathable air, scrubbing carbon dioxide, food, water, temperature and humidity control) provisions to keep even a small dog alive for such a long time.

Soviets, motivated to some degree also by the public outcry of mostly the Western media and later JFK's protest to Nikita Khrushchev in Vienna in 1961, even though there's documents attesting that such decision to sacrifice Laika for science was difficult to make on its own, nobody enjoyed it, some scientists working on the project publicly declared that science return did not justify her sacrifice, and later made every conceivable effort (and it has to be said they were years ahead at the time compared to US efforts) to equip the following capsules with deorbit motors, heat shield and parachutes, something that had yet to be developed, and they succeeded in returning canine visitors to the outer space back home alive.

Nikita Khrushchev later presented a gift to JFK's daughter Caroline, a puppy named Pushinka (Fluffy) that was one of Stelka's (Arrow) offspring. Strelka and Belka (Whitey) were in 1960 second and third dogs in Earth's orbit.

According to the article on the unveiling of her statue:

All dogs used in the Soviet space program were stray mongrel dogs -- doctors believed they were able to adapt quicker to harsh conditions. All were small so they could fit into the tiny capsules.

The 2-year-old Laika was chosen for the flight just nine days before the launch. 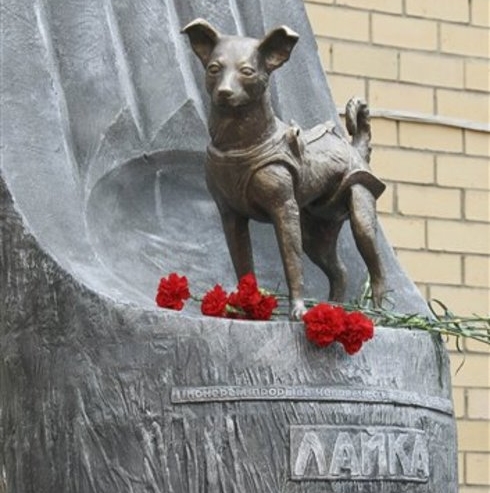 Stories about how she was selected varied: Some said Laika was chosen for her good looks -- a Soviet space pioneer had to be photogenic. Others indicated the top choice for the mission was dropped because doctors took pity on her: Since there was no way to design a re-entry vehicle in time for the launch, the flight meant a certain death.

"Laika was quiet and charming," Dr. Vladimir Yazdovsky wrote in his book chronicling the story of Soviet space medicine. He recalled that before heading to the launch pad, he took the dog home to play with his children. "I wanted to do something nice for her: She had so little time left to live," Yazdovsky said.

The Wiki goes on to say that they intended to euthanize Laika with an injection, but she perished due to the overheating of the capsule hours into the flight.

Not the answer you're looking for? Browse other questions tagged orbit history research animals or ask your own question.

6
Why exactly did Khrushchev present Pushinka to JFK's daughter Caroline?

12
How did they test early spacesuits in a vacuum?
32
Have any animals that have been studied onboard the ISS come back alive?
5
What attitude have past and modern manned spacecraft maintain(ed) relative to Earth?
7
Could Laika have survived the Van Allen radiation during the intended duration of her mission?
2
Does it count as orbital flight if one reentered the atmosphere due to its drag after about 1 revolution?
3
Did Skylab astronauts really "go outside" to look at comet Kohoutek? If so, why?