How would you get precious metals (like platinum, lithium, uranium, etc) from an asteroid safely back to Earth?

First, assume we don't need the metals in space for in-space manufacturing. Second, assume we want to get the metals back safely, and not pound the Earth like a meteoroid. Third, ideally this method could deliver multiple tons of materials safely back to Earth.

Using a heat shield and atmospheric braking is okay.
Using rocket propellant to slow down is fine too.
Semi-hard impacts are okay as long as the materials and containers can handle it.
This needs to be guided, and land in a roughly accurate landing zone.

One possible method is to extract hydrogen from water-rich asteroids, and use that for fuel to slow the descent of a capsule, along with parachutes and a heat shield. But I wonder just how much could be delivered at a time with this method.

Still, I'd like to know what could be a practical method for delivering precious metals (by the ton) from space to Earth.

Asteroidal water as a prerequisite to precious metals

Something to keep in mind is the effect your delta V budget has on your propellent to dry mass fraction. Larger Delta V budgets mean less dry mass that can be devoted to structure, thermal protection, parachutes, and/or wings. 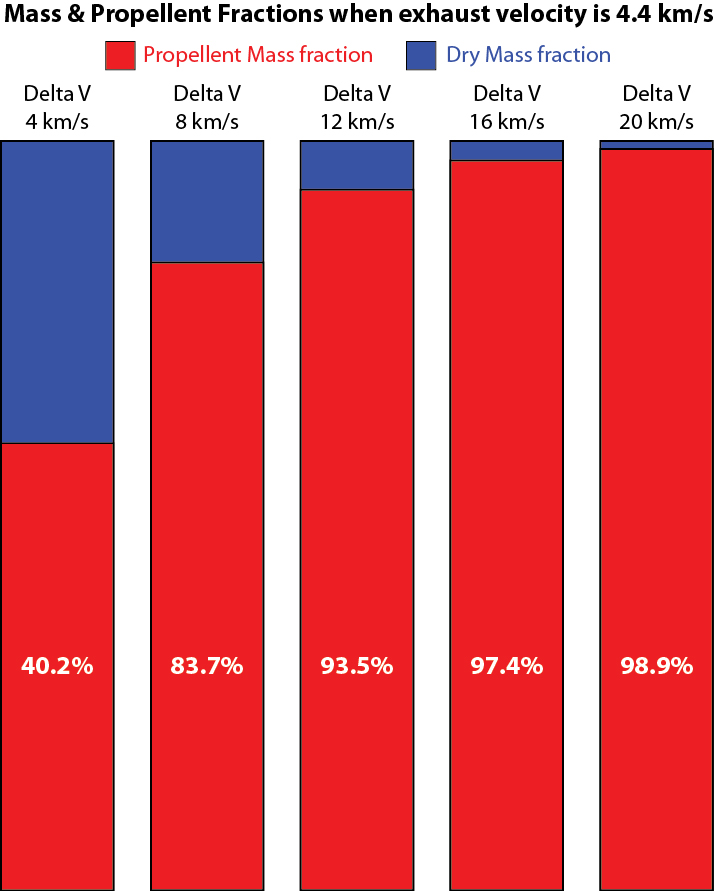 I picked 4.4 km/s exhaust velocity because that's near the best you're going to get with chemical propellent.

It takes about 9 to 10 km/s to get to Low Earth Orbit (LEO). Remember, some of the dry mass fraction must also be payload. So just for getting to LEO, your dry mass is around 4 or 5%. This puts constraints on how robust you can make the structure or how much thermal protection you can add.

On re-entry, the space shuttle would shed around 8 km/s over an hour's time. This would subject it to high temperatures and large dynamic pressure.

For ascent shuttle's Max Q was around 35 kilo pascals. A strong hurricane has a dynamic pressure of around 3 kilo pascals.

These constraints have made it impractical to re-use rockets. The space shuttle did this in limited fashion (although it would throw away dry mass enroute). But maintaining the thermal protection tiles was so labor intensive little if any money was saved.

So water is one of the first commodities Planetary Resources hopes to mine. Given an extra-terrestrial propellent source, it would no longer be necessary to climb in and out of earth's steep gravity well to get the propellent needed for a spacecraft's continued use.

And economic, reusable spacecraft are a prerequisite for mining platinum, gold or any other precious metal. If a space craft is thrown away each trip, I believe even an asteroid made out of pure crack cocaine would be a money pit.

Oxygen is more storable in LEO

Hydrogen and oxygen propellent depots are a problem in low earth orbit. Not only do you have the sun for a heat source, but the earth is a ~300 Kelvin heat source that takes up nearly half the sky. The Multi Layer Insulation (MLI) heat shades would need to be cones that cover most the depot's sky, leaving only a small area to radiate heat into. Also some aerobraking drag passes would probably be used to park the propellent tanker in LEO. For parking in LEO, drag passes can save up to 3.1 km/s but they are time consuming and heat the rocket, two factors that exacerbate cryogenic boil off.

Both oxygen and hydrogen are cryogens, but hydrogen needs to be kept much colder and is harder to make an effective seal against. Oxygen typically accounts for the lion's share of propellent mass is a lot easier to store. So if we get water from asteroids, I'd expect the propellent sent to LEO would be mostly oxygen.

Getting the platinum to earth's surface

So I'm assuming asteroidal propellent in LEO. How much is needed for a soft landing? That is an open question. I'll note that SpaceX looks like they're well on their way to recovering their boosters. But these don't re-enter the atmosphere at 8 km/s as an orbital cargo would.

Besides propellent for reducing energy, it is possible asteroidal stuff could beef up structure and thermal protection thus making the space craft more able to endure re-entry.

Use steam to decelerate and cool the payload. Using the payload to create a tough, hollow container, shaped to be stable on reentry. Fill it with water. Reentry friction heats the water to steam, the resulting high pressure steam is directed out of nozzles positioned to decelerate the payload to a survivable value for impact speed into a body of water. This obviously requires access to enough water ( or other fluid ) to be used as reaction mass. Aluminum might be tough enough to be used as a shell to contain the steam pressure generated during reentry. The water-to-steam phase change inside the vessel cools the vessel. A spin stabilized projectile keeps the working fluid in contact with the hot container walls. Water could be stored as ice spin coated on the inside walls, all you would need to do would be to keep the reentry "bomb" in shadow until it was in position for final descent.

Not the answer you're looking for? Browse other questions tagged landing reentry asteroid mining or ask your own question.

3
Atmospheric entry of asteroid mining products
2
What are the challenges for delivering bulk asteroid commodities to Earth?

4
Are there any techniques of heat shielding an irregularly shaped object?
18
How is it known that asteroid 2011 UW158 has so much platinum?
6
Mining a near-Earth passing asteroid with profit?
2
The Tootronaut is ready to enter the Earthtoo atmosphere, will it be twice as hot?
1
How did fictional asteroid 2019 PDC get its name?
5
What is the closest asteroid to Earth worth mining?