Why did SpaceX choose gas thrusters over reaction wheels/CMGs?

For the Falcon 9R, and the Dragon spacecraft, the use thrusters for attitude adjustments on both the stages returning and to control the rotation of the descending Dragon.

You can see the return stage thrusters at 0:40, for example.

Or perhaps the thrusters are more reliable?

They are good for satellites that stay in the orbit for years, where you can afford hours per maneuver, but need years of operation. Meanwhile, RCS will run out of fuel quite fast, but it can provide a good torque rapidly. With a tight schedule for reentry at the right trajectory, Falcon 9 needs that quick reaction.

Any docking vessels require RCS for translation maneuvers for docking - it certainly does have some reaction wheels besides that, but RCS is still a must.

Let's have a look at the article linked from the Wikipedia page that talks about "a few hundred watts and 100kg of mass... thousands of newton meters of torque"

Let's ballpark the F9 1st stage at the moment of separation - before the most torque-intensive maneuver of turning 180 degrees - as 100 ton.

I don't know how many thousands of newton meters of torque the sentence in Wikipedia meant, but let's generously assume a hundred thousands.

The angular acceleration will then be 0.007rad/s^2.

42 seconds is still doable within time budget of F9 launch.

OTOH, the paper shows the CMG with highest available torque commercially available to be of order of 100Nm, not 100,000Nm. A CMG of 1000Nm (ten times stronger than the top one) will then take 420s to turn the stage around.

Somebody check my math. I have checked the math, shown edits. To turn the first stage around in one minute using a 2 meter diameter steel (or lead or tungsten or depleted uranium) wheel with a mass equal to a typical payload (~5000kg), you'd need to discharge a Tesla model-S Powerwall battery (about 5 kWh) in 10 seconds to spin it up to 1800 180 RPM, then dump the energy back into the battery again a half-minute later to stop it. Assume the first stage has 10% propellants remaining.

We can take a minute to pause and enjoy that image, but the thrusters have one thing going for them.

The nice thing about thrusters is that you can put them at the ends, where you can take advantage of the length of the body (r^2). That "little" 5000kg wheel in the middle is at a distinct disadvantage.

Structural engineers will shudder at the thought of applying the torque to the middle while most of the mass is at the ends - another advantage of having the thrusters at places where the mass is concentrated. 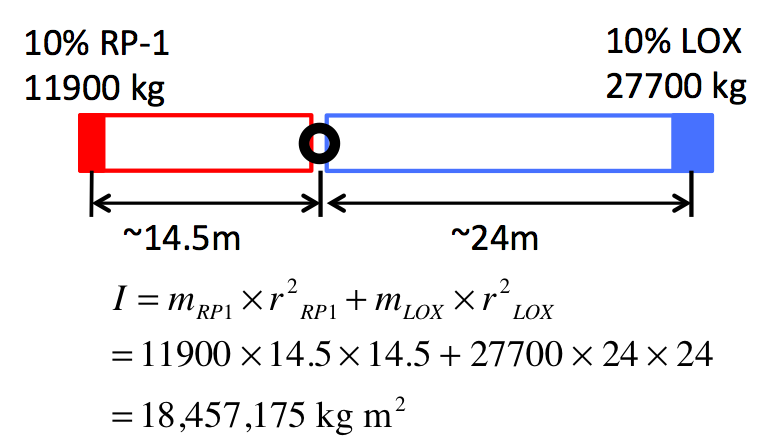 Not the answer you're looking for? Browse other questions tagged spacex falcon-9 reaction-wheel or ask your own question.

14
How is SpaceX going to land their Falcon first stage?
9
Is the Paramagnetism of Liquid Oxygen Ever Considered in Engine or Tank Design?