Has there ever been a go-pro satellite?

Since go-pros are very popular and you see them everywhere, has anyone sent them to space orbiting? Or any plans?

The answer is yes. The NanoAvionics MP42 microsatellite (1) included a GoPro on a boom to take a selfie, as shown below (2) 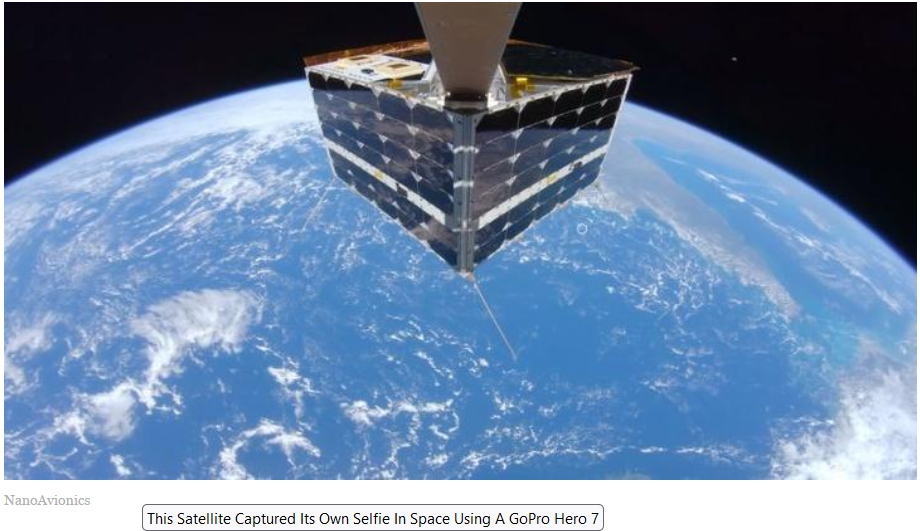 If the intent of the question is, has a GoPro camera itself ever been packaged into a nanosatellite (i.e., 10 kg or less), notably CubeSats, I believe the answer is, no.

A GoPro camera generates video at a bitrate of 25 Mbits/sec or greater. The data typically goes onto an SD card, which is extracted for later playback. For a GoPro to be useful in space, you’d have to either recover the SD card or transmit the data down. Even one second of video is a lot of data to transmit. Data rates pretty low, and there are only a few minutes of downlink time per orbit. Nanosatellites such as STRaND-1, PhoneSat and other CubeSats are very low power. Their ability to transmit is very weak. From what I can tell, STRaND-1 depended on amateur radio, and did either 9.6 or 19.2 Kbits/sec for downlink.

PhoneSat 1.0 was built around a Nexus One smartphone, with virtually no modification to the phone. Subsequent generations have taken the phone apart and repackaged it for flight. (Among other things, the display and outer case are not very useful inside a satellite.) http://www.nasa.gov/phonesat

The technology that is the basis of smartphones and arguably GoPro is being tested and flown by Planet Labs. They take images of the Earth, but these are not videos. http://www.planet.com

Planet Labs has launched on the order of 100 3U CubeSats into space. These may be launched directly off a rocket; or flown first to the International Space Station, and then launched weeks or months later.

I attended a Planet Labs technical presentation a couple of years ago; the engineer was asked what sort of optics were used. They basically used a small, but good quality telescope. However, I could imagine (no pun intended) the imaging element being the same kind of CCD or CMOS camera sensor used in GoPro or smartphones.

Not the answer you're looking for? Browse other questions tagged artificial-satellite camera or ask your own question.

2
Do Phonesats and GoPros work with their internal batteries in space vacuum?
3
What are the sounds in this GoPro-in-orbit ISS video?
1
What are some objective that CubeSat's can complete/have completed?

13
Satellite tracking software
4
Has anyone seen an actual spectrum of a satellite made by an amateur photographer?
16
Two week mark; has Mayak (Маяк) been spotted yet? Reflector deployed? Astronomy "ruined"?
3
Has a TLE ever been issued for a spacecraft trajectory not bound to Earth orbit?
8
Have there been any probes launched that were actually clusters of probes?
6
Can I obtain the audio of president Eisenhowers message coming to me from a satellite circling in outer space?
4
What was the first use of analog to digital conversion in a satellite?
12
What ever happened to 6Q0B44E - potentially the "artificial satellite (with) the farthest orbit around the Earth"?
2
Telemetry: How do we manage to get a message to a tiny satellite that may be millions of kilometers away?