SpaceX first stage landing: Why not use an elevated net above the landing platform to catch the rocket?

The rocket would keep same descent system as now (no parachute). But instead of landing on feet, it would have long grid fins on its top that would be caught by an elevated cable net.

The previous SpaceX attempts showed that the landing position is very precise, but that it's hard to land slowly and stable enough to avoid falling on its side or break a leg. This solution objective would solve this issue, plus reduce the rocket weight.

The global idea is to transfer as much as possible the landing system (and its weight) from the rocket to the ground. 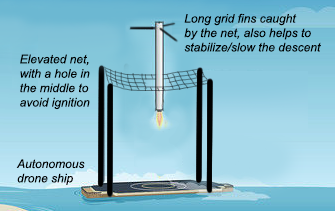 So, surely there must be flaws and issues with this idea... waiting for your opinion and ideas!

EDIT: Top-view of the net below. Metal structure would be 50m wide (same as the current landing platform), the net hole 15m in diameter, and top legs 15m length, so it cannot fall through the hole nor be in contact with the solid structure. 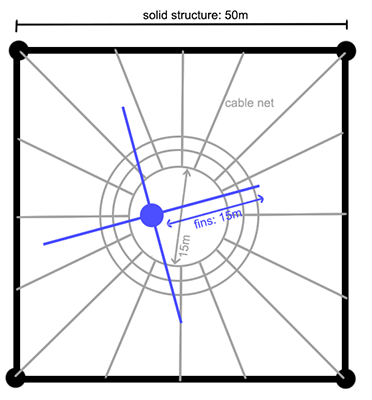 About some very interesting issues reported in the replies:

Edit 2: added a paragraph about what happens after the landing (see at the bottom)

So I've got a pile of arguments against this scheme, but this is the big one:

You've made the legs twice as long (the real ones are about 7 m), which means they're at least twice as heavy. Probably more, since the load will be applied further out so the legs need to be stronger. So far from saving weight, you've just added several tons to the empty weight of the stage.

The legs are at the bottom of the stage, conveniently located where the stage already has to be strongest to withstand the loads from the engines. The bottom hinges are attached to the Octaweb engine frame. The top hinge has a compression load, which is easy enough to engineer for (a band of thicker skin is enough). Due to the leg geometry, the load is spread between the bottom and top hinges.

The top of the stage is made to support weight in the vertical direction, not to support large horizontal loads.

You still have the failure mode of 'a leg breaks after landing' or 'a leg fails to lock into position', because you're using a very similar mechanism.

The hydraulic cylinders are still there: this time they're not pushing against the wind, they're preventing the wind from snapping the legs back violently. Longer legs = greater aerodynamic forces, so again more weight to prevent stuff from breaking.

A net is inherently less resistant to the rocket's flames than a slab of asphalt on top of a slab of steel. The net also creates point loads where a cable meets the landing leg. As the rocket settles in the net, it will tend to move around. The leg will slide over the cables, which will abrade the legs (steel cable is a decent saw blade).

The barge moves in the water, rocking on the waves. Any movement is amplified by the height of the poles that hold up the net: a few degrees of tilt ends up putting the poles several m out of place. This makes the hole a moving target that's much harder to hit than the barge itself.

The hoverslam maneuver aims to get the rocket's vertical speed to 0 at the moment of touchdown. Catching the rocket while it still has some vertical speed increases the loads on the rocket. So you have to make the legs stronger and heavier again.

When the stage uses its main engine to maneuver, the engine gimbals, spewing a ten-meter column of flame in a large off-vertical angle.

It's possible to build a platform that's not affected by wave motion. You can add a large underwater structure that provides the buoyancy. Offshore drilling rigs are sometimes built like this. This would make the barge far less mobile, and 10x heavier (=10x more expensive) than it is now.

To get flexibility in the landing, it'd be easier to replace the current leg design with one that doesn't lock, and adds some shock absorption to the hydraulic system. This requires more complex, heavier hydraulics though.

And another thing: what happens after the landing? In the current design, the crew (presumably) comes aboard and welds some clamps over the legs to secure the rocket for the return voyage. Simple.
In your scenario, the rocket's dangling from a net. It'll have to be secured, and pretty quick, or it'll bang into something and be destroyed. You can't lower it vertically (no legs at the bottom), so you'll have to devise a complex mechanism to set it down horizontally on a cradle.

Issue #1: the rocket body is really thin (like a soda can) and the smallest force in the direction the net would apply would probably dent it.

Issue #2: there was never a problem with stability which would need solving with some extra contraptions. It was:

The first 3 just needed fixing the specific problem and the 4th attempt was a test of upper limits anyway.

Issue #3: the net and surrounding structures would have to withstand rocket exhausts of 1 or even 3 (supposedly in the 4th attempt) engines.

Issue #4: SpaceX is training for Mars and you won't have such benefits there.

You're using way too high speeds to make it feasible, similar to a water landing (you could say, why not "dive" into the water). At the speeds a rocket touches down, if not heavily controlled, hitting a net is equal to hitting the ground/water surface.

So the landing legs (which anchor to the net) need to withstand the full force, AND dissipate all kinetic energy, without creating a high momentum.

A high yield strength, highly ductile material (low Young's modulus) that can be created of large enough size simply does not exist yet. Sure, theoretical materials such as graphene might prove useful in the future, but if you allow that, why not make the whole rocket from that material?

Now there is also an actual drawback to using a net compared to a landing on land such as the Soyuz do. (This is similar to why water landings are so much harder to both air and spacecraft). Land is well defined structure, you know its shape and it's (probably) nicely flat. A net (and sea) are not that way, they deform (waves) and are nearly never flat. This effect is, in a net, exaggerated by the workings of netted structures: you never land perfectly, so one part of the rocket will touch the net first, this creates a wave which will actually create an upward force at other parts that are landing.

There is one key reasons why SpaceX will not do this and that is cost. They already have an acceptable landing procedure and the intention is to eventually phase out Falcon 9 launches in favour of Starship.

So there is little incentive to pay for relatively complex catching mechanisms on three drone ships and perhaps lose a booster or two while testing it out.

But SpaceX will (eventually) use some form of catching mechanism for the Starship booster Superheavy.

Not the answer you're looking for? Browse other questions tagged spacex falcon-9 landing reuse first-stage or ask your own question.

-1
Is there some reason why ORBs don't land in a cylindrical cage?
7
Why not land booster stages in a cone or net?
1
Why SpaceX want to land the rocket on the ground?

67
Why would SpaceX not use parachutes for the final descent of the first stage?
6
How can Falcon 9 first stage land vertical in a strong wind?
9
Did CRS-6 landing fail because the steering fins are ineffective at low speed?
9
Why doesn't the Falcon 9 booster use rigid air brakes during landing attempts?
10
How does the Falcon 9 first stage land on the moving surface of the barge?
11
Is SpaceX grid fin material flammable?
4
Could SpaceX's grid fins be controlled by electric motors instead of hydraulics?
5
Will the New Glenn have grid fins? Why or why not?
8
How much of the recovery system does Spacex remove from a Falcon 9 when using it in an expended manner?
1
Could Falcon 9 be Caught by the Orbital Launch Tower?