Instead of placing many magnetic satellites close to Mars to artificially generate a magnetic field to protect Martian colonists from harming radiation, we could place a magnetic satellite at Lagrangian point L1. The magnetic field does not need to be as strong to deflect the solar wind enough, since the deflection takes place over millions of km before reaching the planet. What would this require to be practical?

This answers the question on how to block ions coming directly from the Sun from hitting Mars by a satellite stationed at L1. It does not cover the fact whether such a shield is effective in reducing the radiation level on Mars surface. See e.g. here for more details on radiation.

First, let's have a look at the magnetic field needed. Inside a magnetic field (gray area), the particles follow a circular trajectory (green). The radius depends on magnetic field strength and particle momentum while the total deflection angle also depends on the length of the field. 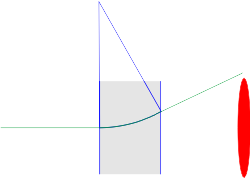 Sounds simple enough? Let's have a look at pure geometry. In the drawing all values are given in thousands of kilometers - not to scale for obvious reasons.

Sun (yellow) diameter is about 1.4 million kilometer and we need to fully cover it. A shield (blue) positioned 1 million kilometers from Mars (red) that covers the sun completely has a diameter of: $$R = \frac{R_{sun}d_{L1}}{d_{sun}} = 6100~\rm{km} $$ But, we want to cover the whole surface of Mars (green shield), so we need to add another 3000 km in each direction, yielding a total diameter of 12000 km. That is equivalent to build a ring around the equator of Earth!

Unfortunately it is not enough to build a single coil with this diameter - the magnetic field needs to be perpendicular to the solar wind and the intended direction of deflection. That is, pointing away from the viewer, into the screen.

A single coil of reasonable size is not able to produce such a field that extends over thousands of kilometers along the axis of the coil. A simple way to provide it would be a pair of Helmholtz coils (orange). Again assuming a diameter of 12000 km (which is already beyond the validity of simple formulas as the distance between the two coils needs to be smaller than their diameter) and a strand of copper with a cross-section of 1 square meter, the whole setup would need a reasonable 10 MW of power but weigh about a billion tons, or in other words, the world-wide copper production of 50 years launched to space.

Note that it is not strictly necessary to use a cross-section of 1 square meter. We can always trade mass versus power needed due to increased resistance of a thinner copper "wire": Half the cross-section requires double the power.

The very idea was proposed earlier this month at the Planetary Science Vision 2050 Workshop.

They combined heliophysics simulation tools with a Mars global climate model to do the simulation. Their abstract suggests placing a 1-2 Tesla dipole at L1 is indeed sufficient to protect and rebuild a Martian atmosphere. However, the scale is not indicated. The full talk specifies 50,000nT measured at one Earth-radius--which is comparable to regenerating Earth's magnetic field and clearly a challenge.

Few details were given on how to generate the artificial magnetosphere field, but in was noted that the field lines must remain parallel with the interplanetary field to function well as a shield. 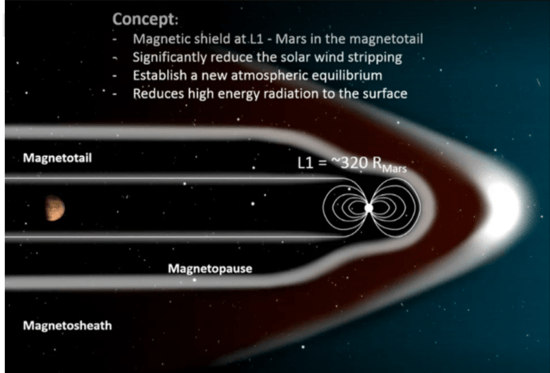 It is not necessary for the artificial magnetosphere to block the radiation. It is sufficient to merely deflect the ions by 0.006 radians in any direction. Maybe 0.01 radians to be safe. The L1 point is a million km from Mars, and Mars has a diameter of 6000 km.

This is a much smaller field than would be required to enclose Mars in a magnetotail.

Perhaps worth considering building one of these for Earth L1 too. A shame to destroy the Northern Lights, but then we don't want to lose our power grid. Maybe spin it up on demand when a storm is detected.

Not the answer you're looking for? Browse other questions tagged mars magnetic-field terraforming solar-wind or ask your own question.

16
Highest number of satellites launched on a single rocket
17
What is the largest number of identical satellites launched together?
18
Is Mars' gravity strong enough to hold a human-breathable atmosphere?
9
Is NASA doing research on "mini-magnetospheres" to protect crew from radiation in space?
7
What are the effects of orbital reflectors and advertising on scientific observation?
4
Sources of radiation on Mars
3
Artificial Magnetosphere to Terra-form Mars?
1
What Earth satellite remained in orbit the longest before reentering?
2
Spinning 16 Psyche at Mars L1 to envelop Mars with a magnetosheath?
3
Artificial magnetic shielding for Mars feasible?
See more linked questions

10
What is the projected death-rate displacement for colonists to Mars?
7
Magnetic / Inductive braking against planetary magnetic fields?
20
Is a magnetic field really needed to terraform Mars?
0
Could a spacecraft be propelled by the deflection of a very high number of charged particles?
13
Mars versus the poles of Mercury WRT colonization
5
Terraforming Mars using a combination of aerogel and GM microbes?
6
How long would a magnetic shield placed at the Mars L1 point take to replenish Mars's atmosphere?