Sources of radiation on Mars

This question proposes building a satellite to deflect solar ionizing radiation from Mars. But there are two sources of radiation: the sun and 'everything else' (cosmic radiation). How much radiation can you expect from these sources in orbit around Mars?

Does a shield that removes solar radiation alone (1), result in a survivable environment, either in orbit or on Mars' surface?

1: not just the satellite from the linked question. You could build a ship that has a thick shield in the sun-facing direction only, for example.

Galactic cosmic rays (GCRs) provide a steady background radiation that poses health risks to humans on the year time scale. That is, over a year with typical spacecraft shielding you will get on the order of the total lifetime dose allowed in Earth occupations. Not really a big deal at all, seeing as how you are on a once-in-a-lifetime adventure of epic proportions.

Solar proton events (SPEs) on the other hand are episodic and huge, ranging up to 100,000 times the flux of the GCRs, with each lasting on the order of days. They are directional and not all that common. But with a little bad luck, they can kill you. We were somewhat fortunate that none of the Apollo missions saw any major solar proton events. It helped of course that the missions only lasted a week or two.

While flying the Mars Exploration rovers to Mars, we experienced such an event around Halloween of 2003. It resulted from one of the largest solar flares ever observed. The spacecraft survived, since they were designed for that (unlike humans), but the radiation took out our star scanners for about two weeks. The star scanners were seeing thousands of stars that weren't stars, preventing them from recognizing star field patterns. So no turns or maneuvers were possible during that time. Several FPGAs also were taken out of service due to single-event upsets, but we were able to reset those to restore their operation. Here is a plot of the event as seen by the GOES 11 satellite at Earth at the time: 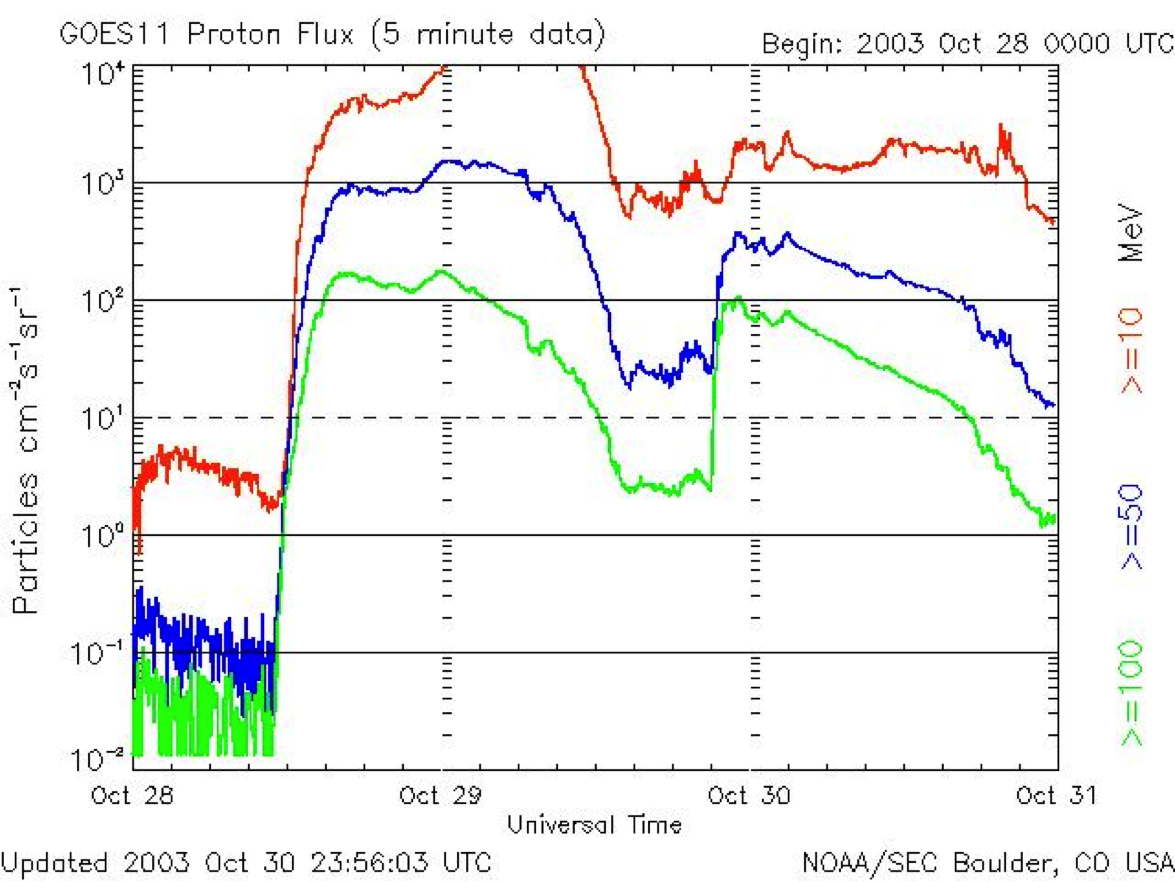 Note that the vertical scale is logarithmic, showing about 10,000 times the background during the event.

At your location, the SPE protons are essentially omnidirectional, so you can't just shield on one side. The directionality is on the order of 10%, so no help there.

Not the answer you're looking for? Browse other questions tagged mars radiation health or ask your own question.

17
Place a satellite at Sun-Mars L1 to shield Mars from Sun radiation
10
Would a nuclear propelled spaceship still need a storm shelter?
10
Would working at night on the surface of Mars/Luna protect from radiation?

1
Radiation levels around Mars
9
Is NASA doing research on "mini-magnetospheres" to protect crew from radiation in space?
37
Why can't we use the same radiation shielding in Mars that we used when going to the moon?
5
Transparent radiation shielding for martian surface bases
5
Did the Apollo missions use the Earth's magnetotail to lessen cosmic radiation?
22
How much UV radiation will Mars inhabitants receive?