What is the "airbag" on the roof of the Mars rover in 'The Martian'?

When I was watching The Martian I really couldn't make a clue of this thing. And sadly all in the film that was stated about it (at least in the language version I watched) was, because they thought it would be a nice idea to drill a hole in his roof. But that's all and there was nothing else stated after that about it anymore.

Here is a picture of the thingy I'm talking about: 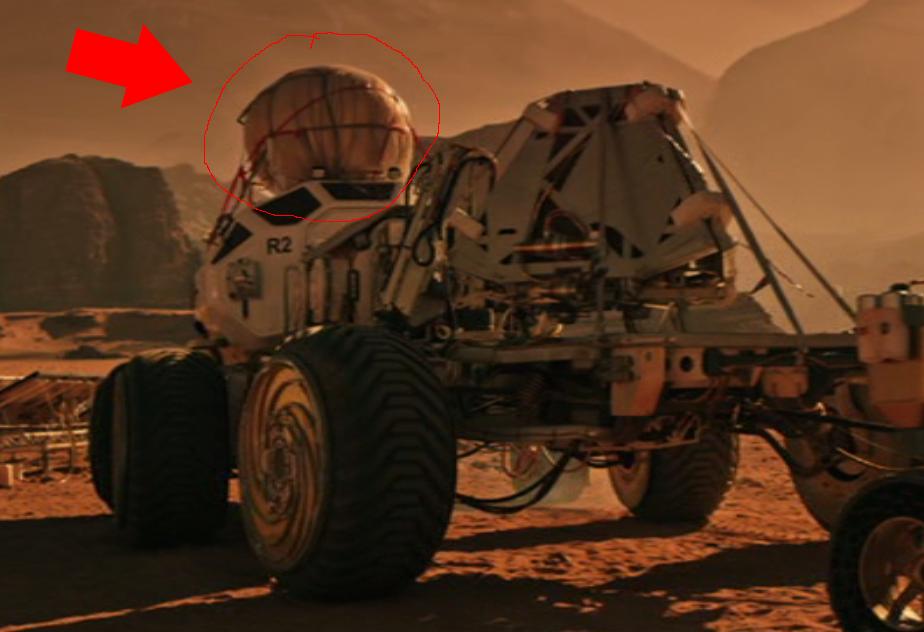 So earlier problems that had not been mentioned how to be solved:

Or is it just solving a problem I didn't even notice coming up? I dare to doubt they didn't do it just because they thought it would be fancy.

If this isn't somehow on topic here, please be so kind to migrate it to movies SE.

But I assumed even it is based on a film this is probably better fitting here.

I don't remember if it was mentioned in the film but the main problem was that all the equipment he needed to bring for life support did not fit into the rover. So he needed more space and had to modify the rover (cut open the roof) to fit all the equipment. But he also needs the rover to be airtight (the equipment is the primary means of scrubbing CO2 and generating oxygen after all) so he had to plug the hole with HAB canvas material.

The book explains the issue. The cab of the rover was too small for the duration of his trip. He wanted a 'spare room' that he could inflate while waiting for charging to complete.

There is a subplot not handled in the movie where he shorts out the Pathfinder rover by leaning the drill he was using against the cab, with an exposed wire. Then how he recovers from the loss of communication.

In the book, he tows the second rover (IIRC, the second rover isn't in the film) behind the first. There's not enough space inside the second rover for the Hab life support equipment pieces (can't recall the technical names) that reclaimed oxygen from carbon dioxide, regulated oxygen levels, and reclaimed water that he had to bring with him. All of these needed to be inside the pressurized space. At least one of them was too tall to fit inside, so he had to make a "balloon" with "canvas" (not the flimsy Hefty garbage bags you see in the film, but flexible multilayered carbon-fiber composite). The two rovers share power and atmosphere through an umbilical, so he can breathe fine even through the life support is in the trailer.

Not the answer you're looking for? Browse other questions tagged mars air-bag or ask your own question.

17
What are the disadvantages of parachute+airbag for atmospheric landing, versus rocket-based?
59
Curiosity: Why did they "reinvent the wheel" instead of using pressure tires?
37
Why can't we use the same radiation shielding in Mars that we used when going to the moon?
1
What will the US send to Mars as mentioned in this statement to the press?
46
Why is an airbag landing on the moon not viable?
2
What were Mars 2's conical aerodynamic braking shield and "gunpowder" engines?