If we could send an orbiter to the Pluto-Charon system, could we put it in a stable orbit?

The barycenter of Pluto and Charon is in space between the two bodies, close to Pluto. It is the center point of the animation below. The image is roughly to scale. Note that the two bodies are mutually tidally locked, with the same sides always facing each other.

Pluto has a surface gravity of 0.62 m/s2 and a mean radius of 1,187 km. The atmosphere of Pluto, though very thin, is also an issue over time. At the surface it is 1 Pa, 0.001% the pressure of Earth's atmosphere (right now, while it is close to the sun). Above the bottom layer of the atmosphere, its scale height is estimated at 50 to 60 km.

Would it be difficult to put an orbiter in a stable orbit around Pluto? Or around Charon? What kind of station-keeping might be involved?

Let us try to see what happens if we place the satellite in an orbit with and altitude of about 320 km over Pluto, so we get above most of the atmosphere, and get a nice round number for the orbital radius at 1500 km. Let us also normalize Pluto's gravitational acceleration on the satellite to "1".

That does not say a lot about stability, but:

Let us compare that to a system we are more familiar with. What orbital radius has a satellite in the Earth-Moon system with a similarly large range? That happens to be at around 87000 km. That is about twice as high as GEO. Given the very low impact of the Moon on GEO satellites, I would expect that to be pretty stable. Same so for the low Pluto orbit.

I don't know if New Horizons looked or not, but if you wanted to put something there in the system that would remain stable for a while, this three-body orbit will last quite a while. To that end I've just asked Did New Horizons look for "sailboats" in the Pluto-Charon system's sailboat region? Did it pass through it or avoid it?

Giuliatti Winter et al. found several stable regions for a sample of test particles located between the orbits of Pluto and Charon. One peculiar stable region in the space of the initial orbital elements is located at a = (0.5d, 0.7d) and e = (0.2, 0.9), where a and e are the initial semimajor axis and eccentricity of the particles, respectively, and d is the Pluto–Charon distance. This peculiar region (hereafter called the sailboat region) is associated with a family of periodic orbits derived from the planar, circular, restricted three-body problem (Pluto–Charon–particle). In this work, we study the origin of this stable region by analysing the evolution of such family of periodic orbits. We show that they are not in resonances with Charon. The period of the periodic orbit varies along the family, decreasing with the increase of the Jacobi constant. We also explore the extent of the sailboat region by adopting different initial values of the orbital inclination (I) and argument of the pericentre (ω) of the particles. The sailboat region is present for I = [0°, 90°] and for two intervals of ω, ω = [−10°, 10°] and (160°, 200°). A crude estimative of the size of the hypothetical bodies located at the sailboat region can be derived by computing the tidal damping in their eccentricities. If we neglect the orbital evolution of Pluto and Charon, the time-scale for circularization of their orbits is longer than the age of the Solar system for bodies smaller than 500 m in radius. 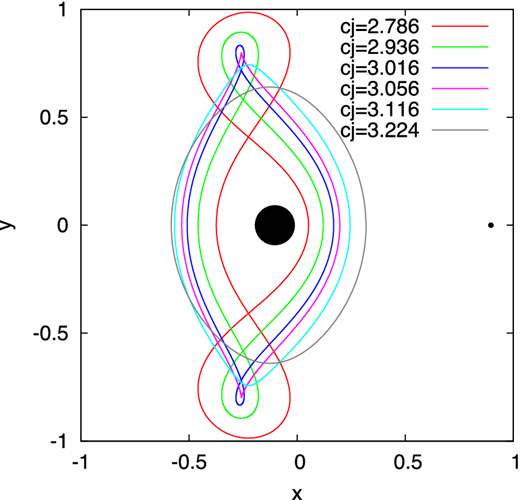 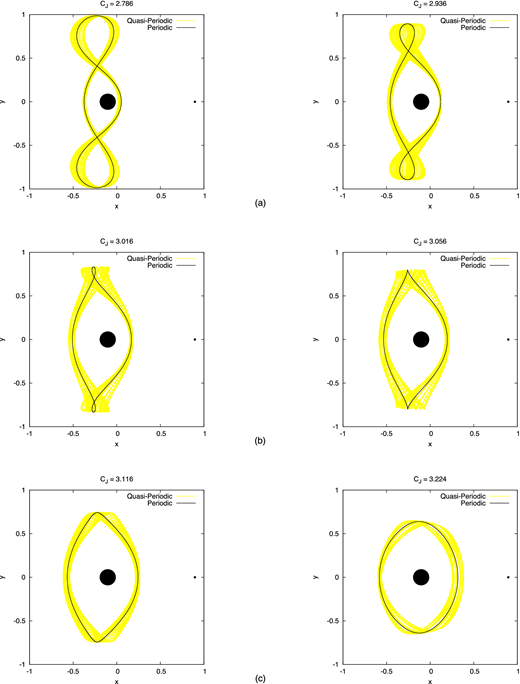 2
Did New Horizons look for "sailboats" in the Pluto-Charon system's sailboat region? Did it pass through it or avoid it?

11
At which point would two GSO/GEO satellites with similar orbital elements be closest to each other?
8
Can New Horizons be turned into an orbiter for the Pluto system?
16
New Horizons - How much time will we get to image the Pluto system?
4
Do New Horizons Pluto flyby results justify an advanced orbiter mission to the Pluto-Charon system?
19
Would my weight be constant on Pluto?
6
How was the radius of Venus measured so accurately (± 3 km) via radar in the mid 1960's, before Venera 4 and Mariner 5?
4
What will happen to a spacecraft if it cancels its galactic velocity?
12
How "locked" are Pluto and Charon? How much does each librate as seen from the other?
4
Can mascons have Lagrange-like points? In principle? At the Moon?