I was recently reading a very good sci-fi story recounting, in loving detail and with a good deal of accuracy, the first space program of an alien race, with strong (intentional) similarities to the American and Soviet endeavors. One thing caught my attention, though: a capsule in distress vented extra $O_2$ in order to spin-stabilize itself in preparation for extremely-manual retro-rocket activation (which was expected to be much less precise than normal, as the retro-rockets had to be activated with a jury-rigged flare gun). But as far as I could tell, the $O_2$ system had not been designed for the purpose, so presumably had only a single vent (rather than two deliberately placed to create spinning, which would be very strange, or two placed to cancel thrust, which would not have been useful). Would a continuous vent over some time actually create a proper spin and create a stable attitude, or would it instead just spiral outward and become uncontrollable?

The short answer is "maybe, if they were spectacularly lucky, but it's a story, so that's OK."

There is quite a lot buried in the question in terms of assumptions, but here's a go.

I have a dim recollection from college (a long time ago) of being taught that an early US unmanned mission actually suffered from precisely the last problem because it had whip-aerials and it was not foreseen that this would cause the pencil-shaped upper stage to become unstable.

See SF and Uhoh's answers for one extra constraint I missed, viz. relationship of the created spin to the axis along which the motor is mounted. My points above about measuring angles etc addressed the also vital but distinct concept of the orientation of the spin to the desired thrust vector in inertial space.

Here is the related answer to a question on spin stabilisation - the one that I refer to above regarding "the unmanned US mission" Why does spinning help stabilisation - Explorer 1 I wrote that in 2017 long after I'd forgotten that I wrote this answer (originally in 2016).

The thrust vector must be in the plane perpendicular to the spin axis and passing through the center of gravity of the rocket.

And of course oriented opposite to the spin direction.

In this picture, the spin axis goes lengthwise through the rocket, so a thruster located at the height of the center of mass of the rocket will work. 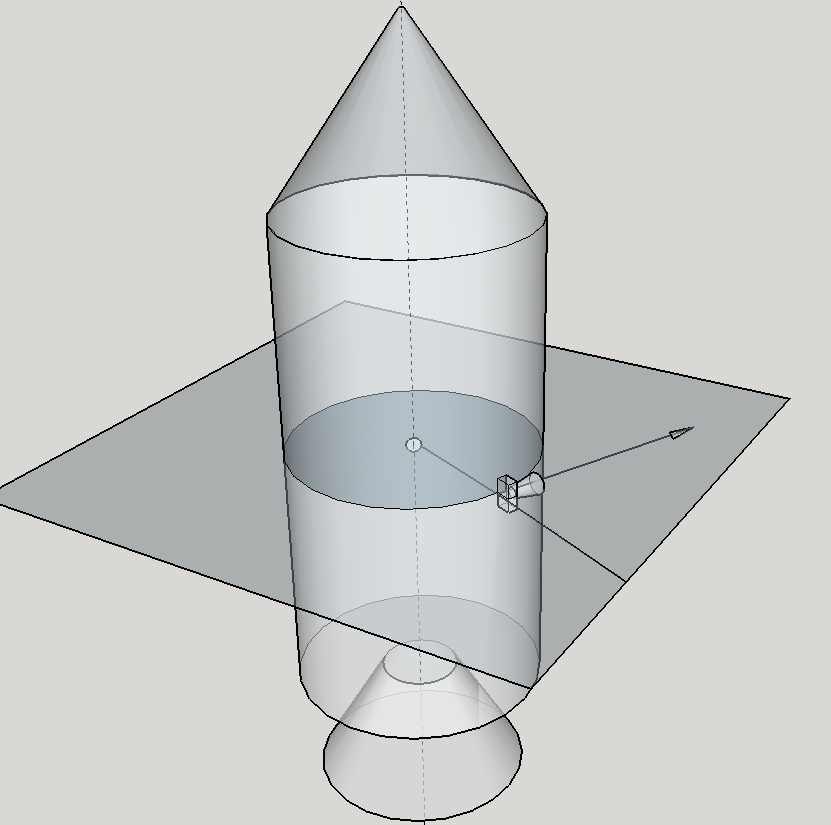 It doesn't need to be tangent to the rocket surface (though it will be most efficient if it is), but if the thrust vector is either pointing off the plane surface, or not attached to the plane surface, the rocket, while losing its original spin, will begin entering a new spin, with its plane of rotation passing through the center of mass and containing the thrust vector.

Yes, it will introduce some translational motion too, but it will be quite minimal comparing to what you normally face with orbital motion - nothing to worry about. That would be an issue when docking, but with one thruster you're definitely not docking on your own anyway.

Luckily their capsule was not space-station-shaped! 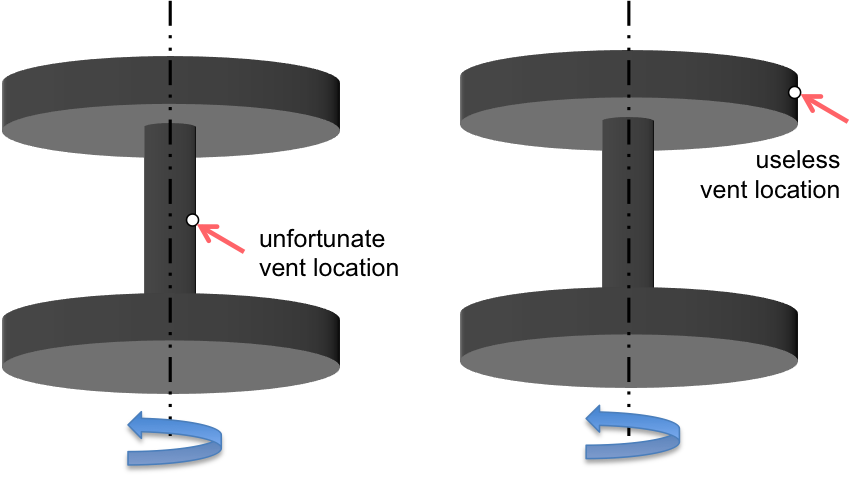 @SF.'s answer points out that the vent needs to be on the plane containing the center of mass to avoid adding spin about a different axis. If the vent is ON the station, it better not be narrow at that point!

If a single thruster really stabilizes attitude finally, it would be a big waste of RCS fuel. Using three pairs of thrusters at the optimal points of the spaceship would require much less fuel.

8
Why does spinning help stabilisation?
13
What is the minimum number of RCS thrusters capable of stabilizing a satellite against an arbitrary rotation?

5
How does New Horizons control its attitude?
13
How does a single SRB control attitude?