Does the temperature near the surface of the Moon rise rather quickly with depth?

I have heard presentations on lunar lava tubes that estimated the temperatures of the ground surrounding them as being well below zero. An article in NASA Science News says this:

Once you get down to 2 meters under the surface of the Moon, the temperature remains fairly constant, probably around -30 to -40 degrees C.

But this graph of measurements taken on Apollos 15 and 17 paints a very different picture: 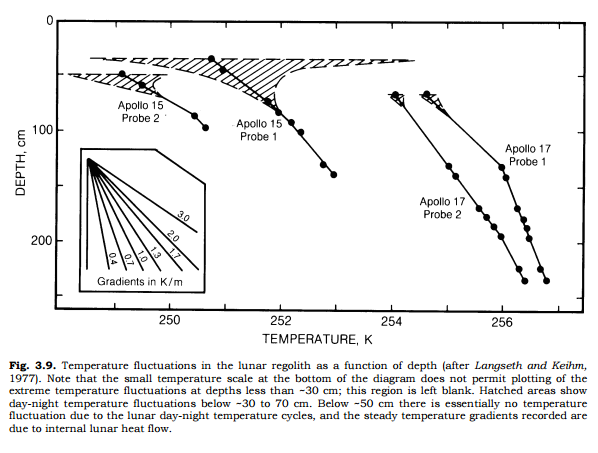 The above is from Ch. 3 of the Lunar Sourcebook, page 12 of 34. All measurements taken showed rising temperatures with depth of about 1 oC per meter. The largest known lava tubes on the Moon have skylights revealing depths of 100 m, so if that rate of temperature increase is taken, then the floors of such tubes should be about 80 to 100 oC warmer than the temperature near the surface, which means something like 60 or 70 oC. I've never heard any such figures talked about.

So, is there a cooling mechanism involved with these tubes? I wouldn't have thought so, being in a vacuum and only open to the surface through gaps that are probably very small relative to their full size. Why this apparent discrepancy?

Assume for a moment your 1 degree/meter change, and extrapolate it to the center of the Moon. The radius of the moon is 1737 km, so that would be over a million degrees, which is plainly wrong! The core temperature of the Moon, per this question, is estimated to be around 1200-1800K. Thus, I suspect 1 degree/km would be a much more realistic increase in temperature.

As for the article indicating a constant temperature, I suspect that is simply in comparison to the surface, which varies wildly with the time of the day.

As to why the difference with the Apollo measurements, I'm really not sure. I would expect the temperature to go down when digging, although there might be a period of some increase.

All of the Apollo missions landed in the early morning local time. I suspect that deep inside the temperature was fairly constant. The surface, however, had lost it's heat, and was only just starting to warm up. I believe the diagram was intending to show just the gradient, and thus did not show the portion of quick change near the surface, nor the flattening out below the surface.

Also note that the Apollo data shows the temperature is more or less constant at those depths, across many different regions, and is in the range that the Science@NASA article indicated.

EDIT: After thinking about this more, I think I understand what is going on. The top 50 cm is largely dominated by the day/night cycle. The next few meters below will tend toward the natural internal temperature of, say, 100m below the surface (Unknown from present data). The temperature cools as you rise from there, but I suspect it will follow an exponential decay, the start of which is seen in the Apollo 17 data. Bottom line, I suspect that the bottom of a 100m lava tube would be warmer than the temperatures listed, but still likely be below the freezing point of water.

Not the answer you're looking for? Browse other questions tagged the-moon planetary-science temperature lava-tubes or ask your own question.