How fast can the space shuttle change its attitude in space?

How long does it take to the space shuttle to change its orientation while operating out of the Earth's atmosphere, either by turning or rolling? I.e. what is the average/maximum rotation speed? What is its maximum acceleration while performing these maneuvers?

What is the technical limit given by mass and thrusters' power? What about limits dictated by crew safety or other similar concerns?

I can answer the "average" part. Here's a table from my usual go-to source for openly available Shuttle details, the Shuttle Crew Operations Manual, page 1009. 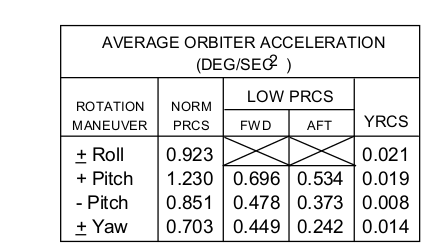 (The RCS system was divided up in two ways - a forward pod in the nose in front of the crew cabin, and aft pods located to the left and right of the vertical tail. Within each system, there were Primary thrusters (~900 lbs thrust) and Vernier thrusters (~25 lbs thrust). Each pod had an independent propellant system. The two aft pods could be interconnected, or cross-fed to the Orbital Manuevering System engines. There was no interconnect to the forward pod.)

So much for accelerations. For rates, everything depended on the Digital Autopilot settings, which were extremely flexible and reconfigurable, and therefore highly complex. The settings could be pre-loaded or changed by the crew in flight. Rotation rates and deadbands varied widely depending on mission phase, payload operations etc. Here are a few examples from the same source:

Re: the A7 and B7 nomenclature:

For some more detailed DAP settings, here are the tables for the last Shuttle mission, from the STS-135 Orbit Ops Flight Supplement. (starts on page 34) 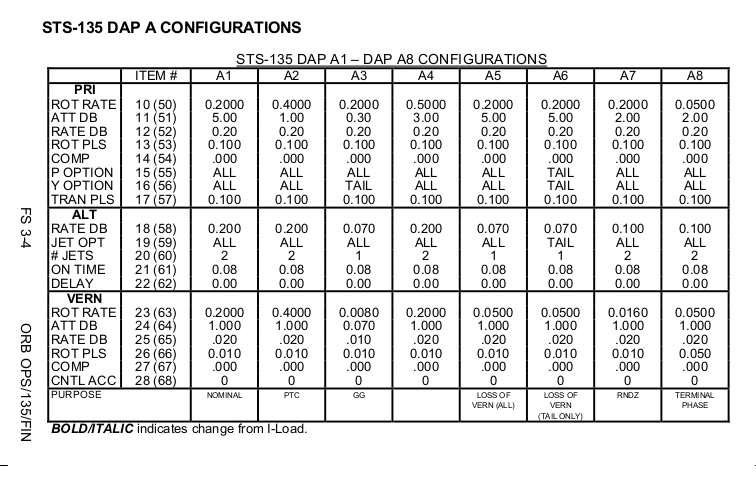 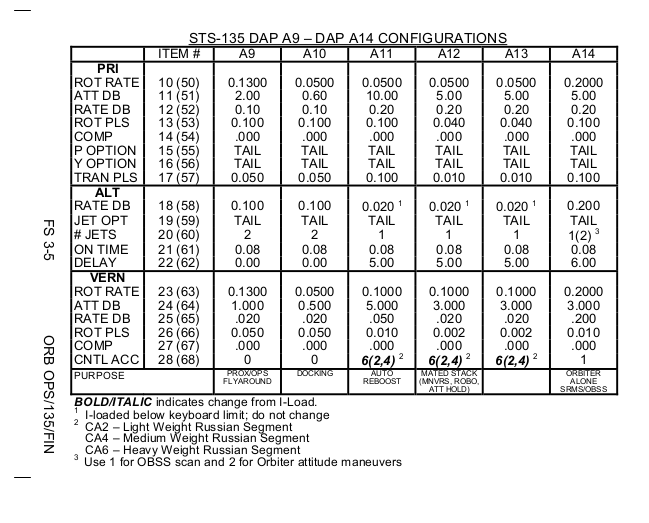 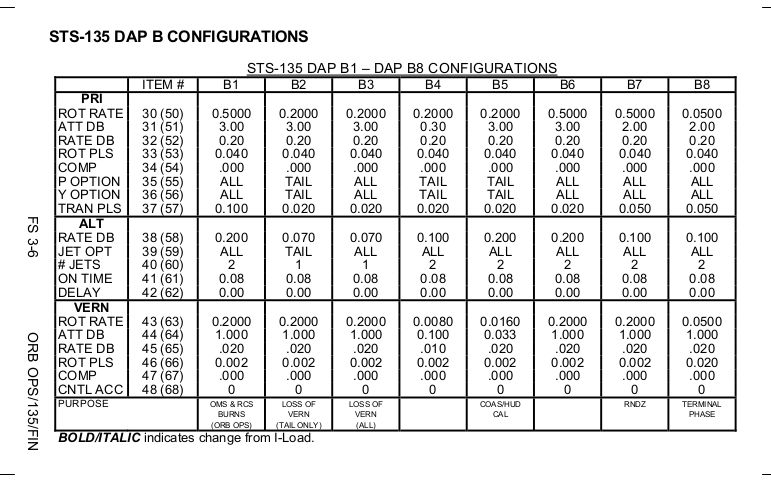 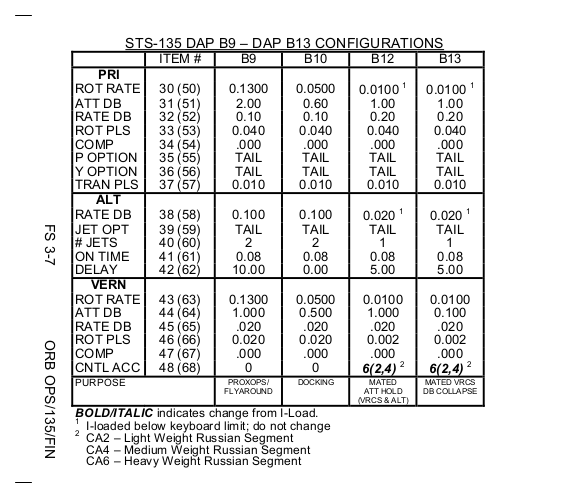 Here's a brief writeup on the Orbital DAP. There's much more at the source.

The rotation rates and dead bands, translation rate and certain other DAP options can be changed by the flight crew during the orbit phase using the DAP CRT display. The flight crew can load the DAP with these options in two ways: one option set may be accessed by depressing the DAP A push button on the orbital DAP panel, the other by depressing the DAP B push button. For convenience, each planned DAP configuration is given a number and is referred to by that number and the DAP used to access it. Typically, the DAP A configurations will have larger dead bands and higher rates than the DAP B configurations. The wide dead bands are used to minimize fuel usage, while the tight dead bands allow greater precision in executing maneuvers or in holding attitude.

The RCS DAP can operate in both an automatic and a manual rotation mode, depending on whether the flight crew selects the auto or man push button light indicators on the orbital DAP panel. The manual mode is also accessed when the RHC is moved out of its detent (neutral) position. In both the automatic and manual modes, the rotation rate is controlled by the selection of DAP A or B and the information loaded in the DAP config display. In addition, in automatic, the DAP determines the required attitude to be achieved from universal pointing and then computes the RCS jet fire commands necessary to achieve these requirements within the current set of dead bands. In the manual rotation mode, the RCS DAP converts flight crew inputs with any of the three RHCs to RCS jet fire commands, depending on whether pulse, disc rate or accel is selected on the orbital DAP panel. Simply, when pulse is selected, a single burst of jet fire is produced with each RHC deflection. The resultant rotational rate is specified on the DAP config display. When disc rate is selected, jet firings continue to be made as long as the RHC is out of detent in order to maintain the rotational rate specified on the DAP config display. When accel is selected, continuous jet firings are made as long as the RHC is out of detent.

The flight computers limited the rates in all directions allowed, however it was possible to disable those limits. This was automatically done for 2 and 3-engine out scenarios. I suspect the limits were set by K-Load pre-processing. There were not hard limits as numbers typed into the code.

The shuttle is a rate control system. Rates of roll, pitch and yaw are requested/introduced, unlike with other aircraft which use deflection-based controls. If you introduce a roll in 1 direction, to stop, you must introduce the exact same force in the opposite direction. The pilots learn to fly the shuttle with this in mind. Even in atmosphere, it is still a rate-control system. They do not pull back on the stick for very long. They pulse the stick to introduce and counteract those rate inputs.

Source: I wrote or reviewed the code that disabled the rate limits on 2/3-EO flight regimes.

Not the answer you're looking for? Browse other questions tagged space-shuttle attitude or ask your own question.

10
How hard was it for the Shuttle to perform attitude control for the entire ISS? Did they have to calibrate?
6
Space Shuttle Orbiter VRCS
6
RCS jet select algorithms (e.g. in space shuttle)?
2
What lateral and rotational accelerations can a spacecraft achieve?

19
Passive attitude stabilization with magnets - are there studies based on actual flight data?
14
What is so difficult about the ISS zero propellant maneuver?
2
How can I compute the attitude of a satellite given its yaw, pitch, roll, and velocity?
9
Coordination of RCS on Apollo CSM/LM
11
What ever happened to SpinSat - did it work?
3
How many times would two astronauts have to run around Skylab to turn it by 10 arc minutes?
4
How would the shuttle perform various attitude changes during ascent?
4
Did the Space Shuttle crew have to worry about monatomic oxygen?
4
Space shuttle state propagation---constant acceleration during cycle?