Which orbital maneuver is currently regarded as the most viable for a human mission to mars?

I'm aware that there is no best way to get there, just the most accepted way. Each maneuver will have its pros and cons. I'm just asking what is the current consensus on which orbital maneuver to perform?

EDIT: In order to clarify entirely what I mean, I am only concerned with transfer orbits such as Hohmann, bi-elliptical, etc. I am doing a school project that requires me to calculate the math behind an orbital transfer to mars for a human mission. It is nothing TOO technical but I still want it to be correct nonetheless, and I was curious to know which orbital transfer I should choose for the calculations.

In order to clarify entirely what I mean, I am only concerned with transfer orbits such as Hohmann, bi-elliptical, etc.

It's none of those. Both are for transferring from one circular orbit to another, and with both orbits on the same orbital plane. Neither Earth's nor Mars's orbit is circular. Mars's orbit is notably non-circular, with an eccentricity of 0.0934. Mars's orbit is inclined with respect to Earth's orbit by 1.85 degrees. This is more than enough to make a Hohmann transfer a useless fiction. (Aside: Even if the orbits were circular and on the same plane, a bi-elliptical transfer wouldn't make sense for transfers from Earth to Mars. The orbits are too close to one another.)

Now do this over and over and over again, but with different departure times $t_1$ and arrival times $t_2$. Generate a contour plot with departure dates and on one axis and arrival dates on the other, and eventually you'll come up with something like this, from
"Porkchop" is the First Menu Item on a Trip to Mars:

This is a porkchop plot. The blue contour lines show the energy (here in terms of C3) needed to transfer from Earth to Mars in 2005. (Note: Since we're interested in getting from Earth to Mars (or back), it makes more sense to use C3 rather than delta V.) Note that the transfer orbits are markedly non-Hohmann. A Hohmann transfer would take about 275 days. The optimal transfers instead take about 200 days (short way) and 400 days (long way).

I am doing a school project that requires me to calculate the math behind an orbital transfer to mars for a human mission.

You didn't mention what level of school this project is for. If the above is over your head, you can ignore all that and use the fiction of Hohmann transfers. If it's not over your head, this is exactly what is done to calculate transfer orbits to Mars at JPL.

The best trajectory depends on many factors, most importantly things like: when you want to get there, how long you want to stay, and whether you want to optimize for time or for ∆v expenditure.

Optimizing for time reduces radiation exposure and consumables requirements for manned missions; optimizing for ∆v gives you more payload for a given size of launcher.

NASA has a sweet trajectory browser that lets you explore your options with given constraints.

The best from my understanding is a 2 year free return trajectory, with launch windows fairly close to the time of a Hohmann transfer. It involves a departure velocity of 5.08 km/s, 2 years to return to Earth, and 180 days to transit to Mars. Source is "The Case for Mars". 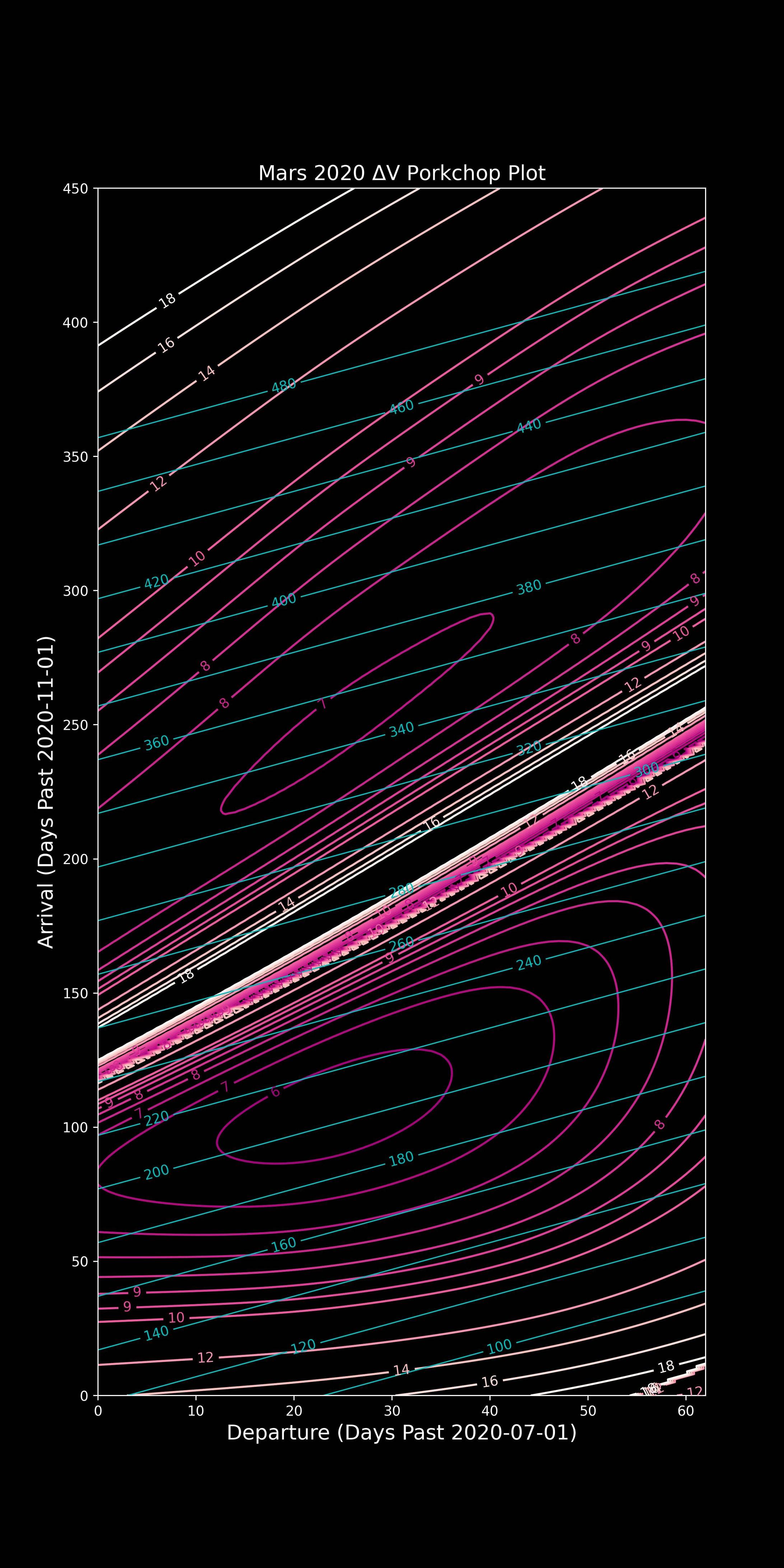 There are good answers here already, so I am just adding context / information about porkchop plots and the difference between the "short way" and the "long way" when it comes to Lambert's problem.

The plot above is of the 2020 launch window from Earth to Mars. Note that this is a delta V plot, not a C3 and V infinity plot, which splits the 2 burns in a Lambert's transfer (the initial burn to leave Earth and the final burn to arrive at Mars).

Mars 2020 departed from Earth 2020 July 30, which on this plot would be at x = 30. It arrived at Jezero Crater on Mars on 2021 February 18, which is y = 110 in this plot. This point is within the delta V = 6 km/s contour, which is the lowest on this whole plot. That is why porkchop plots are a good tool for figuring out first order estimations for interplanetary missions (in this case we are ignoring flybys).

Some context on the short way and the long way. As was explained in another reply, the short way is when the change in true anomaly of the trajectory is less than 180 degrees. On a porkchop plot, these trajectories are the ones that are under the gap in the plot. Here is a 3D plot of what that would look like (this is roughly the trajectory that Mars 2020 flew): 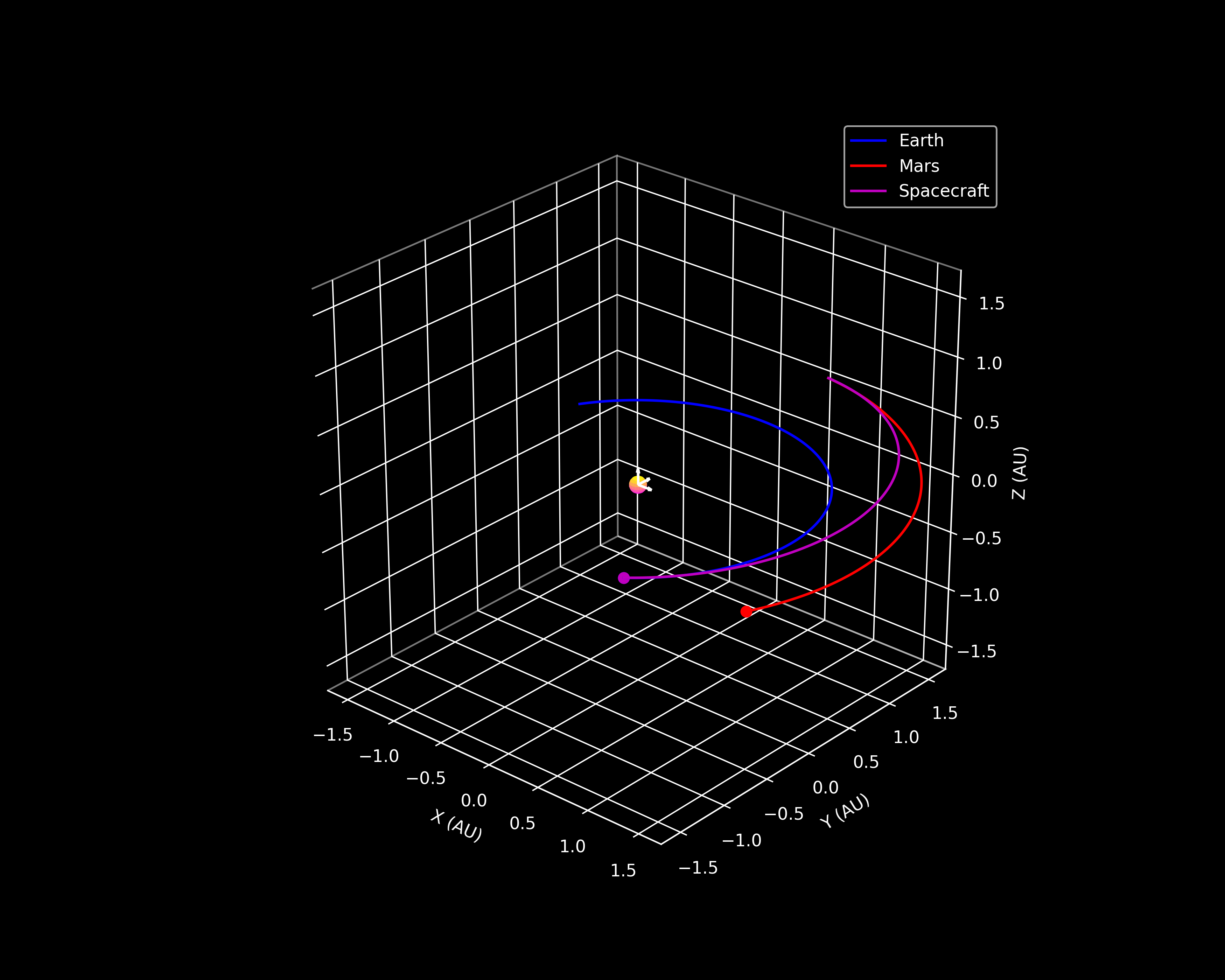 The long way is a trajectory where the change in true anomaly changes by greater than 180 degrees. These trajectories would be above the gap in the porkchop plot, and they look something like this: 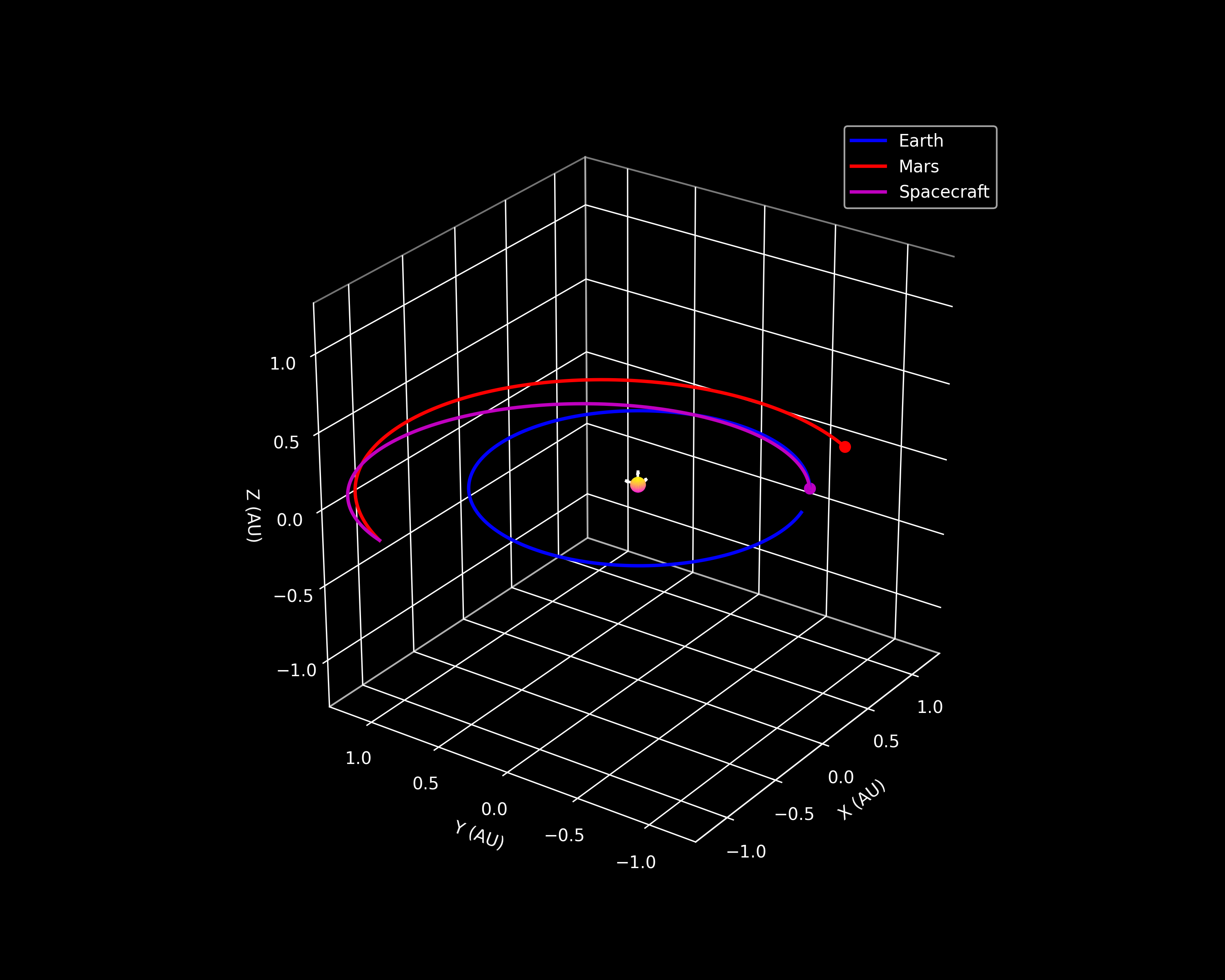 In practice, it wouldn't really make sense to use the long way if the delta V would be the same for the short way, since it adds more travel time. Unless maybe there was an asteroid or something of interest along the trajectory that would make it a good idea.

Not the answer you're looking for? Browse other questions tagged mars orbital-mechanics nasa orbital-maneuver or ask your own question.

4
When sending a probe to Mars, how is the optimal travel path calculated?
6
How do you plot a porkchop plot like this one?

11
GPS / Iridium for human presence on Mars?
1
Calculating hyperbolic orbit elements for interplanetary intercepts
3
What are common guidance strategies for a finite orbital maneuver?
49
Game for teaching basics of orbital mechanics
8
What is the smallest body in which a sling shot maneuver can be performed?
11
What orbital mechanics toolkits available today are suitable for a real-time simulator?
3
Find the jump condition of the mass costate of a Launch Vehicle ascent problem solved via an indirect method (Pontryagin Minimum Principle)
5
Does the short-angle solution of Lambert's Method break down for very Delta-V intensive maneuvers?