What were the Space Shuttle's rules about flying through clouds?

I have heard that the tiles on the space shuttle were sensitive to being wet, in that they might be damaged. I recently saw this photo, ported to be of the Space Shuttle launching. It struck me as weird, having flown through clouds, which contain significant amounts of liquid water. What were the flight rules for flying through clouds with the Shuttle? 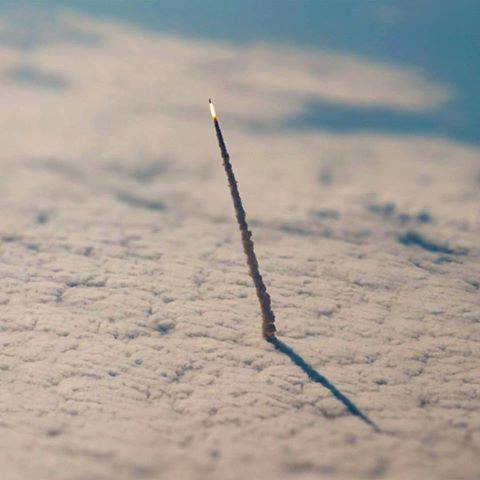 Based on the picture I assume you are asking about launch constraints due to clouds (versus cloud rules relating to shuttle entry and landing). Fortunately there is a nice human readable summary here, and the cloud rules are

Disturbed Weather: Do not launch if the flight path is through any non-transparent clouds that extend to altitudes at or above the 32 degrees F level, which are associated with disturbed weather producing moderate or greater precipitation, or melting precipitation, within 5 nautical miles of the flight path.

Thick Clouds: Do not launch if any part of the planned flight path is through a layer of clouds within 5 nautical miles, is 4,500 feet thick or greater, and the temperature is between 32 degrees F and -4 degrees F. Launch may occur if the cloud layer is a cirrus-like cloud that never has been associated with convective clouds, is located entirely at temperatures of 5 degrees F or colder, and shows no evidence of containing water droplets.

Smoke Plume: Do not launch if the flight path will carry the vehicle through any cumulus cloud that has developed from a smoke plume while the cloud is attached to the plume, or for the first 60 minutes after the cumulus cloud detaches from the smoke plume.

Direct visual observation of the shuttle is required through 8,000 feet. This requirement may be satisfied using optical tracking sites or a forward observer.

– A cloud ceiling of 6,000 feet is permitted for short- duration launch windows if all required range safety instrumentation systems are functioning.

b) The vehicle can be seen by the Eastern Range airborne and/or the ground forward observers through 8,000 feet and they can communicate with the flight control officer.

There were other weather related constraints at the link provided earlier.

There were weather constraints for the abort landing sites as well.

And, there were many and different weather rules for landing. Also summarized at the link.

23
Why did NASA collect so much data about electrical phenomena at the Apollo 13 launch site?
18
Did any of the Space Shuttles land through rain or rainclouds?