How much reentry speed did the Shuttles shed by doing a series of sharp turns?

Jerard Puckett mentioned in The Pod Bay yesterday that Shuttles did S-Curve maneuvers back and forth across their reentry trajectory to shed speed. After a bit of looking, I found some reference to this, but not much. In the Kerbal Space Program Forum this thread mentioned it:

Also, space shuttles would re-enter in a rolled attitude to steepen their trajectory (i.e. the wing's lift was directed sideways not up). The roll would result in a cross-track velocity component but roll reversal maneuvers were used to "sway" the re-entry trajectory back and forth across the target landing site.

And they were discussing the photo below, of Atlantis starting reentry, I guess taken from the ISS, which shows how the maneuver looks, seen from behind and above. Atlantis is the bright spot, engulfed in plasma, doing a turn: 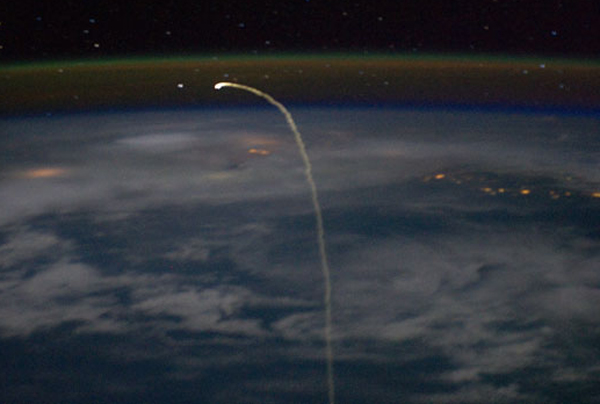 How much of their velocity did the Shuttles shed this way? Was it a critical part of the reentry process?

It's a bit of a misconception that the shuttle used S-turns to slow down. To quote the Entry, TAEM, and Approach/Landing Guidance Workbook by the United Space Alliance:

What it's saying is that the ideal reentry strategy is to simply point the nose at the landing site and control how fast you're dissipating energy by controlling angle of attack (alpha). A higher alpha will result in more drag, and it's easy to make quick adjustments to get the level of drag you need.

However, in order keep the orbiter both controllable and protected by the thermal protection system, it had to be flown at a particular alpha (40° for most of entry) with no more than 3° of variation. This meant they had to use different means to control drag, and the way they did it was by controlling the lift vector.

A steeper bank angle meant that the lift vector would be more sideways than up, which would cause the shuttle to descend quicker, and, as you descend, the air gets thicker, which causes more drag. A shallower bank angle will slow your descent and keep you in thinner air for longer, which minimizes your drag.

But there's a problem with using bank... it starts to turn you off course. So the solution is to use roll reversals (aka s-turns) to keep you pointed towards the landing site.

Now, to sort of answer the literal question you asked (how much entry speed was bled off during the s-turns): most of it. The first roll would occur at nearly orbital velocity, and entry guidance ended at 2500 feet per second (Earth-relative velocity). After entry guidance ended, TAEM (Terminal Area Energy Management) guidance began, which primarily used alpha for energy management. Once the orbiter was subsonic, the speedbrake was also used for energy management.

Not the answer you're looking for? Browse other questions tagged reentry space-shuttle trajectory or ask your own question.